Samantha DeRose is a colleague of mine, one who is also moonlighting as a stand-up comedian.  She's brilliant, funny and got a ton to say, so let's get to it right now. 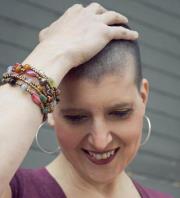 DSD: How did you get into stand-up comedy?

SR:  My mother blames my father.  I’ve always been the family buffoon.  My father always made me do impressions when I was little...I did a bad ass Richard Nixon.  I’d do it now, but it’ll lose its comedic appeal in print.

Then it was the old “my friends always told me I was funny” spiel, but you know, just because your friends think you’re funny doesn’t mean the rest of the world shares that opinion.

I’ve been writing off-the-wall observations since I was a kid.  I’m pretty sure my sister & brother got more than they bargained for when then snooped in my diary.

About 5 years ago, a friend suggested that I take my musings to the comedy stage and naturally, I did nothing.  Until one day, when I was going through a rough time in my life , a postcard arrived in the mail.  In an effort to pull me out of my funk, my friend had signed me up for a beginner’s level comedy course at Gotham Comedy Club in NYC.
DSD:  Tell us a story, as we all have a bit of stage fright:  What's your best performance?  Why did it work so well?

SR:  So I’m guessing performance issues are universal.  My best show was my first road gig in front of a crowd of 400 people.  I was opening for comedians whom I had really admired.  The day before the show, the comic who had been my hero, snubbed me big time.  My confidence was pretty much in the toilet.

So I meditated for the first time in my life.  An hour before the show, I sat in my hotel listening to Tibetan new-age music and visualized my set as a complete success.  And it was.  What really helped me was being able to actually “see” myself as being successful, which is really essential in everything that we do.

People actually wanted to take photos with me after the show.  OK.  Two people, but ya gotta start somewhere, right? One, a college freshman, majoring in education, had really loved my bits about the teaching.  Another was a woman who had just gone through some of the same difficulties that I had experienced in the past.  She said that it was the first time that she had laughed in about a year.

I took the obstacles in my life and turned them into something that people could laugh about.  It was honest and that’s why it was successful.

DSD: Reverse it.  Have you bombed?  How'd you deal with that on stage?  As writers, we deal with bad reviews, but those are filtered by the text on the screen or on paper.  We rarely see the people who don't like our work.

SR: I bombed miserably sister’s 50th birthday party.  My aunt thought that it would be a “hoot” if I did a set in front of all of our friends and relatives.  Because it’s so easy coming up with a set that appeals to an audience whose ages range from 2 years old to 97.

After a healthy bout of nausea and a glass of wine (or 12) I bit the bullet and bombed.  I can still see my mother’s head hanging in shame.  It’s one thing to bomb in front of people you’ll never see again, but family and friends?  I think I’ll stick to face painting at family parties, thank you very much.  Then again, we kind of don’t talk about the face painting incident either.  They were CIGARS!  I swear (I seriously have pictures).

DSD:  To me, as a novelist, writing is very individual.  I don't worry too much about the audience until it's too late and the book is already out there.  When you write your material, do you consider your audience?

SR:  I definitely alter my material for different audiences.  Clearly I learned that lesson at my sister’s party.  We all have different personas depending on our environments.   I’m a mom, I’m a teacher, and I’m a comedian.  I present myself in differently depending on who’s around.  And the same holds true for comedy.  My set at a cancer benefit for Gilda’s Club last year was quite different than the set that I just did at a bar in Newark two months ago.

That’s what I love about the art form though.  I can take the same premises and rewrite them to appeal to different audiences.

DSD:  What is your writing process?  Is there a way to know if a joke is funny or not in advance or does it need that audience approval?

SR:  The problem is that I find potential humor in everything.  I’m constantly writing premises down (mainly on the envelopes of unpaid bills). Then it’s a matter of trying those bits in front of different audiences, rephrasing, and trying different timing, until the jokes get solid laughs.  Most of the time, jokes in their final stages look drastically different than what they looked like on the back of the PS&G bill (maybe because the lights had been cut off).  But it’s important to remember that nothing is ever garbage.  I often revisit old stuff that might not have worked in the past and try the bits in a different context.  It’s pretty cool when the jokes end up working a year or two later.

DSD: Who are some of your inspirations?

SR:  My family, friends, and my two sons are constant sources of material and inspiration.

I’m really inspired by the comics that I see in local shows, too.  My friends in the comedy community are so dedicated to the craft and really make me want to push myself.  I also watch a lot of up-and coming-comics on YouTube.  There’s a lot of talent out there just waiting to be discovered...and they’re just a click away.

DSD:  Okay, I've waited long enough to mention it, but it appears you have shaved your head. The picture at the top of this post is a dead giveaway.  Why?

SR:  I was trying to think of a new way to embarrass my mother since the birthday party incident.  She wasn’t embarrassed (by the haircut).   And contrary to what people think about teachers, it had nothing to do with random drug testing. Truth.  I’ve been teaching for 12 years and I’m always trying to find ways to inspire my students, not only to do well academically, but also to help others.  I told my students that I would raise $10,000 for St. Baldrick’s Foundation for Childrens’ Cancer Research and shave my head publicly if they all passed my class for a marking period.  It’s a cause very close to my heart as I lost my brother to cancer and I taught several students who had battled the disease.  Suffice it to say, my students passed, I’m bald, and we’re steadily reaching our $10,000 goal.

DSD: You're a teacher, what is your opinion on the state of education in the news, government, or world right now?

SR:  Loaded question.  The modern American classroom is a catch 22.
Today’s students face a number of issues before they even enter our classes from poverty to transience to hunger to pregnancy, just to scratch the surface. Have I mentioned budget cuts, layoffs, and overcrowded classrooms?

The catch 22 is do teachers try to get through their curriculum first or tend to their students’ issues first?

Please show me where standardized testing factors all of those components into the final equation when determining teacher effectiveness.

In the past, teachers had the support of parents, administrators, boards of education, and politicians.  Teachers could patch up the hole if one component went missing. But now it’s as if all of the components are gone EXCEPT for the teachers, yet they’re to blame.  Go figure.

This is the worst analogy to make but here goes.  I have always loved being a teacher but now I feel like I’m in a relationship where I’m in love and the other person doesn’t love me back.  You know what I mean?  It’s that point in a relationship where you try everything in your power to make it work and your heart is breaking but deep down you know the other person is just not that into you.

DSD:  I do know exactly what you mean.  We all have that love of the job, but... Sigh.  Meanwhile, do you find any similarities between teaching and stand-up comedy?

Great segue.  Yes, there are definitely similarities. Teachers are constantly working on and revamping their subject matter to make it relevant, meaningful, and engaging.  And that’s exactly what the stand-up comic has to do.  You have to develop relevant material, establish a rapport with an audience, make sure that you don’t isolate them, and ultimately leave them wanting to come back again.  And the last part is the hardest in both cases (particularly with students).

DSD: Any upcoming gigs you'd like to plug?  A website?
SR:  I’m producing and performing in a show at The Duplex in Greenwich Village on June 22, 9:30 pm with great comics who have performed all over the world and even written for well-known actors such as Jane lynch.
I’ll be at Otto’s Shrunken Head on 14th St. in Manhattan on June 13 and July 6 at 6pm.
And I’ll be appearing in Montclair, NJ at Tierney’s Tavern on July 8 .at 8:00 p.m.
My website is www.samanthaderose.com
Thanks, so much Samantha!  And, anyone who wants to donate to St. Baldricks, just follow the link.
Or, you can also follow her her on Twitter!

Great stuff. Shame I'm not close enough to the city for this stuff.

My touchstone on this subject continues to be Irene Gallo's collected remarks about what art directors look for in a portfolio site. She stipulated the most important features as being the ability to save to or drag to the desktop right from the full image, and full-image previews. This solution only misses the latter.
mehndi

By Scott D. Parker A couple of weeks ago, I was talking to my cousin and he asked about any upcoming books I’ve written. I mentioned “...