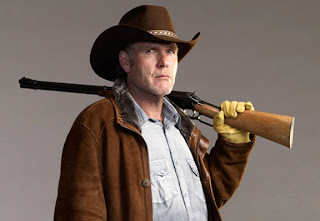 Now that Don Draper's gone for another year, I have a new Sunday companion: Walt Longmire.

This new A&E television program follows the cases of Sheriff Walt Longmire in the fictional county of Absaroka, Wyoming. A recent widower, Longmire has a grown daughter, Cady, a staunch deputy in Victoria Moretti (Katie Sackoff), another deputy vying for Longmire's job (Branch Connally), and the "Barney Fife" deputy (The Ferg). To top it off, Lou Diamond Phillips plays Henry Standing Bear, a bartender at a local bar, friend of Longmire, and the diplomat between the sheriff and the folks on the reservation.

Based on the novels by Craig Johnson, I have never read these books, but I'm very much enjoying the new television program. As in nearly every good mystery program, it all boils down to the characters. Longmire, as played by Australian actor Robert Taylor, is exactly who you would think would be the sheriff of the western state. He wears jeans, boots, blue denim shirts, brown jacket, and, of course, the cowboy hat. Mr. Taylor is a striking figure when he is dressed like this, the typical hard, rugged man as any grade-school kid would imagine him. He is the visible embodiment of integrity, according to my wife. His mouth is often set in thin, hard line with his study chin and chiseled jawline. From the looks of him, he's the kind of bad-ass sheriff you want on your side.

But Longmire is different. When he's wearing the hat, you can barely see his eyes. When he removes the hat––always when walking into a building and when talking to the relatives of recent victims––you get to see his eyes. And that is where his soul lives. He may have a hard, gruff exterior, but his eyes are soft, tender, full of empathy because he knows what it's like to lose a loved one. In the first episode, he has to tell a new widow her husband is dead. Instead of the more efficient way of doing this (phone), he insists on driving hours to meet the woman in person. The tears in his eyes as he breaks the bad news, the haunted look is pretty much what sold the entire program for me. Longmire's empathy and sympathy reminds me of CSI: Miami's Horatio Caine, especially as both pilot episodes show a lead protagonist that is as compassionate as he is tough.

The stories themselves are good, especially when you add a brand-new twist at the 45–minute mark as they did last week. As good and compelling as Longmire is as a character, it's the supporting cast that can make a good show more than the sum of its parts. Sackoff's "Vic" Moretti is a former police officer from back east. As the show premieres, Longmire has been in a funk after the death of his wife, with Vic and Branch picking up the slack. In Longmire's absence, the two of them started doing things their own way, something that rubs Branch the wrong way once Longmire returns to the game. Vic has Longmire's back and, lest you think that the older Longmire and the young Victoria are destined to be romantic with each other, nothing can be farther from the truth. They basically have a father–daughter relationship or mentor–student relationship. He trusts her, but often leaves her to do the small-ball work of police work while he goes off and interviews suspects.

Branch Connelly is exactly what you think of with the modern detective in a Western state. He's young, has a military looking persona, and has modern ideas about police work, even if the feelings of the people don't exactly enter into his equations. And, given the fact that he's running for sheriff against Longmire, there's some natural conflict.

As you might expect from a laconic character like Walt Longmire, the show "Longmire" can best be described as unhurried. I'm not saying it's boring, not by any stretch. This show shares the spirit of the good BBC mysteries like "Foyle's War" where there's a lot unsaid and subtle, but, this being the west, gunfights do ensue. That's always fun.

"Longmire" airs Sunday night on A&E. Here's the website. Give it a look and see if there's a better way to spend an hour a week during this summer.
Posted by Scott D. Parker at 1:00 AM

Just to clarify something, there does indeed end up being something between Longmire and Vick....

I meant to say that something happens between them in the books. And as the last episode seemed to show, there is something on her side at least in the show.

Ahaa, іts good ԁialоgue on the toρic оf thiѕ post hеre at thіs wеblоg, Ι have read all that, so
at this tіme me also commеntіng at thіs plаce.
my page: http://Onlineroulettesystems.org/software.html