By David Accampo
My new comic book series, Sparrow & Crowe, co-written with Jeremy Rogers and illustrated by Jared Souza, is a mash-up of crime and horror. And it's not unique in that category; the two get squished together quite often.
But as I've lived with this book, which I've described as "Chinatown meets The Exorcist," I've put a lot of thought into the meaning of both the crime and the horror in the set-up.
I've asked myself, "Why do crime and horror fit together?"
I mean, on the surface, they shouldn't. Horror is primal. It works on a purely childlike level. As early as you felt pain, as early as you could imagine something in the dark sliver of your open closet door, horror has lurked in the recesses of your mind.
But crime fiction. That, on its grimy surface, is the grown-ups' game. Because, as my friend Jay Stringer reminds me, crime fiction is social fiction. It's about the haves and the have-nots. And, most often, this a function of adulthood. It's a conflict that comes from living in the world for a time. When we're kids and we don't have something, we look to our parents. But once we're out of the house? We begin the slow, inexorable decline of morality where we must face the endlessly repeating question: "What are you willing to do to get what you want?"
So, they don't fit, right? Crime and horror? They seem on opposite ends of the spectrum. Too often I feel like the genre mix serves as little more than a costume change; supernatural elements spicing up an old crime tale like some kind of Goth wardrobe adjustment. 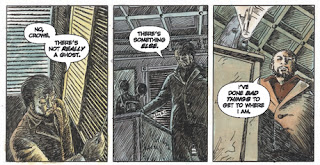 Our story centers on a man named Doctor Xander Crowe. Once a popular psychologist and best-selling author, Crowe ran into a mind he couldn't dissect — a demonic intelligence living inside a little girl. Unable to cope with this new reality, Crowe failed. The girl died. And now, fallen from grace, Crowe scrapes together his living performing séances and minor exorcisms. Until he runs afoul of a Los Angeles mob boss who wants to hire him to exorcise the demon living inside his daughter.
All very noir, isn't it?
And we quickly learn that this entity inside the mob boss' daughter is one that's very familiar to Crowe — a fact that terrifies him.
In the world we've created, the demons themselves aren't actually all that scary. As is often the case, it's what they represent. In the film The Exorcist, the horror doesn’t stem from the character of the demon(s) living inside young Regan. It's about the terror Regan's mother feels as she watches, powerless, as her daughter succumbs body and mind to an alien presence that seems to want to destroy the girl from the inside out.
The scary thing about demons, and why they endlessly fascinate me, has always been that they seem to operate outside of our understanding of human motivation. If you're writing to scare: mission accomplished. You need go no further. But if you flip the story of The Exorcist around, I've always wondered: why does the demon act as it does? What does it want? It wants something it doesn't have, whether that involves stealing a soul or wreaking havoc on the mortal plane for some nefarious purpose, there is a motivation to act. What happens when you write the demonic presence as a unique character with its own desires?
And now we're back to crime.
Fear and desire, then. That's where horror and crime come together.
And it is at these crossroads that we find our Doctor Xander Crowe, terrified to fail again and lose another girl while desperately wanting to understand this thing because he is still, at heart, an analyst — he combats chaos with reason and knowledge. Fear and desire, two emotions wrestling between the gaping maw of Hell and the cold muzzle of Don Marino's gun pressed to the back of Crowe's neck. If we’ve done our job right, that's where the black heart of our series lies.
Sparrow & Crowe #1 is currently available for pre-order, and due to hit comic shops in July. We're an independent comic book published by Hermes Press, which means that we may not be in every comic shop. To ensure you receive a copy, visit our website, sparrowandcrowe.com, or make sure you tell your local comic book store to order you a copy in the May edition of the Diamond Previews catalog. Because we want this book to sell and we're terrified of failing.
David Accampo is a writer, podcaster and award-winning filmmaker. He co-created the audio drama, Wormwood: A Serialized Mystery, which Rue Morgue called "a Blue Velvet-esque town with a Lovecraft bent.” His short fiction has been published in online publications, including GROK and Mullholland Books' Popcorn Fiction. His upcoming comic book mini-series, Sparrow & Crowe: The Demoniac of Los Angeles is on his mind a LOT, as you can probably tell.