A couple of years ago I went to a conference. I wrote about it here. Great fun.

Of course there was the $43 to get the urine out of Dave White's pants (totally my fault, but still).

And the hotel room that was around $200 a night. It's one of those where they tell you it's $120 conference rate or whatever but then there's tax and a separate room tax and then a separate room-with-a-door tax. I mean, it was Philly, so it wasn't like DC with its extra $87 for-the-hell-of-it tax, but it wasn't cheap.

And the conference registration fee, which was worth every penny.

I mean, you start adding up NoirCon and Bouchercon and Left Coast Crime and Murder in Muskego and one in Canada and one in Florida and Malice Domestic. You could go broke.

So maybe you have to choose. Or maybe you go to all of them and use your $150,000 advance to pay for hotels and bacontinis. I dunno.

I guess what I'm wondering is what many folks have asked me via email and in person.

Are you going? Why? Why not?

I guess it's become popular these past few years to say that people won't attend conferences because they can meet in the Gopher Chat Rooms and on MySpace, or whatever the kids are into now. You can twitter away all day chatting with people. You don't have to wait in line at a signing table to meet authors. You can shoot them a message online. Email them. MyFace chat. You can connect for free, without having to battle the "Bring Out Your Dead" piles of flesh at the Atlanta airport or $12 hotel bar bourbon.

Then you've got the folks who say that nothing beats hanging out in person and getting to know people.

But, as a man with fiscal responsibilities, I have to look at the ROI of something like a convention or conference.

I wouldn't give back my trip to NoirCon. Met some nice people there, as well as a couple of complete assholes.

So my thinking is that conventions and conferences are most certainly worth the time and the money -- if you choose what works best for you. For example, I doubt there's much overlap between NoirCon and Malice Domestic.

What do you get out of conferences that you don't get out of chatting online and emailing and MyFacing? 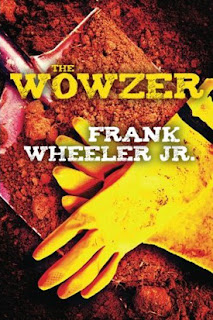 In the Arkansas Ozarks, old-timers spin tales of the Wowzer, a giant panther-like creature that decapitates those who wander too far into the woods. County sheriff’s deputy Jerry was raised on Wowzer stories, but they aren’t enough to stop him from carrying out his own business in the remote hills. Jerry’s more than a sheriff’s deputy; he moonlights as muscle for local drug traffickers, who sometimes need people to get hurt—or get dead.


Fortunately, Jerry’s pretty good at his job. And since Tom Haskell runs the sheriff’s office and the drug-protection racket, Jerry doesn’t see much of a moral dilemma. That is, until he starts thinking about getting out of the trade, and then things get complicated fast. For starters, Jerry’s girl Maggie flees the state after learning about a disturbing diagnosis tucked inside Jerry’s psych report.


And now Sheriff Haskell is dragging his feet paying Jerry his cut of the drug money. Is Haskell just reluctant to lose his top muscle? Or is he plotting to take out the man who knows his dirtiest secrets? Fans of hardboiled, “country noir” fiction will love gnashing on Frank Wheeler’s violent and darkly comic debut, sneaking a glimpse into the mind of a killer whose inner monster is about to be unleashed.

Because I love you all, I will send to one of our commenting people an electronic version of this book. So, to the comments, folks.

I actually remember the people I meet at conferences.

The internet is great, but it's so fleeting. Sure, you have a few hundred Facebook friends and Twitter followers etc., but who actually remembers you?

I hear you. Conventions and conferences were exiled from my budget around the time my second daughter was born (she's now 38). The choice between "family comes first" and "God, I have a good time there" was worthy of Solomon.

If you're serious about your writing, you'll go to all the conferences you can. It's called AN INVESTMENT.

If you're just writing to jerk yourself off, you probably won't go.

I've only been to two of them.

I loved NoirCon -- made some very nice friends, got some great books, learned a lot, and had what I would consider to be my ideal vacation. So, in that regard, it was totally worth the money. If I consider what else the same amount of money would have got me if I stuck around home -- a couple nice dinners, a few movies and popcorn in the theater, a couple beers at the bar -- then I would rather spend that money and go to NoirCon.

To me, the blogs and Facebook and Crimespace all lay groundwork for a conference. The panels and general BS sessions bring together a critical mass of writers that can generate interactions the web can't duplicate.

Plus, you never know who you might strike up a conversation with that leads to a good idea or contact of just some new writers to read. I'd never heard of Tom Shreck before I went to Bouchercon in Indianapolis, but liked his answers at a panel and asked him a question later that turned into a half hour conversation that not only gave me a good idea for some character development, but made me a fan. That's hard to do on line.

Yes, they're expensive, so I pick and choose. Bouchercon is my one given; I may give Noir Con a shot in Philly some year. I keep thinking about going to malice Domestic (I could sleep in my own bed), but every time i read the web site I think "Cozies" and I frigging hate cozies, so I wonder how well my time would be spent.

I mean, you start adding up NoirCon and Bouchercon and Left Coast Crime and Murder in Muskego and one in Canada and one in Florida and Malice Domestic. You could go broke.

Noircon was my favorite because of its small size. But even with that, I felt too old, too peripheral. So that is probably it for me. I do better at a distance.

In 1984, long before I started writing, I read The Greatest Slump of All Time, by David Carkeet, which became my favorite baseball novel and one of my favorite novels overall. Twenty-five years later I met the author himself at the Crimebake conference. I don't know how to put a monetary value on that experience, but I wouldn't give it up.

What? I've only been to Bouchercon, but I am hoping to go to Noircon this year. One of the highlights was meeting you, Patti! I hope you don't stay home this year.

I think Steve hit the nail on the head. You meet nice people and you meet assholes. I like going to conventions so I know who is nice and who is an asshole, and to chat up fellow writers, for it is a very solitary profession.

I love conferences and I'd go to all of them if I could afford them all, but there are so many... *sigh*

I had the opportunity to attend Bouchercon for the first time last year and I'm happy to say that it's definitely a convention I plan to attend every year. It was a great experience. But like you, I met some assholes... for realz like. A couple will never get another dime out of me. NEVER!

Attending WHC in Salt Lake would have been much more enjoyable if I had a friend to hang with. I was alone and so, so scared. When I had one-on-one time (not what it sounds like) with John Hornor Jacobs I didn't even talk. I froze. I think I actually pulled my phone out and pretended to be busy. All because he's so... so awesome that I felt awkward being around him. Nicest guy ever... gave me a hug. I was so star struck that I forgot to get a picture with him. Me... forgetting to take a picture? Clearly a memory to last a life time.

If finances will allow, you should attend the conferences that will benefit you the most. And don't worry, if I don't catch you at a conference, Steve, I'll be sure to look you up when we visit family back East.

And, Patti, meeting you was a true highlight of Bouchercon.

If I ever hit a lottery, I'm going to quit my job and flit from conference to conference, all over the world. I don't know how things are for authors, but for editor/commentator/bloggers like me, the contacts have been invaluable, quite apart from the fun. (Yes, don't be afraid to use words like contacts and networking when talking about conferences.)
================================
Detectives Beyond Borders
"Because Murder Is More Fun Away From Home"
http://detectivesbeyondborders.blogspot.com.

Congrats to Peter Rozovsky on the winning of THE WOWZER