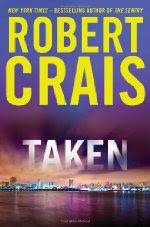 The best Elvis Cole/Joe Pike novels focus on their friendship. LA Requiem was a gem, digging deep into the past of the two heroes, finally shedding a light on some of Pike's past.

Now comes TAKEN, the most recent novel by Robert Crais, digs that hole deeper and what comes of it is the best Crais novel since The Watchman--perhaps even Two Minute Rule. The set-up is this: Elvis Cole is asked to find a college aged girl, daughter of an illegal immigrant, who's disappeared. Cole quickly discovers she's been taken by a Syrian who wants to sell illegal immigrants back to their families. And then, during his investigation, Cole is taken as well.

And only one man can find him: Joe Pike.

The book cleverly ratchets up suspense early, by playing with time a bit--centering on Pike's search before we even read about Cole's abduction. Each part of the book is a count up to the time Cole is taken.

But, as with the best Pike novels, we learn more about Pike's devotion to Cole. We see it in Pike's simple one word bits of dialogue. And we see it in his actions, when Pike goes to Cole's apartment.

The book is fast paced and action packed. If you've followed the series, you can't miss this one.

Meanwhile, Kindle owners, my own thriller Witness to Death is free for the next two days. Check it out!
Posted by Dave White at 3:00 AM

I'm with you on this, Dave. Robert Crais can do no wrong in my (actually his) book(s).

However -- in all critical honesty -- I found TAKEN less deep than Crais most recent books since LA REQUIEM. It was almost a throwback to the earlier Cole novels, written by a better Crais. Maybe that's not a bad thing. TAKEN is a great read, brilliantly structured and executed. I suspect Mr. Crais has spoiled me, though. I anticipate his annual novel from a distance and I expect a lot.

You mentioned Two-Minute Rule. To me, that one-off, featuring no serial characters, is his best novel yet. And I mean that as VERY high praise.