In A More Just World: Women's Fiction vs Lit Fic

I do not know Meg Wolitzer. I have never met her, nor have I read her books. I have no reason to believe that she isn't a remarkably nice person. And I hate to be disagreeable.

But she wrote an article called “The Second Shelf” that ran in the New York Times Sunday Book Review.

See, literary fiction is placed on the first shelf, almost all men, though there are a few women who sneaked in last century. (More on that later.)

Women’s fiction is placed on the second shelf.

Here’s where she gets rolling:

Recently at a social gathering, when a guest found out I was a writer, he asked, “Would I have heard of you?” I dutifully told him my name — no recognition, fine, I’m not that famous — and then, at his request, I described my novels. “You know, contemporary, I guess,” I said. “Sometimes they’re about marriage. Families. Sex. Desire. Parents and children.” After a few uncomfortable moments he called his wife over, announcing that she, who “reads that kind of book,” was the one I ought to talk to. When I look back on that encounter, I see a lost opportunity. When someone asks, “Would I have heard of you?” many female novelists would be tempted to answer, “In a more just world.”


She’s at a party and a man is nice enough to ask her about her writing. She doesn't say whether she asked him what he does. What she does mention is that he went to the trouble to engage her in a conversation about her work. How unlike the people I meet at parties. The people who drone on and on about themselves and their children. "I only escaped to tell thee about how little Ricky is in the top percentile of shoe-tying six-year olds."

So when Mr. Niceman asks about her books, she describes her novels as being about families and marriage, parents and children.

Now, let’s just take a look at that for a second.

What do you write about?
I write about marriages and families.
Are you a woman?
Clearly.

Now let’s look at it this way.

Seems to me the difference is in the describing.

Raymond Carver wrote about marriages and adultery and children and families. As did William Faulkner.  As did Hemingway. Hell, Julian Barnes and Martin Amis type away about families all the day long. But their books aren’t “about families and children.”

Look at Jane Austen’s Pride and Prejudice. That’s a book about economic situations and the necessity of compromise, isn’t it?

I suppose it’s true that women tend to enjoy reading “about marriages” more than men do, but marriage is often just the setting for the conflict, isn’t it?

I’m sure Meg Wolitzer knows this. She seems smart enough. As she mentions in her essay, she “took semiotics back at Brown University.” (Now, being from the South, I’m not terribly familiar with Brown University, but from her context I figured out that it meant she was smart. Anyway, I Googled it and, according to the internet, Brown is a very good school for people who can’t get into Harvard or Yale.)

But back to the point.

Maybe he would like reading a darkly comic story about the publication of a sex manual, about how the lives of the author’s children fell apart and how they’re managing now that the book is about to be reissued.

I could see that as a hilarious Martin Amis book. Or Nicholson Baker. Turns out, it’s a Meg Wolitzer book, The Position. Yes, THAT Meg Wolitzer. About the book, one Amazon reviewer says:

Meg Wolitzer is a master storyteller. In her hands, the lives of these six people are realistically interwoven and absolutely fascinating. A subtle mystery --- how exactly did the Mellow marriage end? --- threads through the plot.

If the characters are rather stock, and the musings on love, sex and family familiar, Wolitzer nevertheless bestows her trademark warmth and light touch on this tale of social and domestic change.


Now, up until that mention of “stock characters” and “warmth and light touch” the novel was sounding like something I might like. Now it sounds like what people dismissively call "women’s fiction." And I don't know what "domestic change" means, but it rather sounds like a matter about which I would not give one shit.

Of course, I’m not sure I understand the difference between “women’s fiction” and “literary fiction” these days.

Exploring Amazon, I came across a category called “Women’s Fiction” where I am listed, along with Jane Austen, Sophie Kinsella, Kathryn Stockett, Toni Morrison, Danielle Steel and Louisa May Alcott.


Tom Perrotta and Jonathan Franzen are also categorized as “women’s fiction,” she points out. She does not mention what Amazon considers “literary fiction.” 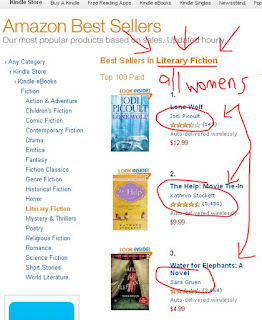 I looked for a women’s fiction category under Best Sellers, but didn’t see it.

So Jodi Picoult is tops in literary fiction. Oddly enough, the sky is still up there with the clouds.

Thinking back over books I’ve read, I know there just have to be some women authors who write what Brown University semiotics students would consider literature, right? Virginia Woolf is maybe too long ago. Sylvia Plath, maybe? Oh, what about Toni Morrison’s Beloved, one of my favorite books?

But some of the most acclaimed female novelists have written unapologetically and authoritatively about women. And the environment needs to be receptive to that authority, recognizing and celebrating it in order for it to catch. It seems no coincidence that some of the most esteemed women writing today — Toni Morrison, Joyce Carol Oates, Margaret Atwood, Doris Lessing, Marilynne Robinson — came to prominence at an unusual moment in time when the women’s movement could be felt everywhere. Stories, long and short, and often about women’s lives, suddenly mattered to the cultural conversation. This period, the 1970s and to an extent the early ’80s, initially appeared to create an entirely different and permanent reality for female fiction writers. Men were actively interested in reading about the inner lives of women (or maybe some just pretended they were) and received moral kudos for doing so.


There you have it. Beloved came along at a time in which men were interested in reading about women. Drat. Poor timing must be to blame for the second-shelf relegation of women authors such as Meg Wolitzer. Had they only been writing in the 1970s, these poor women would be on the first shelf with Morrison and Oates, those beneficiaries of well-timed fertilization. You know, much as Jane Austen was writing when men pretended to care about women. Mary Shelley. Flannery O'Connor. Edith Wharton.

Poor Brown-educated Meg Wolitzer, author of nine published novels, writing a 3,000-word essay in the Sunday New York Times about how women are stuck on the second shelf. Now I haz a sadz :(

Beloved won the Pulitzer for fiction in 1988, not because men were pretending to be interested in women. Beloved won, and is still read, because it is amazing, insightful literature, a piece of art that does not suffer from stock characters or a light, warm touch. Beloved is brutal and beautiful, an accomplishment of  style and substance we’re all privileged to read. And yet, this a book so full of cultural significance, so astute in its treatment of the human condition, of love, of marriage, parents and children, that it will be read as long as people have eyes to see. Yes, there is marriage in this book. But if you were to ask Toni Morrison what she writes about, I don’t think she’d say she writes “about marriage.”

Everyone reading Nicholas Sparks or Jodi Picoult or Suzanne Collins would have read Toni Morrison -- you know, in a more just world.

Waaa. Write the books, lady. People will perceive them as they do; nothing you can do about that. Write the best book you can. No one owes you the acclimation you think you deserve.

This attitude--and it's not unique to Ms. Wolitzer--reminds me of those people who make high six- or seven-figure incomes who whine because they they don't feel as rich as they think they should, often because they still see other people with more. She's a published and, apparently, respected author. That puts her in the literary 1%.

Shut up and write.

She has it in for Toni Morrison? Shit. We read BLUEST EYE and TAR BABY in college and those were some great books. Don't talk shit about Toni Morrison. You will NOT blaspheme in this mother fucking house, you hear?

The quotes you pull give some kind of backhanded slap to the people who do read her books, as if they aren't quite good enough.

A true publishing ghetto was what was once called "men's fiction." Those books all came out with numbers on the spine and were considered entirely disposable to the publishers. And I believe the money was not as good as "women's fiction."

Years ago, when I was in college, I got to interview John Lee Hooker. I asked him what it felt like to play for clubs full of white people. He didn't pause but said: "I like people who like my music."

While many women write what most consider "literary" novels and are marketed in such a way, many other women do seem to be pigeon-holed into what sells.

I understand a bit what she is arguing, but it seems that she should take it up with the people who decide whether a book cover is made of large fonts or cartoons of women.

Her complaints should be directed at her own publishers. Why haven't people heard of her? I don't know. Ask the people who aren't marketing her books the way she wants.

A lot of people wonder why they aren't famous.
It's nice to have people to blame that on.

Only a man would think women have it easy.

Another excellent post, Mr. Weddle! All good points here, but what I took away from it is the importance of a good pitch. Ms. Wolitzer's description of her own books is luke warm at best--I'd never know about the stock characters because based on her own pitch I'd never read them to begin with.

Something to think about when I'm talking Diary of Bedlam up w/ others. I get all apologetic sometimes, thinking, oh, you wouldn't be interested in it, it's historical fiction.

And just to be clear, I write popular genre fiction. For the most part, I don't care for literary fiction. The article doesn't impact my bottom line or my reception of 'literary' awards. But I still recognize the inequity of the current culture.