Quality or Quantity: Which is More Important 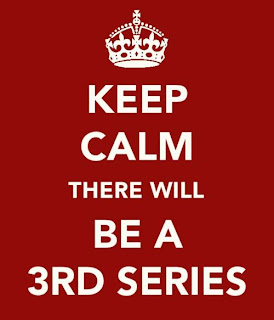 I saw this image on Facebook yesterday and it gave me quite the chuckle. I am, like a millions others, an avid Downton Abbey fan and have been since the first episode. The quality of the writing and acting to say nothing of the sumptuous costumes and sets sweep me away to a time I never knew. And the characters! Mr. Bates. Lady Mary. Carson the butler. In the hours I watch these two seasons I am lost to the modern world. Nary a telephone call is received in my house when Downton Abbey airs. Be ye warned.

When I mention "seasons," we Americans typical think about 20 to 24 hour long episodes. In fact, when one of my favorite shows gets an order for an extra episode or two, I count myself lucky. From September to May, I can count on nearly nine months of new episodes that make an American season of television. Naturally, not every episode is great, but you get a steady dose of your favorite characters each and every week. And, when sweeps months break, you get the "special episodes" which are often very good.

Not so with the British or, at least, the British material I see on this side of the ocean. Be it Prime Suspect, Foyle's War, or Downton Abbey, the British version of a season is vastly different. Foyle's War typically was three to five 90-minute episodes, movies really. Same for Prime Suspect. I'm not sure how Downton Abbey was broadcast in England, but here in America, PBS showed the second season over six Sundays, with a couple of evenings showing two hours to the usual one. Where the typical season of CSI: Miami lasts from September to May, we Downton Abbey fans had to content ourselves with a few glorious weeks in the winter of 2012. But oh the quality of the shows!

I would love to profess my love of quality over quantity, but I have to admit that I like both. And it all depends on the show. For something like Castle, CSI: Miami, Grimm, or Body of Proof, I want my morsel each and every week. I like knowing that, for an hour on one of these nights, I can sit back and enjoy some good television. But every now and then, I'll easily take fewer episodes of a great show like Downton Abbey because everything else about the show makes up for it. (Truth be told, I'd love to see what it's like to have 24 episodes of Downton just to see if its specialness would be diminished.)

Which way is do you prefer? Do you like the American way of a season (24 episodes, delivered weekly, with sometimes varying quality) or the British method (fewer episodes, greater quality)?
Posted by Scott D. Parker at 1:00 AM

For me, quality always wins out. The best TV shows I can think of all favour shorter seasons. I think stories don't really add up to 22-24 episodes. More focus on the writing, acting and directing. Less filler.

I also find most TV shows go on simply too long. I think 3-4 seasons is really the time to get in, tell your story and get out. 5 at a push.

How much greater would THE PRISONER have been with 8-10 episodes rather than (if I recall) 17?

How much better is THE WIRE for the fact it had a focused run, tight arcs and got out when the story was clearly done?

Contrast that against shows that go on for a decade, rebooting and retooling, padding things out, and leaving plot threads unresolved when actors jump ship and have to be written out? And by the time shows crack past 100-150 episodes, how many of those have been padding?

CASTLE is sadly starting to fall into this for me. Started out as a fresh and witty show that played with cliche, is now the very example of a show that's padding things out, trying to find ways to keep a story going that really needed to resolve at the end of last season.

I became hooked on the British method (though I didn't know what it was at the time) during HBO's heyday of THE SOPRANOS, DEADWOOD, and THE WIRE. That opinion has been cemented with JUSTIFIED, and the handful of standard, American-style shows I've tried to watch and had to give up on since.