The History of Mystery by Max Allan Collins 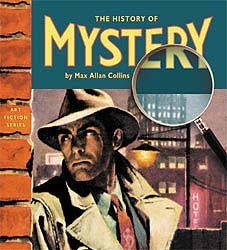 For folks like me, without the complete knowledge of mystery and crime fiction imprinted on our DNA or who came late to the mystery party, Max Allan Collins is a godsend. He has written The History of Mystery, a nice non-fiction book that traces the origins of crime fiction from the late 1800s until the 2000s. It's a large book, coming in at almost 12 inches square. That's perfect for what this book does best: present old paperback covers and movie art in a large canvas.

Starting with Edgar Allan Poe's C. Auguste Dupin, Collins discusses how the Pinkerton Detective Agency's real exploits gave rise to the dime novels in the 1890s and 1900s. When I read this book, I didn't realize Nick Carter was such an old character. There is, of course, an entire chapter on Sir Arthur Conan Doyle and Sherlock Holmes (natch) until you hit pay dirt: The Pulp Fiction Chapter. Here you've got gorgeous covers of the 1920s and 1930s: True Detective, Argosy, Detective Story Magazine, and, of course, Black Mask. All the main pulp characters are here: The Shadow, The Phantom Detective, The Spider, The Avenger, and others. As a reader, I drooled over all the livid covers of these great magazines. As a writer, I wised they were still being printed.

Dashiell Hammett and Erle Stanley Gardner each get their own sections. Cool and Lam even got an entire two-page spread complete with an original cover from Top of the Heap, the Cool and Lam story reprinted by Hard Case Crime.

Mystery comics are represented here. Besides the obvious Batman and Dick Tracy, there is Perry Mason (seriously?), The Saint, and Collins' own Ms. Tree, among others. Agatha Christie opens a two chapter section on cozier stories, including folks like Father Brown, Encyclopedia Brown, Nancy Drew, and the books of John Dickson Carr. Charlie Chan lands here as does Lillian Jackson Brown's Cat stories.

Once you hit the 1950s and 1960s, this is where paperback characters (Mike Hammer, Shell Scott, etc.) and those wonderfully lurid paperback covers take over. Again, drool commences. The ends with a section on TV detectives (Rockford, Harry-O, Magnum, and Jessica Fletcher) and some modern authors (Estleman, Francis).

All in all, if you want a nice, short (under 200pp) book with lots of fabulous covers and rare artwork, this is a good book to have. It's a coffee table book. Buy it and just set it out as a conversation piece. You'll likely find a whole lot of other people who love this stuff, too.

Comics of the Week: DC's RetroActive 1970s. In a nice addition to throwback summer comics (think DC's Wednesday's Comics from two years ago, a gorgeous piece of neo-nostalgia), the company is putting out a series of one-shots with a particular decade as a theme. Along with the above-the-title tagline, "RetroActive," DC included the logo of said decade (70s, 80s, and 90s) as well as the then-logo of the title character. This week was the 1970s, and we got stories about the Flash, Batman, and Wonder Woman, complete in her white mod suit. Each book has a new story, written in the old style, and a reprinted story from the era. For all the sophistication of modern comic storytelling, there's just something fun about this old stuff.
Posted by Scott D. Parker at 1:00 AM