Dave White said, don’t lecture me, tell me what you love and why. Good advice.

I love the movies of John Sayles. I love his novels and short stories, too.

The first John Sayles movie I saw was Return of the Seacacus Seven at a film festival in Montreal in 1980. The IMDB describes it as the film that inspired The Big Chill, though “inspired” wasn’t the word used at the time.

But yes, both films are about college friends from the 60’s who get together for a reunion about ten years later. 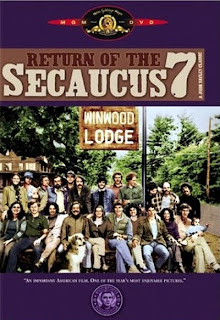 There are some odd differences, though. The characters in The Big Chill get together for a funeral – one of their friends has committed suicide. Depressing. Otherwise the characters are quite successful; a TV star, a guy who owns a chain of shoe stores, a writer for People magazine, doctors, lawyers – the usual Hollywood stuff. And they have problems. Deep, emotional, personal problems. And music, lots of Motown, lots of 60’s hits.

The reunion of the Seacacus Seven is an annual event (the single guy here, the singer-songwriter who isn’t a success at all complains about not ever getting a bed and he’s told, “You get a steady woman, you can kiss the linoleum goodbye,” – it’s a small house) “celebrating” the time they were all arrested in New Jersey on their way to a protest in Washington and spent the weekend in jail in Seacacus. Now they’re high school teachers and social workers and they work in community theatre and probably listen to NPR and donate enough to PBS to get those tote bags. None of them drive European sports cars. And they haven’t given up on their 60’s ideals, they’ve just matured and joined the “real world” as people do and adapted those ideals.

Besides the fact that in the Chill the people are all successful and have a lot of money (except the guy who killed himself and the guy who can’t have sex anymore, but I don’t think we’re supposed to make any connections there) one of the most striking differences between the two movies for me is the treatment of the “outsider.” In the Chill one of the women has married some rich guy and lives in the suburbs (so, of course, she’s miserable) and he’s not liked by the rest of the group. He doesn’t understand their “ideals” and why they’re upset they didn’t live up to them more, or something, and he goes home. Then the rest can really party.

In the Seacacus Seven one of the women brings a guy no one has ever met before and she’s worried they won’t like him. She’s gone to work for a senator and she’s worried that her boyfriend’s more “conservative” views (I put that in quotes because I think today the guy would be called a Marxist ;) will alienate her old friends.

But they’re her old friends and they love her and they accept the new guy and joke around with him and chide him about his views but they listen to what he has to say and the only thing that really matters to them is that he loves their friend and she’ll be happy with him.

Oh what a naive days they were, ha ha.

But as this is a blog about crime fiction, the John Sayles movie I wanted to talk about was City of Hope. Many of John Sayles’ movies have crime – or really corruption – as a central theme and in many ways City of Hope, released in 1991, is the precursor to The Wire, a story of the decay of the American city, the alienation of the underclass and the complicated and corrupt politics that infect everything.

And, like I was talking about last week, it’s not so much about the lone hero as it is about how people work in groups and form communities.

Here, Greg Smith explains it all better than I can (a little too academic, maybe, but still). I’ll just quote a little: 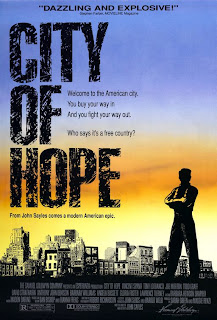 More than any other contemporary American director (with the possible exception of Robert Altman), John Sayles consistently experiments with making films about groups.The maker of “Return of the Secaucus Seven,” “Matewan,” “Eight Men Out,” “Lone Star,” and “Sunshine State” explores how to tell stories where heroes and villains are deeply rooted in their communities, not isolated from them. For Sayles, community is not just a backdrop for action; it is the stuff of everyday drama and everyday politics.

Sayles also attempts an even more difficult juggling act: telling a story with multiple protagonists, each one crucial to the narrative’s completion. In the commercial cinema (a medium whose structures are geared around telling stories about individuals), an auteur must necessarily rethink and reform basic narrative principles in order to deal with the intersecting desires of multiple protagonists.To do so may also require reinventing the visual strategies of storytelling, as Sayles does in perhaps his most narratively complicated film, “City of Hope,” a film with over 50 speaking parts and dozens of key players. “City of Hope” creates an urban environment in which people with only passing familiarity with each other may have profound effects on each other’s lives.

Smith also compares Seacacus Seven and The Big Chill and goes on to compare City of Hope to another Lawrence Kasdan film, Grand Canyon, pointing out, “Both films (each released in 1991) deal with the fragility of human connections, given the declining state of race relations in American cities, and both follow a number of characters (Grand Canyon has six prominent ones) who accidentally bump into each other. But Grand Canyon is centered around Mack (Kevin Kline), the figure whose missteps provide an (assumedly) white middle class audience with an entree into the darker urban environment.”

All this talk of individuals and community isn’t something we often hear coming out of Hollywood or even out of much crime fiction. Maybe it’s an American thing. I saw an article this week called, “We're #1 -- Ten Depressing Ways America Is Exceptional,” and it is a little depressing but for those of us outside of America trying to figure out America can often become an obsession.

The part that struck me was, “When Harris pollsters asked US citizens aged 18 and older what it means to be an American the answers surprised no one. Nearly 60 percent used the word freedom. The second most common word was patriotism. Only 4 percent mentioned the word community.”

So that might explain why things like The Wire, and the the films of John Sayles may not be as popular in America as they seem to be outside of America.

Okay, so this turned into more of a lecture than I wanted, and certainly more than Dave wanted.

Tell me what you love – the films of John Sayles.

And why – gotta be that exploration of community, where heroes and villains are deeply rooted in their communities, not isolated from them.

City of Hope is available from Netflix and iTunes and there are probably DVD copies hanging around and I think I have an old VHS copy if anyone wants that. Worth seeing.

I couldn’t find the trailer for City of Hope online, so here’s a clip of John Sayles talking about creating character details and then paring them away:

Email ThisBlogThis!Share to TwitterShare to FacebookShare to Pinterest
Labels: city of hope, john sayles, return of the seacacus seven

The only Sayles film I've seen is EIGHT MEN OUT, which I've watched several times. He shows the disadvantages of community there, as once the fix is in, most of the players consider backing out at same point, but the group holds them in. Also the saddest part of the story, Buck Weaver getting the same penalty as the rest for "guilty knowledge." He played his ass off and never took a dime, but wouldn't turn on his friends and went down with them.

I'm add CITY OF HOPE to the NetFlix queue.

Sayles is a great one. City of Hope is fantastic, I saw it back in '91 and it still influences me. The cops, the mechanics, the kids. Evil is rare, most people want to get by... evil happens sometimes when you get in their way.
He's a Jersey native, and City of Hope is one of the best movies about the endemic corruption of our state, especially in Jersey City and Newark.

Tommy, I think City of Hope was the first in Sayle's loose "America series." A couple of the bios I've seen say things like, "Sayle's has visited all 50 states and all 10 Canadian provinces."

And then he makes the foreign movies, Men With Guns and Casa de los Babys. His new movie, Amigo is about the American-Phillipines war a hundred years ago.

Someday I will watch this WIRE that all you people talk about.

The first John Sayles' movie that I ever saw was Matewan. City of Hope is still the most perfect melding of story, structure and direction that I've ever seen.

I like his movies a lot. Lone Star, Passionfish, Susnhine State, Matewan Se-7, Eight Men Out, City of Hope. He can sometimes be too didactic. But not often. We need ten more of him.

Why do you think that Smith guy is a bit academic? Just because he writes things like "an auteur must necessarily rethink and reform basic narrative principles" and "To do so may also require reinventing the visual strategies of storytelling"?

You say that Return of the Secaucus Seven gave is The Wire? Sounds like The Big Chill paved the way for Sex and the City.

John Sayles is coming to Philadelphia to read next week. Think I should call in sick from work?
======================
Detectives Beyond Borders
"Because Murder Is More Fun Away From Home"
http://www.detectivesbeyondborders.blogspot.com/

Yes, Peter, I think it would be worth it to miss work and hear Sayles.

None of his novels or short stories could be called Detectives Beyond Borders but Los Gusanos has a Cuban connection and it's a really good book.

It is no exaggeration to say that I've been meaning to read Jerzy Kosinski Steps for decades. Somehow, though, I've never gotten ar...