The British Are Coming

By Jay Stringer
It's almost time for you to get your hands on this years edition of The Mammoth Book Of Best British Crime. My initial disappointment at the books lack of an actual Mammoth was soon washed away when I saw the list of contributors. Who needs the come back of a long extinct prehistoric creature when you can sit and read all that crime goodness? 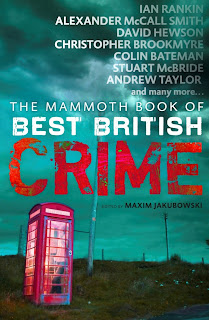 There are stories in here from Ian Rankin, Christopher Brookmyre, Stuart MacBride, Declan Burke, Ray Banks and the tartan ninja himself, Allan Guthrie. And that's just the start. Reading the full list of writers involved shows the real depth of talent in crime writing right now, including such friends of DSD as Nigel Bird and Paul D. Brazil. And they even let me in.
The details I have right now are for the British edition, from the folks at Robinson Publishing, but I'll have details soon of the American release. Lucky Limeys can get our hands on it in April, and it'll make it's way over to the states sometime in May.
Here's the official bit;
This is the must-have annual anthology for every crime fiction fan - the year's top new British short stories selected by leading crime critic Maxim Jakubowski. This great annual covers the full range of mystery fiction, from noir and hardboiled crime to ingenious puzzles and amateur sleuthing. It is packed with top names such as: Ian Rankin (including a new Rebus), Alexander McCall Smith, David Hewson, Christopher Brookmyre, Simon Kernick, A.L. Kennedy, Louise Walsh, Kate Atkinson, Colin Bateman, Stuart McBride and Andrew Taylor.
The full list of contributors is as follows: Sheila Quigley, Nigel Bird, Jay Stringer, Paul D. Brazill, Adrian Magson, Colin Bateman, Gerard Brennan, Matthew J. Elliott, Andrew Taylor, Lin Anderson, Christopher Brookmyre, Ray Banks, Declan Burke, Liza Cody, Simon Kernick, Stuart MacBride, Allan Guthrie, Ian Rankin (two stories, including a new Rebus), Nick Quantrill, Edward Marston, Nicholas Royle, Zoe Sharp, Robert Barnard, Simon Brett, Peter Lovesey, A.L. Kennedy, Roz Southey, Phil Lovesey, David Hewson, Amy Myers, Marilyn Todd, Peter Turnbull, Keith McCarthy, Paul Johnston, Alexander McCall Smith, Stephen Booth, Denise Mina, Mick Herron, Kate Atkinson and Louise Welsh.
And it's made possible every year by the hard work of Maxim Jakubowski, writer, editor, bookseller and all-round doyen. Maxim's shop, Murder One, used to be one of my favourite bookshops, and a must-visit whenever I was in London. The store lives on here on ye olde worlde wide webbe.
So, on your marks, get set, PRE-ORDER.
And while you're at it, why not buy yourselves a second copy of TERMINAL DAMAGE, and then, just incase it gets lonely, pick up DISCOUNT NOIR.
Posted by Jay Stringer at 3:00 AM

This collection looks like a MUST have; congrats to all the writers.

The book looks terrific as does the list of authors. My congrats go to all the authors, especially the Brits; can't wait to get my grubby paws on it.

Planning to move to the Brittains so I can order. Sounds great.

Wow what a roster of talent.