Entire Precinct Made Up of Loose Cannons 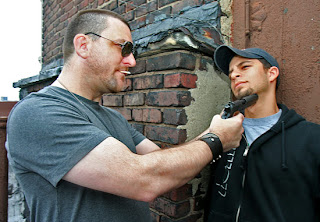 The police officers have been subjected to scathing public criticism over the years for their tendency to play by their own rules, which include refusing to obtain warrants, beating up junkies to extract information, and hurling corrupt city officials through plate-glass windows on more than 60 occasions.

Yes, of course, it's from The Onion.

But it got me thinking how the myth of the “loose cannon,” the “lone wolf,” the “break all the rules to get results hero,” is still such a staple of crime fiction.

And how there aren’t any in my books.

If there’s a common theme in my writing it’s about how we organize ourselves into groups, something that’s constantly changing, I think.

So, my writing tends to be about groups of characters – the police work as a group against the criminals who are organized into groups. Sure, there are lots of individuals (too many, according to some reviewers) but what interests me is how they fit into groups – communities.

Of course, this makes the whole “hero’s journey” thing a little problematic but I find that whole concept a little outdated anyway.

Maybe it’s because I’m not American and I live in the frozen north where we have to huddle together for warmth, but that whole, “rugged individual” thing never rang true for me. Even the old westerns with their stories of lone heroes often had an undercurrent of the pioneers “pulling together” to help one another.

Now we’re starting to see the teamwork inherent in police work show up in TV shows, everything from The Wire to CSI to Criminal Minds. Even a show like Castle has been using the cops more as a team to solve crimes.

But mystery novels still seem to be dominated by lone heroes.

So, what are some of your favourite mystery, crime, noir, whatever novels that are more of an ensemble instead of a lone hero?
Posted by John McFetridge at 3:00 AM

Ed McBain's 87th Precinct set the bar high for ensembles. Apart from the 8-7 you're right. There aren't a lot.

I wonder if this could be, at least in part, for the same reason you get so much grief over the size of your casts. Agents and publishers don;t believe the audience wants its rooting interest fragmented. They believe the reader wants a person to identify with, not a group.

I can't really say I've read much along those lines. Sure there have been with ensemble casts, but in every case that I can remember of what I've read there was always an individual driving the story.

I just finished reading Brubaker/Rucka's Gotham Central, a comic book series that focuses on the members of the GCPD. I have dubbed them "the 87th Pct. in Gotham." They work as a team most of the time. I really grew to like that aspect of their stories.

You mentioned "Castle" but I'll also mention another favorite of mine on TV: CSI: Miami (and the other CSIs, too). They all work together even if Horatio Caine is the lead.

I have to admit, I haven't read any of the 87th Precinct books, but I've read a lot of Ed McBain's short stories and they're terrific. I wonder why he seems to have been more of an influence on TV shows like Hill Street Blues and NYPD Blue than on novelists?

And I wonder why it's the TV shows today that have btranched out into the multiple-character storylines more than novels?

I think you;re right, Dana, that agents and publishers want a character for readers to identify with (though I've also been advised to make my books "easier" to follow) but I wonder if it has anything to do with the act of reader being different than the act of watching a TV show or a movie? Certainly movie-going used to be a more communal activity (as did watching TV) but now watching TV and movies is often as solitary an activity as reading a book and reading books has become more communal with the ease of online discussions and book clubs.

But I have a feeling that if David Simon had gone to a publisher and pitched 5 books about Baltimore with one about drug dealers, one about dock workers and one school teachers and how they were all linked by the police no one would have bought the concept.

Reminds me of the film SO I MARRIED AN AXE MURDERER, where Anthony Lapaglia's cop is upset because his boss never shouts at him or threatens to suspend him.

I thought Dana Haynes' Crashers had a pretty good team of people working together.

"Of course, this makes the whole “hero’s journey” thing a little problematic but I find that whole concept a little outdated anyway." It's not problematic at all - you just have to get your head around it. Suggest http://www.clickok.co.uk/index4.html