Yesterday, Joelle Charbonneau took a look at the books that pass through the gates of the publishing industry versus those that go straight to the reader. Her insightful post is here.

Joelle, whose delightful debut novel was published by Minotaur (a Macmillan imprint), was using the recent Amazon pedophile ebook horror as a jumping-off point. And, speaking of Joelle's publisher, the Weddles picked up a number of Macmillan/Minotaur titles at the bookfair this weekend. Duane Swierczynski. Ken Bruen. Ian Rankin. How cool is that? I love these folks. Heck, I think the only book I got that wasn't from Minotaur was a Steven Brust novel on Tor. Hooray for Minotaur.

Joelle's argument about having editors and publishers help select what goes to market is a solid argument. I'm glad Big Publishing decides what goes to market, how many are printed, and how they are distributed. If not for that, I wouldn't have been able to get 32 books for about $30 yesterday. All hail the marketplace.

I picked up a handful of Scott Wolven books at a bookfair this year. Some copies of John McFetridge's Dirty Sweet, too.  And some Jim Thompson. And a ton of those fancy re-issues of Nabokov that Vintage did. You know, the ones with the expensive, pretty covers. 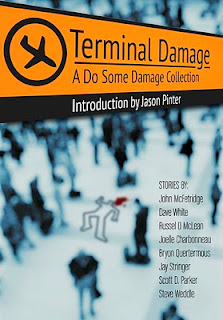 And if I'd wanted to build a bridge from here to Terabithia with copies of Franzen's new literary masterpiece, I could have done so at the bookfair for right around nine dollars.

Having so many books available from big publishers is great.

I'm not here to bury Caesar; I'm here to say that Brutus guy has some cool ideas, too.

Check out Chris F. Holm's fantastic short story collection, 8 Pounds. Chris took his award-winning and published stories, edited them for the Kindle format, got a gorgeous cover from John Hornor Jacobs, and started selling that ebook on Amazon for 99 cents. The book contains the Spinetingler-Award-winning "Seven Days of Rain," Derringer-Award finalist "The Big Score," and "The World Behind," which originally appeared in Ellery Queen's Mystery Magazine. You can't do that with big publishers. Why? Because Traditional Publishing tells us that short story collections don't sell. Except, you know, they do. Because I buy them when available -- as 99 cent downloads. And you buy them. Chris has been selling the Kindle collection pretty well as word of mouth keeps them moving. And he doesn't have to pay to print 10,000. Or have them stored in a warehouse. Or have them shipped to a bookfair in nine months to sell for a dollar each.

How about Discount Noir, a collection Patti Abbott and I put together with stories from more than 40 fantastic authors? Flash pieces about blood and murder in a big discount store. No big publisher wants that. A book of 45,000 words? That's tough to move off the shelves. Unless there are no shelves.

Traditional publishing works great for many things. I was in a bookstore last week just walking around, not planning to buy anything, and picked up Daniel Woodrell's Tomato Red. Without the physical store, I probably never would have run across the copy. But, dang, what a good book. Hooray for Busted Flush Press. And hooray for traditional publishing

Ink on paper works great. That's one reason we started Needle: A Magazine of Noir. Because the physical book is still a wonderful thing. And the big houses and the independent publishers know how to make this work.

But, you know, once we decided on the national level that all our citizens needed to be able to read and write, we pretty much opened things up for self-publishing. Everyone writes.

Just ask Charles Bukowski:
"and-
he WRITES TOO.
POETRY, of
course. everybody
writes
poetry.
he has plenty of time and a
postoffice box in town
and he drives there 3 or 4 times a day
looking and hoping for accepted
poems."

Everybody writes and everyone can put out ebooks. Fine. Everyone can make pizza, too. Doesn't mean I wouldn't rather have pizza from Vinny's than that crappy canned-sauce spread on canned-dough crap you and your kids made for "together time" last weekend.

The point is this -- Having ebooks as an option seems pretty cool to me, especially for those collections that traditional publishing doesn't want to handle. This allows us a Chris F. Holm collection. Discount Noir.  A really cool sperm-bank-thieving collection from our own Byron Quertermous. And John McFetridge's own excellent collection of stories here. (pdf download)

Are ebooks the solution? Heck, I'm not sure what the problem is. Ebooks aren't the reason all those people got fired when Dan Brown's new book was late. The problem there was that publishing is set up for the next bestseller, not the mid-list authors. This isn't news to anyone. This is How It Works, you know? If I'm the next bestseller, that's how the damn thing should work.

But the other way it works now is this -- if Chris F. Holm wants to collect his stories, now he has a way. He can do that himself, relying on the quality of the work, the prior periodical publication of those stories, and word of mouth. And that works out just fine.

Oh, one more thing. The Do Some Damage collection of airport stories is available this week -- for Kindle over at Amazon. The book is called TERMINAL DAMAGE and you might be able to find it here. I uploaded this ebook on Sunday and it will take until Monday to become available. Which seems like a long time, you know, in the ebook world.
Posted by Steve Weddle at 3:00 AM

Traditional publishing by definition despises the experimental, the audacious, and the inconventional. They are the Higher "Authority," which means they are the "author"-ities of the dominant narrative. What they cannot lock out, they must censor. Censor? How about "filter"? And then let us diss what slips through. Gate keepers, temple dogs, bah humbug. They want "something new but very familiar." Sometime the view is better out there on a limb.

I would like to point out, though, that "traditional publishing" goes far beyond the five or six multi-nationals chasing bestsellers and includes plenty of small presses devoted to the experimental.

But I get what you mean, Fred.

Who did you get to write it for you?

I agree with you that I like both options. I don't buy that one form is going to completely take over the old form. Estimates are that e-books might get up to 25% of the total marketplace. That's huge and noticiable and such, but there's still the matter of the 75% that isn't e-books.

I think the biggets thing I've pulled from this whole argument is that books are too damned expensive. People aren't buying e-books because they have a huge craving to read on electronic screen, they're buying e-books because they're cheaper and more available for the most part. Make paper books cheaper and more available and the whole thing changes.

I don't think e-books will spell the end of print publishing anymore than television led to the end of movies or video led to the end of television. It simply creates another medium through which content can be delivered to consumers (if one may be so bold as to adopt such vulgar language).

That being said, what is the advantage of a printed book over an e-book?

Sure, books are nice; I was in the printing business for a long time before the Internet came along, and I like ink on paper as much as the next person.

That being said, I own lots of paper books that don't do anything but take up space now. Computer and software manuals, paperback books that I'm never going to read again, magazines -- basically printed ephemera that just takes up space and is difficult to dispose of because it has no real value but at the same time I can never bring myself to throw away a book.

So, there's a lot of stuff that would benefit me to get in electronic form rather than print.

There's the cost argument, too. E-books may be cheaper than print books to produce, but the devices on which you have to view them are relatively expensive, several hundred dollars at least at the moment. Even a thick hardback novel only goes for about $25-$30, and paperbacks go from about $7 to $15. Although e-books could be a lot less expensive than that, they aren't, mostly because I think publishers don't want to price e-books too low and risk cutting their print publications' throats.

The thing is that the electronics are going to get cheaper. Within five years, we're going to see basically disposable e-book readers for $10. Books will come with their own e-book readers, which you can then use to load other books and publications for as long as the thing lasts or until you decide to get another one.

Once that point hits, what will prop up the print book trade beyond "some people like paper"?

Honestly? Nothing. By the time kids just learning to read now grow up, I imagine that bookstores as we know them will no longer exist. Sure, there may be things called bookstores, just as there are still record stores, and you can even buy vinyl LPs in some of them, but they'll be a niche market. Bookstores will sell cheap e-readers preloaded with bestsellers, and maybe have some sort of print-on-demand machine for people who absolutely have to have something on paper.

Publishers as we know them today will either adapt to the new environment or they will die out, like livery stables once automobiles hit the streets. There will still be publishers, who will have editors and who will promote books and do all the things publishers do now. It's just that, eventually, there won't be any paper involved.

I'm guessing, of course. We'll just have to see how it goes.

Wow. Thanks for the many, many mentions.

So I guess by putting an e-book out there, I've kind of weighed in already on the whole e-book debate, but as a consumer of both print and e-books, I find that -- for me, at least -- the old school and new are more complimentary than competitive. I scarcely consider the format these days when it comes to picking my next read, which (coming from this technological curmudgeon) is a compliment to my e-reader (Kindle, if you're curious, and I like it fine, but it's hardly the instant necessity of, say, an iPod.)

But I will say this: my collection would've made no damn business sense as a paper release. And I suspect the same goes for a lot of other small releases I've plunked down good money to download, not to mention enjoyed the hell out of. Stuff like DISCOUNT NOIR. And for that alone, e-books are all right by me.

Now if you'll excuse me, I've got to see if TERMINAL DAMAGE is up yet...

Right. Looks as if we all agree that ebooks are a good option.

Now that the Nook/Kindle folks are talking about the ability to "loan" a book, I think one of the complaints against ebooks has been taken away.