I'm far too big a fan of Elmore Leonard to write anything close to a review. I've liked all his books, even the ones that have received the most mixed reviews like Mr. Paradise and Up In Honey's Room.

In the case of Mr. Paradise the lukewarm reviews usually talk about the "thin" plot and complain there isn't enough backstory in the characters. I don't agree, but that may just be taste.

What I find really odd is that very few reviews of Elmore Leonard's recent novels have much to say about what he's doing with the language. It may be a case of genre, people coming to crime novels with a certain set of expectations and the fact the author has different priorities creates this gap.

But make no mistake, Elmore Leonard is pushing the bounds of langage in the novel as much as any post-modern literary novelist.

(or maybe this is just a convesation we have more often in Canada because so many of our novelists started out as poets, I don't know)

And he's also doing some really interesting things with the idea of storytelling itself. His novels are always in the voices of the charactrs and more and more lately the characters are telling other characters what has happened rather than being in the middle of the action.

I remember in the novel Be Cool, Chili Palmer was on his way to confront some Russian mobsters but then it didn't happen. Or rather, it wasn't described as it happened, we find out what happened later when Chili is in bed with studio exec, Elaine, and he tells her. Of course, we get his version of events, but we also see how it affectd him and how his telling of it affects her. And him. And how it affets their relationship.

(in fact, Be Cool is as much about storytelling as it is about its plot - Chili Palmer saying how he's "plotting" as he goes and putting the story together, and the book is a sequel in which the story is about a guy making a sequel to the film the first book was turned into and, well, you could write a literary dissertation about this stuff - if you wanted to suck all the fun out of it ;)

Well, that kind of thing started to happen more and more in Elmore Leonard novels until we get to Djibouti and almost all the "action" in the story takes place in a hotel suite where a documentary filmmaker and her assistant are watching the film they've shot of Somali pirates, a Texan billionaire on his yacht with his model girlfriend, an Arab guy from London who claims to be negotiating for the return of the ships the pirates have siezed, a guy who may be in al Queda, and, well, lots of other people.

Sure, there are some scenes with these characters described as they happen.

But Elmore Leonard has made some very interesting choices. Why are some scenes described as they happen and others in retrospect, looking at them on the computer in the hotel room?

The reviews (admittedly mostly amateur Amazon reviews) that don't like this don't seem to have given much thought to why the story is being told this way.

Another thing that's interesting here is the use of theme. In some interviews Elmore Leonard has said that he doesn't think about themes for his books and he didn't even know what they were until Scott Frank wrote the screenplay adaptations and told him.

Now that's just funny. That's a guy daring people to call him out. And they don't. Did we really need to have crabby Martin Amis point out to us that Elmore Leonard is really doing something special?

So now, in Djibouti, he has the fimmmaker, Dara Barr, and her assitant (six foot six, seventy-two year old black guy) Xavier LeBo watching the footage and putting the story of the documentary togther and Xavier actually says at one point, "That's your theme coming out out there."

I'm not much of a fan of the "beautiful language" style of literary novel because I'm old and from the "truth is beauty" school and I don't find much truth in that overdone "beautiful" language, but I find plenty of truth in Elmore Leonard's language.

And one more thing. Djibouti is the first book I bought on my new iPad. 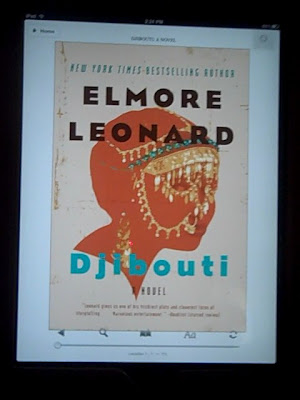 I preordered it using the Kindle App from Amazon and when I woke up on Tuesday morning, the day the book was released, there it was waiting for me.

The iPad isn't e-ink, it's a backlit screen so if I ever get two hours to sit and read uninterrupted I'll get some eye strain. By the time that happens, though, I'll probably be making the font so big it'll be okay. I'll fall asleep long before the eye strain sets in.
Posted by John McFetridge at 12:49 AM

I have read a few of his books here and there, but always felt he wrote exclusively to a male audience. But he so impressed me last year when I heard him in person that I vowed to read more. Maybe this new one will be it.

Or maybe the books just aren't for you, Patti.

You're probably right that the books are speaking to a male audience - an audience of one, really, as like most of us I think Elmore Leonad is writing the book he wants to read. In his case, more than most I think, he's doing exactly that with no compromise to market or publisher's input.

Often when taking about gender people look at the characters - you know things like, "the female characters aren't as strong as the male," and that's fine, but sometimes I find that people are looking for the men and women to be the same and that hasn't been my experience in the world. As strong, yes, but not in the same way. Just like men and women aren't always flawed in the same way.

But this book may not be the best place to start. Have you read Freaky Deaky? It's Detroit in the 80's but the characters look back to the 60's.

And one thing that doesn't get mentioned about Elmore Leonard characters very much is that as he's aged, so have his characters. How many novels these days are about characters in their 60's, 70's and even 80's (Mr. Paradise).

Maybe it's just me, but I liked MR. PARADISE quite a bit. ROAD DOGS was panned, but I liked it, though it's not Leonard's best. Reading Leonard is a Zen experience for me: it's not the destination, but the journey I'm there for.

I'e read most of his novels and would gradly read all but a few again. I still think HOMBRE might be his best.

I'm a big Mr. Paradise fan ... and Up in Honey's Room ... but I'm also a Bills fan (we didn't lose last week!). He's a master for a reason. Sometimes his introspection can become a bit much but with Leonard it is always a pleasure Riding the Rap (sometimes I'm so clever).

I don't think that Elmore Leonard actually wrote "Djibouti." I find it ludicrous that Xavier and Dara are telling each other what happened on the boat when they were both there. And the "I remember ..." stuff is forcec.