A Corner of a Room of One's Own

Since high school I've written stories. Back then I had a desk in my bedroom. And a record player. I used to listen to Grand Funk and Alice Cooper and Deep Purple and David Bowie and write stories. For a couple years when I was a kid we had some political activism in Quebec. A few bombs were exploded in Montreal, mostly in mailboxes because apparently they represented the federal government, and once in an army recruiting office that killed the security guard (a retired military guy in his late sixties). And we had a lot of bomb threats, lots of times we had to clear out of the mall or the arena were I played hockey or school (that was always okay ;) because a bomb threat was called in.

And we had a couple of political kidnappings. In October 1970 (when I was 11) a British diplomat, James Cross, was abducted from his home in Westmount (on the island of Montreal). A few days later, Quebecois politician Pierre LaPorte was kidnapped from in front of his house in St. Lambert, the next town over from where I grew up in Greenfield Park on the south shore.

Cross was released in early December (the kidnappers got safe passage to Cuba) but only a week after his abduction Pierre LaPorte was killed and his body was found in the trunk of a car a few miles from where I was living (his kidnappers, a different cell of the FLQ, were caught a while later and all served prison time). At that time I had a job delivering the morning newspaper and, of course, it was filled everyday with stories about the kidnappings - The October Crisis.

So, a few years later when I started trying to write stories at the desk in my room they were mostly James Bond-style action stuff, very heroic rescue scenes and explosions.

I never dared show anyone any of those stories.

But I did get used to the idea of writing off in a corner of the room. Over the years in some places I've lived I've had an "office," a room with a desk dedicated to my writing. Sometimes there was a corkboard covered with index cards (and for a while covered with rejection letters back in the days when we actually got paper letters in the mail).

When my wife and I bought this house and had kids I became a stay-at-home-Dad and when the kids would nap I'd sit at the dining room table and write. 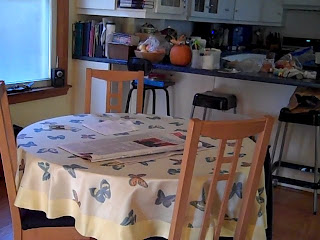 This is where I wrote Dirty Sweet and Everybody Knows This Is Nowhere.

Then, a little while ago we renovated the house and I got part of the front porch as an "office." 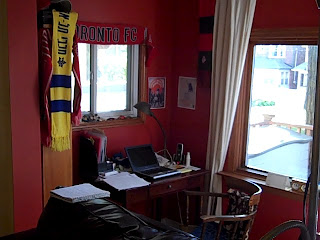 A few years ago for Christmas my mother sent my sons some toys that are little bikers (!?!?). I keep them on the windowsill over my desk and I've named them after the characters in my books. There's JT and Nugs and Danny Mac and Gayle and Sherry: 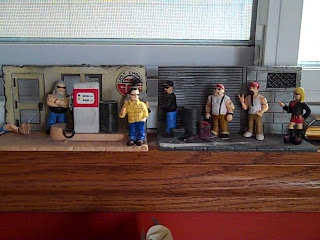 At the moment I'm working on a book (which I hope will be out by this time next year) called Tumblin' Dice about a rock band from the late 70's who reform and play the casino circuit. The band's old manager, Frank, is now the entertainment director of the casino just north of Toronto (which I'm calling the Huron Woods Casino) and getting involved with the bikers in money laundering and drug sales and prostitution. If they can get rid of the mobsters who are already there.

And one of the band members, Ritchie, who still loves to play music, was twelve years old when the Toronto Rock'n'Roll Revival was staged in 1969 and his older sister snuck him in. What Ritchie remembers the most about the concert was the way all day long, while guys like Jerry Lee Lewis, Little Richard and Chuck Berry were on stage, Jim Morrison stood in the wings and studied everything they did. Ritchie tells Angie how when The Doors went onstage Morrison acted like he didn't care at all about putting on a performance the way the old school guys did, but Ritchie noticed he used all kinds of moves he'd seen them use.

So, I found a couple of posters for the real concert online and printed them and I have them on the wall for inspiration: 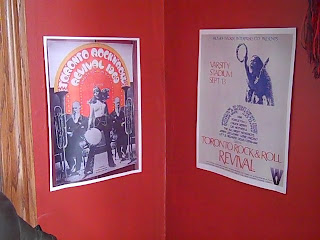 When I signed my first book contract I was very excited and decided to treat myself. I figured that instead of going out to a nice restaurant or something like that, I wanted to get something that would remind me everyday that thirty years of working at writing had paid off (and it had to be something inexpensive because my advance was in the "low four figures"). I had a lot of weird ideas but I finally decided on a really good radio so I could listen to Grand Funk and Alice Cooper and Deep Purple and David Bowie. I bought this Tivoli desktop: 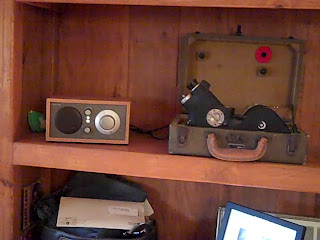 You can't see it in this picture, but there's another desktop speaker and a sub-woofer on the floor. The radio is fantastic.

Next to the radio in that picture is a sextant that my father actually used in the navy in World War Two to cross the north Atlantic.
Posted by John McFetridge at 12:34 AM

As a stay-at-home dad with hundreds of kids running round the place and no room to write, this piece was inspirational, John. Inspirational because I have a front porch, at as of today, stacked up with bikes and exercise equipment and shoes and shit. A front porch which I have now very much got my eye on . . .

A space of your own is so important and one that I would love; a desk to write at, to litter, to have some shelves and a pinboard.....
Ah well! My husband has a garage so why can't I claim a little space for myself....so maybe I just will - thanks for the push :)

I like the idea of surrounding yourself with "things" from your novels. Or the world of your novels. The posters seem really cool, like they put you in the right mindset.

Kinda like listening to the same artist while you write. You pop in the earbuds and you're right back to the writing world. Or, you know, you fire up the old reel-to-reel.

Grand Funk!! \m/ Represent!! I grew up in Michigan--Upper Michigan, so more like Canada than Lower Michigan (those sissies with indoor plumbing)--and man does that take me back.

I have a desk in a corner of the living room. Or rather, a pile of stuff in the corner. Most of my writing gets done at coffee shops, where there are people and stuff, but not my people and not my stuff, so I can actually think.

Ha, Ian, hundreds of kids, I know the feeling. The good news is it passes, the kids get bolder and you can climb out from under the rubble a little.

Don't laugh, Weddle, I had a reel to reel. How else could you listen to an entire Pink Floyd bootleg?

McDroll, I admire anyone who can work done in cafes and that certainly beats the garage.

Indoor plumbing, that's funny, such wimps. Not like Mark, Don and Mel.

Oh, and I picked up the book "Creem" a collection of articles from the old magazine, that was from Michigan, too, wasn't it?

"Older." That's supposed to say the kids get older, not bolder.

Grand Funk ... the first band I played drums with did a good cover of Closer to Home ... except nobody could sing.

Charlie that's funny, some friends of mine in high school played the same song and also couldn't find anyone to sing.

I'm trying to use, "Stop Lookin' Back" as an anthem these days, but up here in the New York State Buffalo Bills territory I can't help but think Perry Fewel is looking pretty good right now.

Your house looks like a place where it would be nice to live. I need a good radio. Maybe that's the one.
And I want those bikers. The real ones--no, I'm only kidding.

Fewell'd be fine right about now, although I doubt he'd want it anymore.