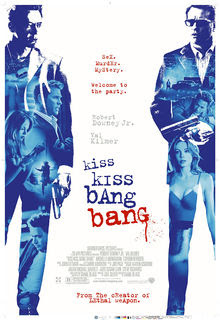 I recently watched Kiss Kiss Bang Bang again mainly because I wanted to watch a movie we owned and that the wife would also watch. But I also wanted to see it again because it gets referenced a lot when talking about modern noir on film. So it was with this in mind that I watched it, looking for those things that make it noir.

That is, I looked for those noir elements only when I wasn’t laughing my face off. I mean, this movie is flat-out hilarious. It makes you want to have a half dozen movies with Robert Downey and Val Kilmer just riffing off the original script. I loved the constant grammatical references throughout the film. It brought a tongue-in-cheek literary sophistication to a paperback-original-type movie. Honestly, however, some of the plot points important for the average viewer (or first-time viewer) was buried in dialogue so quick that it’s easily missed. That’s a downside to the film

As far as the noir elements, they’re all there: private detective, Hollywood, hot chicks that may or may not be who they seem, old loves, complicated mysteries, duplicity, nighttime locales complete with shadows, men with guns. You can’t help but wonder how many Gold Medal paperbacks the director, Shane Black, read back in the day because he distills all the elements down into a wonderful homage.

But it’s not just noir elements that Black uses. KKBB is a buddy film. Black, the creator of the Lethal Weapon series, still has the knack of making you laugh even when you know the character types he presents. I mean, Downey and Kilmer are not Mel Gibson and Danny Glover but the archetypes are there: uninitiated rookie and seasoned veteran. You know it going into the movie but there’s still enough of the "new" in KKBB that you go along for the ride and laugh anew at recycled jokes. It’s just a fun film.

KKBB is one of those films that breaks down the fourth wall, the wall between the movie’s participants and the viewers. Downey does the voiceovers and, at the beginning, actually ‘stops’ the film and takes us back to some crucial point. He’s self-aware but that’s nothing new in crime fiction. I mean, honestly, every first-person POV book is, in effect, self-aware. The main character, the “I” in the story, is telling you the story. The “I” is telling you what he wants you to know and when. And, of course, the "I" has to live through the book because he is, uh, telling you the story.

Speaking of crime fiction, this movie is a loose and updated adaptation of Brett Halliday’s “Bodies are Where You Find Them,” one of Halliday’s Mike Shayne stories. I haven't read any of the Halliday books yet. Any particular one better than the others? Should I go ahead and start with the one Hard Case Crime published last month?

Kiss Kiss Bang Bang wears noir and hard-boiled fiction on its sleeve. It’s a loving tribute and an update and, most importantly, a funny, funny movie.

Any more like this y'all can recommend?
Posted by Scott D. Parker at 1:00 AM

I've never seen it but will be on the look for it now.

Never seen it either. Not sure why.

Great movie. I saw it for the first time last December (a few days before Christmas, no less) and loved it right away. I haven't read any of the Halliday stories, though. Most of the ones I've looked for are out of print.

David - You should enjoy it.

Patti - Because there's just so much good stuff out there to consume that other good stuff gets put by the wayside. Upside: the bad stuff is farther down the list.

StephenD - I'm keeping an eye open for some Halliday books whenever I got to antique stores. Figure I can't go wrong...