"Well, I'm standin' in line in the rain to see a movie starring Gregory Peck,
Yeah, but you know it's not the one that I had in mind.
He's got a new one out now, I don't even know what it's about
But I'll see him in anything so I'll stand in line."
-- Bob Dylan and Sam Shepard, "Brownsville Girl"

I’m kinda picky about what Bob Dylan bootlegs I like. I’m big fan of the talking blues boots from the late 50s and early 60s, when the title of nearly every song he did either started with “The Ballad of.” From “Talking Hugh Brown” to “The Ballad Of Donald White,” each song Dylan covered or wrote was a history lesson with humor, sympathy, and grit.

In the 70s the good stuff comes from the Rolling Thunder Revue, with great stories of cowboys and treasure hunters.

Once we get to the 80s, the INFIDELS album gives all kinds of good concert material. I’m not too keen on most of the stuff from the 90s, but the 2000s saw a great resurgence and some mammoth tours. 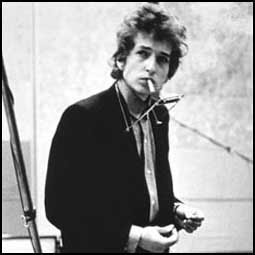 The boots I’m most fond of are those that take standard songs and give a new take on them – offering new lyrics for “Tangled Up in Blue” or new music for “Stuck Inside Mobile.” Give me something I’m used to, something I’m comfortable with, and twist it around a little. Not too much. I don’t want a pop version of “Leopard-Skin Pill-Box Hat” or a steel guitar version of “Sweetheart Like You.”

But I’m pretty much done with the Greatest Hits. I feel like I should apologize for this, but I really could go my whole life without ever again hearing “Times They Are A-Changin'” or “Blowin’ in the Wind.”

And that’s how I like the protagonists in my crime fiction.

I just finished Sean Chercover’s excellent BIG CITY BAD BLOOD. In that book, the “hero” is Ray Dudgeon. You’ve probably already read the book, so you know a little about Dudgeon. He’s a PI who drinks and smokes too much. He gets beaten up a few times. He listens to jazz. He loves his local town and whines about the GAP moving in. He has some demons in his past. He’s trying to do the best he can, but gets in over his head, basically because he follows his own code of ethics. Oh, and he’s having some trouble with his woman.

Even if you haven’t read the book, much of that will sound familiar. Heck, all of it could be used to describe other protagonists in other crime books. And you know what? That’s cool by me. Know why? Because the particulars make the character, not the generalities.

Chercover could have taken a peg-legged boat captain chasing after a white whale and the story would be like nothing you’ve ever heard of. Dudgeon is his own man, inside the book and inside the realm of crime fiction.

When we pick up a book, we look for the familiar and the fresh. We want (Sorry. Am I being presumptuous? Should I switch to saying “I want” so and so? Or are you with me? OK. Fine.) I WANT a character I can identify with, someone I can root for. That usually means someone outside the system. I need someone with internal and external conflict. I need someone with a history he or she is fighting with. I need someone facing tough choices. I need there to be something at stake. I have many needs from the character and the conflict. I’m a needy reader. Fine, I can admit that. I like to read about tough guys and gals who get pushed around.

Laura Lippman’s Tess Monaghan is like Dudgeon – a former newspaper reporter turned PI. She has her own demons. She loves her Baltimore the way Dudgeon loves his Chicago. And the two couldn’t be more different.

Chercover, Lippman, and so many other great crime novelists work like painters. They take the blue of the main character’s love of music, the red of the hero’s short temper, the yellow of his or her fear of change, and they paint such detailed, complex works that you forget they’re using the same colors you’ve seen ever since you first saw a painting.

I’ve heard many writers who have big ideas – a cowboy on the run in a Bob Dylan song who gets pulled from the lyrics and finds himself in the middle of a murder investigation. Big ideas. Big, empty ideas. Like buying a big canvas and then not doing anything with it. Because it’s the detail work that gets us, the particulars.

Dudgeon does only what he does, what no one else would do. Yeah, a crime novelist can start out painting “Still Life with Fruit” or playing a version of “When I Paint My Masterpiece.” But it’s what the writer does with the particulars that matters, the tone, the shadows. And, for the crime writer, how the author deals with what comes out of those shadows.
--------------------

When you look for a new book to read, do you find yourself drawn to certain types of characters?

When you write a story, how do you make sure your characters exist on their own terms?

A good blog topic. Who would you stand in line to see? I have a feeling we've gone more from actors to directors.
I am attracted to characters who play their cards close to their chest. Ones who show their inner thoughts like a onion.

When I pick up a book I usually wonder, "Could this really happen?" And I don't mean as one of those one in a million, freak occurrances, I mean as a regular event that likely wouldn't even make the news.

And then I wonder if it could happen, does this writer have anything to say about it beyond the obvious?

The Dylan is a good place to start. He seems like such a nice guy, 'folksy,' singing about working on Maggie's farm, and laying across my big brass bed, but then he points out how you'd rather see me paralyzed, why don't you just come out once and scream it.

If you liked BIG CITY BAD BLOOD, you're going to love TRIGGER CITY.

I'm looking for a character I can empathize with. He can be damaged in some way, but not a freak show, and not in a gimmicky way, just to make him different. It's not what's in his (or her) past that interests me so much as how that might make him behave now. And his cat cannot talk to him. Nor can his brain tumor. (Swear to God, I once read a book where the hero had a brain tumor he named and carried on conversations with.)

I'm not sure I have a good answer for your second question. I have the character's traits in mind, and I think, "How would he respond if this happened?" but that's about as far as I take it. My main characters have well-defined codes is the best I can say, even if their "moral code" is somewhat amoral or based on convenience.

Maybe that's why I haven't sold yet.

Good post. The first time I heard Bob Dylan you played it (probably from your boom box on a casette tape.) Years ago Andy and I drove from Phoenix to Dallas overnight listening to Dylan, non-stop. A little burned out for awhile but I do love "Jokerman".

#2 You know I have no idea how to answer that one.

Dude, you flatter me beyond all reason. And I thank you.

Patti, Yeah, I like layers. Kinda why I hate finding out the clear-cut reason someone does something.

John, I've read your books with people lying in bed. I think yours are much different stories. Though, maybe not.

Dana, Looking forward to TRIGGER CITY. And as for the convenience thing, I'm reminded of a Dylan line (yeah, surprise) from "Brownsville Girl" : 'People don't always do what they believe in./ They just do what's most convenient, then repent.' I understand characters like that.

Mr. Chercover, Looking forward to TRIGGER CITY. Going to the bookstore this weekend for it. Now I have to track down the Ray short stories. Thanks for writing.