A former crime reporter, Lori Duffy Foster knows her way around a strong story.  She has invented one in her new book, Never Let Go, and she tells it with the swiftness and efficiency of a consummate professional.

The novel opens with a woman called Carla taking a bath and thinking about her baby with much anxiety.  When a voice comes through the room's walls asking her "What do you think you're doing?", we know something is seriously wrong and that she has an immediate reason for being so tense.  Over the first chapter, we learn that in the small town where they live -- in rural western New York State -- Carla and her six-month-old named Christopher have been kidnapped by Carla's best friend, Rachel.  Rachel is Carla's childhood friend, in fact, someone who spent many hours of their childhood in Carla's house.  Rachel has sold Christopher off to people as part of an illegal adoption and, obsessed with Carla's husband, as she has been since their high school years, though she's hidden this obsession for a long time, she plans to use Carla's absence as a means of replacing her in her husband's life.  She needs Carla alive, though, at least for the time being, to give her exact tips on her husband's likes and dislikes.  She needs specific details on things like how to kiss him, how to touch him, what to say to him, so that she's all but guaranteed to turn him on sexually. The husband, Nick, has no idea what happened to his wife and son other than that they were abducted -- he doesn't even know whether they are still alive -- and seducing a man in that state will take guile.  Of course, Nick has no clue that Rachel, always coming by the house ostensibly to keep him company and bring him food, is the one who took his wife and kid.  He doesn't know that Carla is a short drive away, locked in a soundproof basement Rachel devised beneath her house. Nick never was all that keen on Rachel, to be truthful, but in a time of such anguish, he could be vulnerable.  He could be open to the affections of someone who appears to be upset herself and who's pretending to be helpful in any way she can. 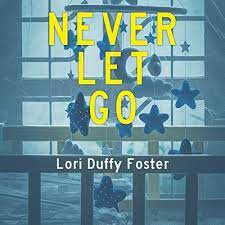 Scherezade had to tell stories to keep herself alive.  Carla finds herself in the horrible position of having to coach her abductor on how to excite her husband.  This is valuable information to Rachel, and without it, Carla might lose all worth to Rachel, become expendable. It's a situation that in the hands of the wrong writer could become melodramatic and far-fetched, but Foster makes it all plausible.  It's actually the kind of story you do sometimes come across, in all its craziness, in true crime shows on channels like Oxygen.  Except instead of the breathless and hyperbolic narrator, we get Foster's even and forward-moving narration, a seamless flow of ever-increasing suspense.  She knows exactly what she's doing, and through third-person narration, she's adept at getting into the thoughts and emotions of both Carla and Nick.  They are intelligent yet ordinary people caught up in a horrific situation, and their fear, rage, equivocations, and reversals of thought are captured with precision.  We care about these very relatable people suffering through about the worst situation any parents could suffer, and we want them to vanquish Rachel, a cunning and twisted foe, and get back their child.  And even if they do all that, will their marriage survive?  They love each other, but their marriage, like most marriages, had subtle fault lines before the crisis ensued.  After everything they have to go through, no matter how it turns out, positively or disastrous, will they be the same people as they were before, a couple who can just pick things up after the abduction and carry on?  And what about their son?  What about Christopher? If they get him back alive and in good health, will he even remember who they are?

Foster has a second plot interwoven with the double kidnapping plot, and this one involves a murder, the discovery of the remains of a teenage boy killed years ago. The town's police chief, Sawyer Hamill, investigates, and this thread of the novel is quite interesting in and of itself, with Sawyer poking around into the victim's past, the town's past.  The intercutting between the two plots is skillful, the respites from the kidnapping strand making you eager to get back to it, while at the same time, you want to find out what happened to the teenage kid.  He was a somewhat mysterious kid who seemed to be a misfit when he attended high school, but as Sawyer finds out, to his surprise, the victim may not have been a weirdo at all.  Things come to a head with Sawyer involved on both fronts, and both plots, I should say, have satisfying payoffs.

In Never Let Go, Lori Duffy Foster has written a book that one zips through feeling the most basic reading instinct one can have: you want to find out what happens next.  She combines a pure suspense tale with a murder mystery, and with an effortlessness that is admirable, she pulls the whole package off quite well.