I never met Robert B. Parker, but I owe him. I found the Spenser novels by chance — and coincidentally, the book was called Chance as well — when I was in my mid-20s. College was over, and I was drifting, with no real sense of who I was or wanted to be. I was nearly feral with my lack of either social graces or any sense of will that would break me out of the red-dirt road life I’d been raised in. Then Spenser and Hawk came into my life, chasing the daughter of a Boston crime lord who had run off with her ne’er-do-well husband. I was hooked instantly.

In the years since, I’ve read everything that Parker ever published, save for his doctoral dissertation. I hunted down the rare Three Weeks in Spring, read Early Autumn and A Savage Place and Looking for Rachel Wallace so many times that the covers wore off the the cheap paperbacks that were the only versions of the books that my local bookstore carried. I can still recite the opening line of A Godwulf Manuscript by heart — “The office of the university president looked like the front parlor of a Victorian whorehouse.” Those books sang to my heart in a way that very few other things have. In many ways, meeting Spenser and Hawk and Vinnie (and yes, even Susan), helped me see that a different life was possible. That I could be the man — the adult — that I wanted to be.

But I owe someone else, too.

Around the same time I found Parker, I discovered Donald Westlake (in all of his many names). I love the Dortmunder novels and the Sam Holt novels and the Mitch Tobin books. I have hunted high and low for the hundred-and-something books Westlake wrote during the course of his lifetime. From I Gave at the Office to Kahawa to Humans to What’s the Worst That Could Happen? I drank down every last Westlake novel that I could find, like a thirsty man plunging his head into cool, clear water that would save him.

One of Westlake’s alter egos, Richard Stark, wouldn’t save anybody. He wrote brutal, short noir novels that were, above all, about a workman — a sociopathic antihero named Parker — doing his work, which happened to be stealing. Parker was in a rough business, rougher and bleaker than Spenser’s. But I loved it anyway. The first line of Stark’s 2001 novel, Firebreak, features what I believe to be the most perfect first line in all of crime fiction: “When the phone rang, Parker was in the garage, killing a man.” And yes, that one’s burned into my memory, too.

So Parker and Westlake … blame them for what comes next. I used the enforced solitude of the pandemic to write a couple of novels. The book I’m here to talk about, Magic City Blues, was written and sold first. Due to the vagaries of independent publishing, I withdrew the book from its original deal. (I’ve written extensively about the situation before, but if you want to hear it again, find me at Bouchercon in San Diego. I’ll be happy to hold forth.) Thankfully, Shotgun Honey Books offered to rescue my book. As it turned out, Magic City Blues is no longer my debut, but my second novel. A hell of a way to avoid the sophomore slump.

I’m proud to reveal the cover (designed by Ron Earl Phillips) here at Do Some Damage, and here’s a short synopsis that hopefully gives you an idea of what the book is about: 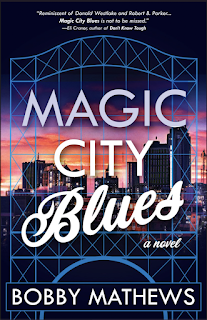 When low-level legbreaker Kincaid takes on a new assignment, he discovers it's not really a step up — it's a setup. The deal was supposed to be this: Protect Abby Doyle, the daughter of Birmingham, Alabama's most dangerous crime lord. But when Abby's fiancé is found murdered, Kincaid is forced to team up with BPD detective Laura D'Agostino to find the killer and protect Abby at all costs ... even from her own father.

One of the things I always loved about Parker and Westlake was their ability to lead the reader through their milieu — Parker’s Boston, Westlake’s New York — and I hope that I’ve done that with this book’s setting, Birmingham, Alabama. I hope you’ll come along for this dangerous, bloody march through the city. And if you see the shadow of a Boston PI or the ghost of a cold-blooded heister, know that it’s on purpose. Parker and Westlake have gone on to whatever reward is in the next life, but their creations still cast long shadows in the work of other writers, maybe especially in my own.

Bobby Mathews is the author of Living the Gimmick (Shotgun Honey Books) and co-editor of the forthcoming Dirty South: High Crimes and Low Lives Below the Mason-Dixon Line (Down & Out Books).