Once upon a time, a novel that's described as a "blistering black comedy about the American quest for redemption through real estate and a gritty picture of New York City in collapse" would not have been one that piqued my interest very much. The "blistering black comedy" part of this description would have drawn my attention as would the part about the book being "a gritty picture of New York City in collapse".  The period of collapse mentioned is the late 1960s, early 1970s, a time of high crime rates in the City and large pockets of urban blight.  It's a time, pre-gentrification, that some romanticize now for its griminess.  So far, so good.  But "redemption through real estate"?  A while back, that phrase would have not sounded especially compelling to me as a reason to pick up a novel and read it, but now as the years have passed and I own property, even if I'm not looking for anything like redemption -- more like just hoping I can go a few months without something breaking down in that house and causing me to dig into my bank account to fix it, yet again -- the idea of a novel centered around the ups and downs of real estate and your own relationship to a house you bought is one that I can relate to.  And absolutely it sounds like a fertile area for the darkest of dark comedy. 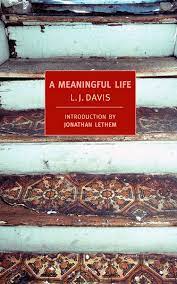 Such is the novel A Meaningful Life, by L.J. Davis, published in 1971.  It caught my eye in a Brooklyn bookstore, and when I read the description and saw the blurb on it from Paula Fox and read the introduction by Jonathan Lethem (these two, of course, having written some of the greatest Brooklyn novels ever), I was intrigued enough to buy it. Lethem describes it as one of the three great Brooklyn novels from that particular era, along with Fox's Desperate Characters and Thomas Glynn's The Building (which I haven't yet read). We are in the time of brownstones in what is now upscale Park Slope well before the area's "recovery".  As Lethem puts it, "The dystopian reality of late 60s and early 70s outerborough New York City can be difficult to grant at this distance; these streets, though rich with human lives, were collectively damned by the city as subhuman, crossed off the list.  Firehouses and police stations refused to answer calls, whether out of fear, or indifference, or both.  As L.J. told me once, most simply, 'Anyone who chose to move to the neighborhood was in some way crazy.  I know I was.'  How precarious this existence was -- morally, sociologically, financially -- was never exactly permissable to name outside of L.J. books, or at least not with such nihilistic glee."

Davis' main character is Lowell Lake, from Idaho. He comes to New York with his Brooklyn-born wife, who he met as a sophomore at Stanford University.  They drive across the country to live in New York City and then begin their life in Manhattan, Lowell with the intention of becoming a great novelist.  The novelist part never pans out, and Lowell winds up working for years as a technical editor at a periodical while his marriage to Betty, in ways cringeworthy, recognizable, and funny, gets worse and worse.

On a whim, after a subway trip that lands them in the wilds of Park Slope Brooklyn, he buys a run-down brownstone occupied by people you can only call squatters.  He insists that he needs to have the house despite his wife's trepidation.  This house somehow will change his life, give it a purpose, make his existence meaningful...he thinks.  It does not, naturally, but it does become something that obsesses him, further poisons his marriage, and both saps and sustains his creative side. It even, in the end, involves him in a murder, the consequences of which he seems oddly unconcerned about.

Davis writes with great nuance and control, able to switch tones at will from droll to detached to bleakly funny to menacing.  I laughed many times reading the book and felt myself quite often on edge, sometimes during the same passage.  A Meaningful Life is an urban novel par excellence and yet another example of a novel that drew attention when it was published but then faded into obscurity.  It happens to good novels so frequently.  In this case, Jonathan Lethem and then the New York Review of Books helped bring it back into the light, and it's a great thing they did.  Well before the Brooklyn of now, the thriving Brooklyn, the hip Brooklyn, that is home to countless television series both dramatic and comic, there was the Brooklyn of L.J. Davis' A Meaningful Life.  It captures the moment in time that was the dawn of the real estate transformation in a neighborhood, and though I live in the highly transformed Brooklyn of today (in Bed Stuy, not Park Slope) and hope not to end up where Lowell Lake does by the end of Davis' book, I could understand all too well a good bit of what his character goes through.  Glad I read it.

Posted by scott adlerberg at 9:05 AM

Great review. I need this book in my life. One of my favorite movies about that period of Brooklyn real estate is The Landlord. However, though it was filmed in Park Slope when it was still "the hood," the novel by Kristin Hunter takes place in Philadelphia.
https://catapult.co/stories/the-landlord-a-novel-by-kristin-hunter

Michael, I’m pretty sure you would love this novel.