Over here in America, PBS just dropped the eighth season of Endeavour, the prequel series to Inspector Morse and its spin-off, Lewis. My wife and I have enjoyed this series quite a bit, especially the interactions between the two lead actors. Shaun Evans plays a young Endeavour Morse while Roger Allam plays his superior officer, Fred Thursday. Their chemistry is fantastic, really serving as the backbone of the entire show and cast. That the show is a period piece—1971 in this current season—just adds to my love of the show.

But we’ve never seen either of the original shows.

Which is completely fine. For whatever reason, we only arrived at these characters via this prequel a couple of years ago. But it wasn’t until this week that we both agreed that we’d like to circle back and give the original show a look.

I was the one who voiced what we were both thinking: which characters, if any, appeared in the original Morse show? It was actually in relation to the Fred Thursday character. I wondered if any of the 33 original shows ever had the older Morse visiting with an even more elderly Fred Thursday. A brief glance at the Wikipedia page for Endeavour likely proves the answer. No, Fred Thursday does not appear in the original program.

That’s too bad, but it gives me hope that with the upcoming ninth and final season, the writers will tidy everything up and explain why Thursday isn’t in the original series. There’s the obvious answer. Maybe that’s the arc of Morse’s character. In this current season, he’s drinking more and becoming more aloof, telltale signs that is probably how the older Morse acts in the original.

This got me to thinking about someone in my situation, coming into an existing universe of stories during a prequel. Most of the time, the creators have to invent some new characters and not just have younger versions of the older/original ones. Star Wars did that—a lot—and many of those prequel characters get their own spin-offs.

Star Wars is a special case, of course, but if anyone ever came up to me and asked me where to start, I’d say follow the release order of the films. In that way, there are Easter eggs and shades of what’s to come sprinkled throughout the prequels. I suspect there are more than a few Easter eggs in Endeavour that longtime fans of Morse and Lewis pick up on that we don’t. That’s just good fan service. I wonder if a Morse fan from the jump—the first season aired in 1987—would have told us to start there just like I how I would introduce Star Wars to someone.

Be that as it may, my wife and I finally arrived in the Morse Universe—that’s a thing, right?—and we’re glad we’re here, no matter the route we took.

This week, Beau takes a look at Nothing Short of Dying, from Erik Storey.

Hailed by the bestselling writer William Kent Krueger as “the year’s best thriller debut,” this rollercoaster read features a Jack Reacher-like drifter protagonist with lethal skills whose mission to rescue his abducted sister pits him against a meth kingpin seeking to control all the trade in the Western United States.

Sixteen years. That’s how long Clyde Barr has been away from Colorado’s thick forests, alpine deserts, and craggy peaks, running from a past filled with haunting memories. But now he’s back, having roamed across three continents as a hunter, adventurer, soldier of fortune, and most recently, unjustly imprisoned convict. And once again, his past is reaching out to claim him.

By the light of a flickering campfire, Clyde received a frantic phone call for help from Jen, the youngest of his three older sisters. Then the line goes dead. Clyde doesn’t know how much time he has. He doesn’t know where Jen is located. He doesn’t even know who has her. All he knows is that nothing short of dying will stop him from saving her.

Tagging along with Clyde on this strange, desperate, against-all-odds rescue mission is a young woman named Allie whose motivations for hurtling into harm’s way are fascinatingly complex. As the duo races against the clock, it is Allie who gets Clyde to see what he has become and what he can be. 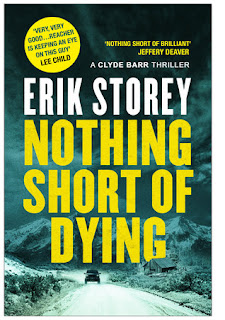 Get yours
Posted by Steve Weddle at 6:57 AM No comments:

Audible has today announced Geneva, the debut fiction title from actor and audiobook narrator Richard Armitage, star of The Hobbit and Netflix thrillers The Stranger and Stay Close.

To be released as an Audible Original on 20th October 2022, Geneva is an intricate and fast-paced psychological thriller which follows Nobel Prize winning scientist Sarah Collier and her husband Daniel as they travel to Switzerland for an important conference. Upon arrival they become entangled in a high stakes game with hidden players. Soon everything they thought they knew about their work, their marriage and even their sanity is called into question.

Aurelie De Troyer, Senior Vice President of International Content at Audible said: “We’re proud to have a longstanding relationship with Richard as one of our most celebrated narrators. We are even prouder to be releasing his authorial debut – a fast-paced character-driven thriller we know will have our listeners hooked.”

Richard Armitage commented: “The process of creating an original story has been an exciting opportunity for me. Crafting a psychological thriller, springing from a fascination with science and technology, and deep love of this genre is a dream come true. I’m honoured that Audible have chosen their platform as a place for my debut as a writer”

World English audio rights for Geneva were acquired from Jim Gill at United Agents. It will be released exclusively in audio only.

Richard Armitage is well-known for his work in film and TV, including his roles in The Hobbit trilogy, Ocean’s 8, Spooks, and Robin Hood, and has recently starred in Netflix thrillers The Stranger and Stay Close. In addition to his appearances onscreen, Armitage has lent his voice to animated series Castlevania, and is a listener favourite narrator on Audible, narrating a number of titles including the bestselling Jackman and Evans series by Joy Ellis.

Posted by Steve Weddle at 11:19 AM No comments: 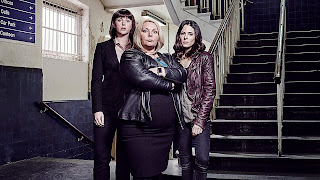 No, I didn’t spell offence wrong. No Offence is a British television series streaming on Acorn TV. Airing originally on Britain’s Channel 4, it follows a squad from the Manchester police department as they solve a case per episode while also tracking bigger conspiracies throughout season-long story arcs.

That description makes it sound ordinary. It’s not. It takes familiar cop-show tropes, turns them up to 11, and then gleefully demolishes them with a sledgehammer.

You all know me by now, and you know what I tend to like. And I’ll admit, this show hit all my sweet spots. Dry humor. Superb long-term plotlines. Fully realized characters. Female leads. Multiple female leads. Female leads who are written to be sexy and nerdy and bawdy and overweight and vulgar and sensitive, sometimes all at once. I can’t think of a single American show with that—pardon my male reference—with that kind of balls.

Look at that photo at the top of the page. Those are the lead characters. In a cop show. See a man anywhere? I know, there are definitely shows with female detectives. But they usually have a male boss. Or male lawyers backing them up. This has Detective Inspector Viv Deering (Joanna Scanlan, who needs to be in every show everywhere forevermore) and her two female seconds-in-command. In the second and third seasons, even Viv’s bosses are women.

The show aired from 2015-2018. It was the creation of Paul Abbott, who’s created multiple crime and family dramas, including the original Shameless, from which the American Shameless with William H. Macy was adapted. He said in 2019 he was mulling ideas for a fourth season, but later word came out that no more episodes would be made.

While I sit here and hope he reconsiders, you should start watching immediately. You can find it on Acorn, or on PlutoTV.