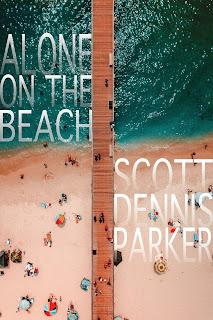 I just wrapped up watching season one of Slow Horses, which I enjoyed quite a bit.  I look forward to season two.  I hadn't realized going in that Jonathan Pryce is in it, in a small but not unimportant part, and as always, he's excellent.  In every role he's in, no matter how long he's onscreen, and whether he's nasty or benign, he conveys a strong cerebral quality.  Seeing him in Slow Horses reminded me for some reason of a TV film I saw years ago about a real-life murder case in which he played a very internal and hard to read character, the Man from the Pru.  That's the name of the film, from 1990, and it's based on a 1931 British murder case. 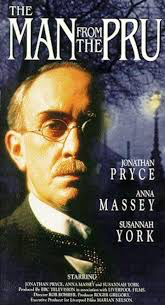 Pryce plays William Herbert Wallace, an English insurance man (Prudential Assurance Company) who was convicted, in 1931, of killing his wife Julia.  Wallace, who was 52, had left his house on the evening of Monday January 19 to play a scheduled chess game.  While there he was given a message which had been received by telephone before he arrived at the chess club.  It asked him to come to an address the next evening to sell insurance to a man named R.M. Qualtrough.  When Wallace went to make his call the next night, he found neither the address from the message nor any person called Qualtrough.  After the futile search, Wallace returned home, but when he got there, he had trouble getting inside his house.  Neighbors of his came across him in the alley behind the house, and now Wallace, who had told them he couldn't get inside his home, tried his back entrance again and it opened.  He went inside to find his wife beaten to death in their sitting room.
From here, the case, entirely circumstantial, only got stranger.  Among other things, after he was arrested, Wallace's home company, Prudential, conducted a secret mock-trial and found Wallace unanimously not guilty.  The company then sponsored his defense. Regardless, in the real trial, after an hour of deliberation by the jury, Wallace was found guilty and sentenced to death.  And yet, even this was not the end of the story, and Wallace appealed. Throughout, his personality did not work in his favor; he was a remote and circumspect human being, or, as some saw him, cold, and even when he was able to return to his job as an insurance man, the public on balance felt that he had got away with murder.
But had he?
Officially, the case remains unsolved, and the comments over the years testify to its mysteriousness.
Dorothy L. Sayers said, "The Wallace murder had no key-move and ended, in fact, in a stalemate."
Author John Rowland in a book about the case said, "Almost every fact in the evidence was accepted by both prosecution and defense, but every fact could be interpreted in two ways."
And my favorite, from Raymond Chandler, who said of the case: "The Wallace case is the nonpareil of all murder mysteries...I call it the impossible murder because Wallace couldn't have done it, and neither could anyone else...The Wallace case is unbeatable; it will always be unbeatable."
Jonathan Pryce, with that internal, cerebral and aloof quality, enigmatic to the core, plays Wallace in The Man from the Pru, and it's a film worth seeking out to see how the entire odd case unfolded.
I'm not sure whether it's streaming anywhere or on home video, but I have seen that it’s available for viewing on You Tube.
Posted by scott adlerberg at 10:40 AM No comments:

The Agatha Awards, first given in 1988 and considered by many to be the most prestigious awards in the mystery community, spotlight the art of the traditional mystery. These mysteries are intelligent, engaging, usually family-friendly and typically don’t contain unwarranted violence, graphic sex, or unnecessary blood and gore. These tales often focus on amateur sleuthing, familiar settings or a cast of characters with a mutual and complicated history. The awards were presented Saturday, April 23, in Bethesda, Maryland during the Malice Domestic mystery fan convention.

Here are the Agatha Award winners for works published in 2021:

In Pelican, Louisiana, Valentine's Day has a way of warming the heart. But the air at Crozat Plantation B&B turns frigid when celebrity chef Phillippe Chanson checks in. And when the arrogant Phillippe perishes in a fiery boat crash, Maggie Crozat's dear friend JJ lands in very cold water.

Bridey Kelly has come to Greenway House—the beloved holiday home of Agatha Christie—in disgrace. A terrible mistake at St. Prisca’s Hospital in London has led to her dismissal as a nurse trainee, and her only chance for redemption is a position in the countryside caring for children evacuated to safety from the Blitz, but when a body is discovered nearby, the idyllic setting becomes host to a deadly mystery.

When Lila Macapagal moves back home to recover from a horrible breakup, her life seems to be following all the typical rom-com tropes. She's tasked with saving her Tita Rosie's failing restaurant, and she has to deal with a group of matchmaking aunties who shower her with love and judgment. But when a notoriously nasty food critic (who happens to be her ex-boyfriend) drops dead moments after a confrontation with Lila, her life quickly swerves from a Nora Ephron romp to an Agatha Christie case.

These light, often funny stories of mystery and intrigue, will transport you to a variety of shores, from the rocky coastlines of New England to the white stretches of sand on the Atlantic, to the teal and emerald waters of the Gulf Coast, the surfing havens on the Pacific, and even beaches in between.

How to Write a Mystery: A Handbook from Mystery Writers of America by MWA with editors Lee Child and Laurie R. King (Simon & Schuster)

Mystery Writers of America (MWA) is known for providing unparalleled resources on the craft, art, and business of storytelling, helping writers of all levels improve their skills for nearly a century. Now, this handbook helps authors navigate the ever-shifting publishing landscape—from pacing, plotting, the business side of publishing, to the current demand for diversity and inclusivity across all genres, and more.

I Play One on TV by Alan Orloff (Down & Out Books)

All's great for sixteen-year-old actor Dalton Black as he portrays a teen killer on a crime reenactment show. That is, until he realizes someone is stalking him. When that someone turns out to be Homer Lee Varney, the man convicted of the murder, things take a dark turn, and Dalton is afraid for his life. What does Varney want? Some sort of twisted revenge? Or something even worse?
\
Congratulations to all the winners and nominees.
Posted by Marietta Miles at 8:36 PM No comments: