Can you be a writer without using paper?

I’m a writer and I use a lot of paper. I make notes on yellow legal pads, I make lists of character names on a giant spreadsheet printed out on an 11x17 tabloid-sized piece of paper. In the past, I have used hundreds of note cards to map out a story. Those note cards would then be pinned to the cork board in my office. And don’t get me started on post-it notes that I’ll use to jot down random pieces of things for the story and post them on monitors, laptops, keyboards, or the desk.

Then there are the drafts. Yes, I know there are folks who write and edit within whatever word process they’re using. I can do that, too, but more often than not, I prefer to print it out and read it that way. Sure, I format the manuscript to be single spaced and I print on both sides of the paper, but still, if I have a 300-page manuscript, that’s 150 pieces of paper.

Suffice it to say, when I’m writing a novel, I simply use a lot of paper. This amount goes up and down depending on the length of the writing project. For shorter pieces, I usually don’t have all the background stuff, but I still have the various drafts with all my marks in green ink.

Late last year, I got to thinking if there was another way, a paperless way, to brainstorm, write, edit, format, and publish stories. I came up with a qualified answer: Yes, I think so, but certain equipment and apps would make this job easier.

First off, I needed a new iPad. Mine was a second generation that basically did nothing for me other than allow me to read comics and ebooks. If this was going to work, I needed new tech.

I purchased a refurbished 2020 iPad Pro with a second generation Apple pencil. Wow. Is this thing amazing. Granted, when you’re coming from a 2012-era iPad, most anything is an upgrade, but I’m particularly impressed by the fact that I can get an entire ‘piece of paper’ on the screen at the same time.

The pencil is super cool and seamless. There is no visible lag at all. Among the coolest things: a simple double tap on the pencil changes the function to the eraser (while another double tap shifts it back to the pen). Thus, without even changing your hand position, you can write, make a mistake, erase, and start writing again in seconds. Tres cool.

I paired my Bluetooth Apple keyboard with the iPad and use the device as my primary means to write. But I do not plan to take the iPad to the office (yet) so I compose in Google Docs. That way, I can sync my Chromebook and bring it to the office. It’s rugged and a single unit so it’s been my preferred in-the-office personal device for over two years now.

When it comes time to edit the completed file, I use GoodNotes. Not only does it allow me to edit PDFs. It’s really neat to have the iPad in my lap, pencil in hand, and just read and edit the text. It’s pretty much paper-like, but still digital.

This app is good for general note taking. So far this week, I’ve worked on two short stories, completing one and more than halfway through the second. As such, I don’t necessarily need a notebook with character names, etc., but when I start a new novel, this will be the place where I store said notes. It syncs to my phone so when I’m out with my Chromebook, I’ll have my notes. Granted, I can’t use (nor would I have) the pencil with the iPhone, but that’s no big deal.

Here’s a screenshot of page one of the completed short story. 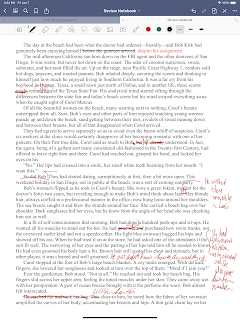 From there, I’ll be able to make those changes in the manuscript and nary a piece of paper will be needed.

While I have not yet published anything, I already know how to do that part. I’ll spell it out in a future post.

I have an entire process flow, but I want to test it first, work out any kinks, before I share it.

So, am I the only one who is writing without paper? For you other paperless writers, what are some of your preferred tools and apps?

This week, Beau takes a look at NOIRYORICAN by Richie Narvaez.

A reluctant assassin is born. A con man tries to sell the Grand Central clock. A superhero is dying to lose her powers.

In thirteen fast-moving stories, the author of Hipster Death Rattle explores the tragic world of noir fiction with a wide range of Latinx characters. These stories define noir as tales of people who fall not from great heights but from the stoop and the sidewalk.

A follow-up to the author’s Roachkiller and Other Stories, which received the Spinetingler Award for Best Anthology/Short Story Collection, this contains a sequel to that anthology’s eponymous story. 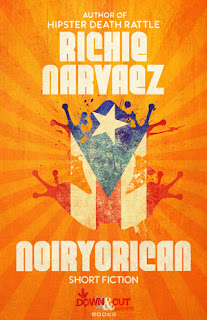 Get yours
Posted by Steve Weddle at 9:44 AM No comments:

Ringing in the new with Meriah Crawford, in a flash. 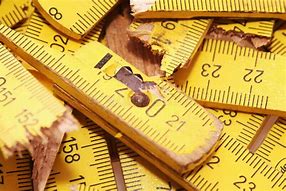 With this week’s Flash Fiction Challenge, I introduce you to Meriah Lysistrata Crawford. Our RVA City friend is an associate professor of research and writing at Virginia Commonwealth University, as well as a private investigator, writer, and editor. She has published short stories in several genres, a novella, essays, a variety of scholarly work, and two poems, and co-edited the anthology Trust and Treachery: Tales of Power and Intrigue. Meriah has also co-written several stories, as well as the novel The Persistence of Dreams, with Robert Waters.

At VCU, Meriah teaches a mix of research and writing classes for sophomores and freshman, as well as literature, creative writing, interdisciplinary studies, and a variety of topics in independent studies. Her wide-ranging research interests include trauma, point of view, and teaching and learning.

Meriah has an MFA in creative writing from the University of Southern Maine’s Stonecoast MFA program, and a PhD in literature and criticism from the Indiana University of Pennsylvania.

For more information about her work, including articles about writing, visit her website at www.meriahcrawford.com, or connect on Twitter:

We’re grateful Meriah joined us in our flash fiction foray.

What is this challenge?

A Killer’s Dream
Meriah Lysistrata Crawford
The letter “P” printed on hot pink paper was pinned to his chest with the broken end of a yardstick. TV told me there was a test to tell the type of printer. Of course, the county couldn't afford it. Killing without consequences in Cabot Cove was a killer’s dream. 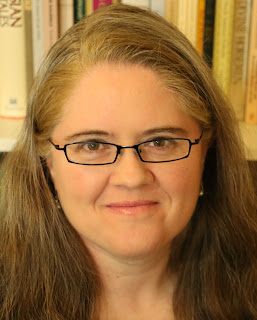 Posted by Marietta Miles at 9:56 AM No comments: