Today, a one-question quiz.  There's no grade involved, though, no right or wrong answer per se.

In Zadie Smith's essay collection Feel Free, which I've been reading on and off for months, there's a section made up of Harper's book reviews she's done.  One is a review of a novel called Seven Years by a Swiss writer named Peter Stamm. 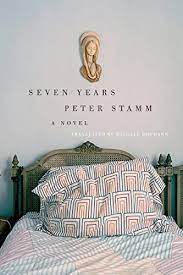 I never heard of Seven Years or read it, though after reading Zadie Smith's review I'm curious to read it. Smith describes the plot and the characters and talks about how the book is largely a critique of feminism, specifically first-wave feminism.  She says "Seven Years feels to me like a Catholic novel, an intriguing addition to a tradition that includes The Power and the Glory, The Prime of Miss Jean Brodie, and the lesser-known An Experiment in Love by Hilary Mantel (which is also about the failures of first-wave feminism...)".  As I say, I've never read Seven Years, and I'm mentioning all this to give you an idea of what the book is about.  It sounds interesting enough.  But it's what Smith says to wrap up the review that truly got me thinking.  She says she made a note in the book's margin on the last page, then couldn't believe what she'd written.  That's because the author had made her ask a question about something she normally doesn't question.  And she concludes by saying this:

"Seven Years is a novel to make you doubt your own dogma.  What more can a novel do than that?"

After reading this, I thought: she's absolutely right.  A novel can't be much more effective or involving than one that makes you look at things, even if only for a few moments, through a perspective entirely different, or even opposed to, your usual one.  So my question is, what novel has done this for you, if any?

I'd say for me a novel that does this is Evelyn Waugh's Brideshead Revisited.  A family of wealthy English Catholics with a palatial estate, politically reactionary, that stands proudly against the working class and any notions of egalitarianism, in which a non-religious person at the end of the book appears to convert to a believer -- there's almost nothing in this book, in the world outside the book, I ascribe to or believe in.  And yet by the end, in the hands of the brilliant Waugh, I may actually have, for a stretch of time, doubted some of my own dogmas. Without question, as Smith says, quite an accomplishment for a novel.

Any novels that have done this for you?

Posted by scott adlerberg at 8:37 AM