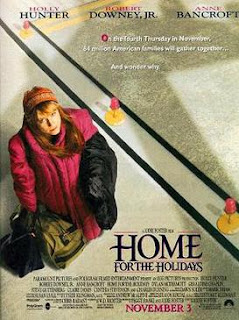 For six years now, my family of three have watched “Planes, Trains and Automobiles” the night before Thanksgiving. And yeah, it is still a funny and heartfelt as it as always been. Heck, minutes before any given scene or line of dialogue shows up on screen, I’ll find myself laughing at it. Case in point: when that pickup truck driver arrives to drive Steve Martin and John Candy to the train station.

The other movie tradition is “Home for the Holidays,” the 1995 film directed by Jodie Foster. Holly Hunter stars as Claudia, a forty-year-old single mom who travels from Chicago back home to Baltimore for Thanksgiving. She’s just lost her job, her sixteen-year-old daughter matter-of-factory announced that she’s planning on sleeping with her boyfriend at her boyfriend’s family house, and she’s just counting the hours until she can get back on the plane and fly home. In between, she has to survive being with her empty nest, retired parents (Anne Bancroft and Charles Durning), her straight-laced, bitter older sister (Cynthia Stevenson), and her hyper, over-the-top, gay younger brother (Robert Downey, Jr.). Tagging along with her brother is Leo (Dylan McDermott) who Claudia assumes is with her brother but is actually there to meet her.

The family is dysfunctional and the first time I saw it, that dysfunctionality bothered me. You see, I’m not from that kind of family. I’m an only child of only child parents so growing up, if all the grandparents showed up, there was only seven people in the room. But even when I think about my extended family, I can’t think of any member who doesn’t get along with everyone else.

As the years have gone on and I’ve watched some truly wonderful acting, many of the film’s little moments stand out. It could be an off-hand remark Claudia says to her brother or Downey Jr.’s eyebrow raised to say more than words could say or Durning’s chance answering of the phone and hearing his son’s husband on the other end of the line and this straight-laced, old fashioned man summon up the words to congratulate him while softly touching his son’s face.

But on Thursday night, another scene just walloped me and I should have saw it coming. Late in the movie, on the morning after Thanksgiving when Claudia has to fly home, she walks down to the basement. There she finds her dad, sitting alone, watching his home movies. There, flickering on the white screen, are the images of his past, his children as kids, and he and his wife as they used to be. The film is made to look like it was shot in the Sixties, with slightly overexposed colors.

Her dad, having just experienced the latest in a probably long line of difficult Thanksgiving dinners with his adult children and their families, starts to give his daughter life advice. He recounts a day that he considers one of his best memories. It took place back in 1969 when his family watched as a 727 took off and he and Claudia watched with eyes wide open. They were fearless and that’s his advice to his adult daughter: be fearless and go after Leo.

The subtext of that scene is bookended by the home movies and the last words he says that ends the scene: “I wish I had it [that 727 moment] on tape.” Durning is a retired empty nester whose family has grown up, moved away, and changed. He can’t get back what he had, so he’s comforted with memories and home movies.

Last year when my family of three watched this movie, my son still lived with us. This year, he returned home from his own apartment to stay with us these few days. My wife and I are empty nesters now, and while that scene of this wonderful movie has not changed, we have. We all three have. Life always moves on.

So cherish each and every moment of your life for it won’t ever happen again. And take as many pictures and videos as possible to help you remember. Because one day, we’re all going to find ourselves watching home movies or flipping through a photo album (physical or digital) and remembering our favorite moments of life.

And always be fearless.