Nostalgia? Only If It's Noir 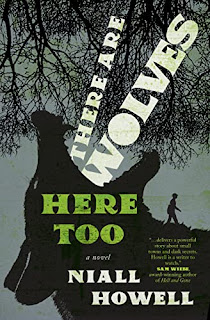 I’m pleased to welcome back Niall Howell today, who first guested when his debut novel, the excellent Only Pretty Damned, came out. He’s back now with There Are Wolves Here Too and he’s here to talk about the time period (the ’90s!), and give us one of the best descriptions of noir I’ve ever read. Take it away, Niall—

When I was a kid, my friend’s dad kept this really tacky poster up in their basement. It was one of those plaque-mounted things you’d see in kitschy 50s-style diners: an ensemble scene of a young Elvis and a Marlon Brando playing billiards while Marilyn Monroe looks on from a nearby booth enjoying cocktail. A broody James Dean stands in the corner by himself, regarding the others over his shoulder with sleepy eyes. Airbrushed. Matte sheen. It looked like it was done by a paint-by-numbers sort of artist. I was probably around five or six the first time I saw the poster. Sometimes it would be moved to a different wall, but I can’t remember a time it wasn’t up at my friend’s place.

At the time, I didn’t know the scene depicted was totally fake. For a number of my childhood years, I actually thought that this sort of gathering was common in 1950s, that if I were to walk into a diner at that time I might actually see this group of people together, chalking their pool cues, drinking their drinks, brooding. I knew nothing then of the dishonest glimmer of nostalgia, of the ways that our culture loves to use creative license to cherry-pick the brightest characteristics of bygone eras—the icons, the fashion, the glamour—and cast anything that might have detracted from that coolness aside. Naturally, Joseph McCarthy is nowhere to be seen in this fantasy diner scene. He can’t be spotted peering in through the diner window looking for blacklist candidates. In the sliver of parking lot we can scope from inside, James Dean’s death car is nowhere to be seen either. Ditto for Mr. Presley’s and Ms. Monroe’s prescription bottles. And there’s no sign on the diner door indicating which “type” of patrons are allowed in and which aren’t. If the subjects of the poster are any indication, the 1950s must have been great.

For the longest time, most of my perception of past eras had this sort of deceptive glimmer to it. If it didn’t come from my friend’s house (his dad not only had a lot of this tacky 50s paraphernalia, but was also an Elvis freak; every room had a painting of the King in it, and—fun fact—at least one of those paintings was legitimately haunted), it came from my own home. My own dad was and is an obsessive record collector with a strong bias to all things 1960s, and my mom has always collected antiques, which meant my sisters and I spent a lot of time roaming mall-sized antique palaces during many family trips, much to the chagrin of the owners of said palaces, who posted signs about buying what your kid broke and threatening that unattended children would be sold to the circus. My being bombarded with the carefully curated beauty of past led my young self to believe the almighty back then was great. As far as I knew, by being born in 1985 I’d missed a decades-long stretch of glory days by about fifteen years. What luck.

I’ve had nostalgia on the brain a lot over the past few years. While writing my second novel There Are Wolves Here Too, a coming-of-age noir story set in 1997, I found myself, a child who did the bulk of my coming-of-age in the nineties, thinking about my own good old days. About how, when compared to earlier decades, they didn’t seem all that good. The nineties lacked the shine of the decades before it. There was no shortage of neon, mind you. But the shine? Pretty much non-existent. I have many great memories from that time, but there’s really nothing about the decade that makes me want to book a trip in my neighbourhood time machine. Recently, I’ve come to wonder where this perceived lack of shine came from. Did it have to do with the fact that I was alive during the era I was trying to capture on the page? Did the nineties actually suck? Were they any worse than any previous decade? Or do all decades need to spend a predetermined amount of years in the barrel before being extracted and enjoyed for cask-strength nostalgic goodness?

When I revisited my memories of the decade during my writing, I found myself recalling cringy fashion—baggy everything, frosted tips, pants that had pockets inside of other pockets—plenty of vapid music (not all of it, but commercial radio and music TV stations were populated by boybands, cheesy pop-rock, and electro-pop), and the commodification of everything. You could put a price tag on pretty much anything, call it a collectible, and the masses would come in droves. For proof of this, look no further than Pog and Beanie Babies, both of which had stores dedicated to them at the mall by my childhood home.

The more I think about it, though, the more I wonder if it was the undesirable and cringe-inducing qualities of the era that made me want to write about it. My wheelhouse is noir. I won’t protest anyone saying I write crime novels or thrillers, but if I get any say as to what my writing is, I’ll tell you before anything else it’s noir. Here’s a genre that focuses on exploring the worst of human emotion. Greed, jealousy, desperation. It’s a genre without any true good guys, stories of people who are just different gradients of grey. It’s bleak and often miserable, and any redemption comes at a steep price. It’s a genre that’s often set in locales that have a superficial glamour to them. Often we find in noir a protagonist who is either forced or compelled to get beneath the shiny facade and operate in what is tiredly referred to as the seedy underbelly. Usually we come to learn that this underbelly is the real foundation of said locale.

You probably see where I’m going with this. Noir has an underlying desire to corrupt its characters and its setting. It’s the corruption or tainting of a beautiful space. I wanted to write about this. But in the case of my story, the beauty wasn’t a city with a promise like Chandler’s Los Angeles, rather the thing facing corruption was my protagonist’s blissful naivety, that pure kind that you can only have as a child.

My story’s protagonist is a thirteen-year-old boy named Robin who is one of the last people to see his classmate’s sister before she goes missing. The young girl’s disappearance sends a ripple through his small city of Haddington Springs, Alberta, causing long buried secrets to seep to the surface. Young Robin, moving from childhood into adolescence, is forced to confront dark truths about his world and himself. It's hard to pinpoint where ideas come from, but I think the seed of it came from the desire to write a story where something that seemed pure faced the threat of corruption. From there, the natural progression seemed to be setting the story in the era I grew up in.

Sure, a lot of the decade makes me roll my eyes for so many reasons, but the more I think about it, the more I realize most of these reasons are superficial. I was a kid then, so my understanding of the world was a superficial one. And despite my viewing of the decade as being by-and-large vapid where it counts, there are things I miss. I’d love to live in a world without smart phones, and I can’t tell you how much I miss renting a stack of VHS tapes from a video store on a Friday night with my friends. So yeah, it was a good time. Which is exactly what sets my noir sense off. Corrupt! Corrupt!

I was recently asked if I planned on setting future novels in the past. The short answer is yes. Between There Are Wolves Here Too and my first novel, Only Pretty Damned, which is set in a circus during the early 50s, I’ve come to realize how much I enjoy looking back. I think proximity offers a certain perspective that I can’t apply to the present day. And it’s easier to spot the false shine from a distance. 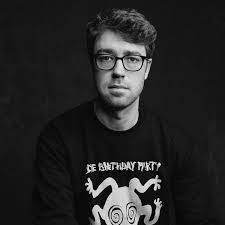 Niall Howell was born and raised in Calgary, where he still resides. His short fiction has been published in The Feathertale Review and FreeFall and he holds a Bachelor of Arts in English from Mount Royal University, and a Bachelor of Education from the University of Calgary. He enjoys playing bass, and obsessively collects records and comics.

You can buy There Are Wolves Here Too on IndieBound or Amazon.