There are all sorts of lines -- funny, ironic, sad, haunting, tragic, you name it -- that can make a great last line to a film.  And everyone has their personal favorites, based on the film the last line ends or the line itself.  A few of my favorites include these:

Robert Armstrong as Carl Denham at the end of King Kong explaining what killed the great ape:  “No, it wasn’t the airplanes. It was beauty killed the beast”

Charlton Heston as Taylor on the beach, on his knees, at the end of Planet of the Apes declaiming, "You Maniacs! You blew it up! Ah, damn you! God damn you all to hell!"

The two British government bureaucrats at the end of The Day of the Jackal discussing the mysterious assassin, now killed, they and the French police have been hunting for the entire movie. Over and over, each time they thought they might know who the Jackal was, he turned out to be using an alias.  And at the very end, they have a final discussion about him, as his coffin goes into the ground:  "But if the Jackal wasn't Calthrop, then who the hell was he?"

About this man's identity, as they were for the whole film, the British pair are entirely clueless.

Lawrence Walsh, the associate of J.J. Gittes ( Jack Nicholson) at the end of Chinatown (of course): “Forget it, Jake. It’s Chinatown.”

Ray Liotta's character at the end of Goodfellas saying, "I get to live the rest of my life like a schnook," before slamming the door in our faces.

These are just a few of my favorites.  Any film person could go on and on with these. But I do have to say that one last line I always thought brilliant is the last line from the first film made by the Coen Brothers, Blood Simple. That's after Francis McDormand has shot M. Emmet Walsh through a bathroom door and he lies dying under a sink in the bathroom.  Because she believes she shot a person other than the person she actually shot, she misnames her unseen victim, and as he lies dying and laughing, he says, "Well, mam, if I see him, I'll sure give him the message."

A blackly humorous misunderstanding leads to a last line that you could not improve upon in that context.  There's nothing inherently dramatic in M. Emmet Walsh's words, but it's as if everything in the film has led to this line. It's also a laugh-out-loud line that allows you to release a lot of built-up tension as the credits rolls. 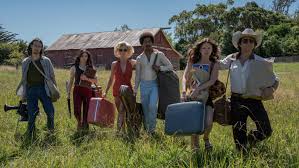 I had a similar experience the other day when I watced Ti West's horror film X.  It's got maybe the best last line, based on a character's total misunderstanding of what's gone on in the story, that I've seen since Blood Simple.  X overall is very good, a  Seventies set film about a porno film shoot taking place at a rural property in Texas where two old and quite odd people live.  The references to The Texas Chainsaw Massacre and to many other films, from Hardcore to Debbie Does Dallas to Alligator to Boogies Nights, abound.  Ti West knows exactly what he's doing, and yes, in a clever way, he brings the fun and humor back to slasher films.  All this while maintaining a quite tense and suspenseful mood and while making as well a sympathetic commentary on human desire and the perils of aging.

And after all the blood has been shed and many people have perished and the police have arrived at the rural property to try to make sense of what happened there that led to all the carnage they're seeing, the sheriff and his officers are initially baffled. Then one of the officers comes across the movie camera the porno shoot people were using. This finding leads to the film's last line, spoken by the sheriff, who posits exactly what he thinks happened on the property, and his definitive vulgar statement is so off the mark (and yet an apt commentary on the film you've just seen) that it left me cracking up while, as in Blood Simple, the credits start to roll. 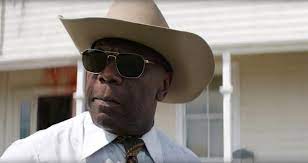 Needless to say, I'm not going to reveal that last line here because it would ruin it for those who haven't seen the film. Besides, if you haven't seen the film, it won't mean anything. The entire movie's context is needed to appreciate what the sheriff says.  But the line is indeed a gem, and a film that ends with a kicker like this one can only leave you feeling good about the movie.  It's very satisfying.

So, nothing much more to say here.  Other than, if you haven't seen X and like horror films, if you want to see an enjoyable one that builds to a perfectly crafted final line, give Ti West's film a shot.

Not a film but a book, and little if anything to do with crime fiction but how about