Award-winning author and friend of the blog A.J. Devlin returns today with his third “Hammerhead Jed” novel. This one take pro wrestling and ups the beat-down stakes by throwing in some MMA. I highly recommend the whole series. Feel free to start with this one. Here’s A.J. to tell us more about it. - Claire

It’s an honour and a thrill to be back on DoSomeDamage.com for a third time – promoting a third book – thanks to the talented and generous Claire Booth!

Every time I contact my south-of-the-border author friend she always has an open mind and a great sense of humour, regardless of whether I’m pitching her potential ideas about discussing indie pro-wrestling, kidnapped snakes, roller derby action, competitive wiener dog racing, or banana milkshakes … lots and lots of banana milkshakes.

However, when I told Claire the next chapter in the “Hammerhead” Jed pro-wrestler PI mystery-comedy series was about how my grappling gumshoe and Dairy Queen aficionado would catch a case that drew him into the tight-knit mixed martial arts community – which ultimately leads him to encounter an exclusive and unique no-holds-barred fight club – she seemed intrigued.

Despite my great love for independent professional wrestling and women’s flat-track roller derby, there’s no denying they both lean more toward being considered “fringe sports,” whereas over the last twenty plus years MMA has absolutely exploded into mainstream media and pop culture. However, this kind of extreme combat has its own unique origin, and that’s where I wanted to take both my protagonist and this particular narrative. It can be argued that some of the toughest and most devastating fighters ever to throw down were never known by many, save for those on the receiving end of their beatdowns, until the likes of street fighters and real life urban legends such as Kimbo Slice began to bridge the gap between what was whispered about and out of sight and what you can now regularly view at a pub on a weekend the way you would a hockey or football game.

If there is no glamour, no pomp and circumstance, and certainly no pay outs, what drives these fierce city warriors to fight in the first place? Is it pride? Machismo? A primal need to be a dominant “Alpha Male?”

Or is it something more … something deeper, perhaps, that pushes them to punish their bodies with a guarantee of almost little-to-no fanfare? While some of these questions are answered in my latest book, each character’s reasons for finding themselves in such a predicament and environment are wholly different and distinctive, just as I imagine they would be for the real-life fighters who served as inspiration for this bare-knuckled backdrop of brutality. 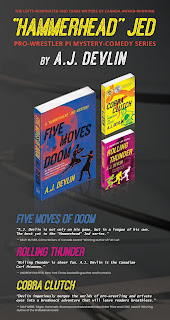 Ultimately, what I really wanted to achieve in Five Moves of Doom was to try and find a way to not only provide the signature escapist action and humour I hope my series has become known for, but also go deeper into the psyche of “Hammerhead” Jed, all without sacrificing the tempo of what I worked hard to try and make an engrossing and page turning story.

As a pro-wrestler turned PI, and being the same kind of hoss ring general akin to squared circle legends like Stone Cold Steve Austin, The Rock, and Triple H, there’s no denying that “Hammerhead” Jed Ounstead is very much defined by his physicality and is used to being the biggest and toughest guy on the scene.

While Jed is also certainly clever and has his own style and guile, when conceiving of where next to take such an affable and offbeat investigator I found myself wondering what would happen if while working a case he found himself as more than just an underdog? What if he was suddenly unable to not only rely on his usual brawn to get him through the kind of tough scrapes he’s encountered so far as a sleuth, but was also shaken to his very core and questioning who he is not just as a detective or a skilled combatant, but also as a man?

How would this person continue on without the advantage they had become so accustomed to? Would they lick their wounds? Pull up their bootstraps and try again? Come up with another strategy or change their tactics? Or would they simply through in the towel altogether?

I believe that when you take a character and strip them of their most essential and intrinsic quality there is an opportunity to showcase an emotional depth that might not often be able to be examined in generally fast-paced and fun genre fiction such as mysteries. And I thought maybe such a development might lead to some engaging drama that could perhaps allow me as an author to do something a little bit different this time around with such a stalwart series lead, and, in turn, offer something both familiar yet also fresh. By exploring these themes in Five Moves of Doom I’m convinced for better or worse that a much more vulnerable “Hammerhead” Jed is revealed, and, as a result, readers may find themselves getting to know him better in this threequel than in the first two books combined. 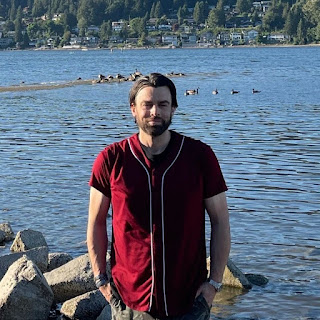 A.J. Devlin grew up in Greater Vancouver before moving to Southern California where he earned a Bachelor of Fine Arts in Screenwriting from Chapman University and a Master of Fine Arts in Screenwriting from The American Film Institute. After working as a screenwriter in Hollywood, he moved back home to Port Moody, BC, where he now lives with his wife and two children.