Last night, for the first time in many years, I watched Sidney Lumet's 1973 film, The Offence, starring Sean Connery.  It's yet another of Lumet's strong cop films, though this one is set in England, not New York City.  Connery plays a veteran police detective who badly beats up a suspected child molester while questioning him at the police station.  The suspect (and throughout he remains just that, a suspect) is played by Ian Bannen, who brings an intense creepiness to the role.

What prompted me to watch the film last night was some reading I'm doing.  I'm reading a book now on the films of Christopher Nolan (The Nolan Variations, by Tom Shone), and in the chapter discussing The Dark Knight, which includes remarks from Nolan himself, the book talks about the influence of Lumet's films on Nolan, how Lumet's sense of "systemic rot...a justice system out of balance...a universe permanently askew" fascinate Nolan.  These qualities resonate in a lot of Lumet's films, of course, movies such as Serpico, Dog Day Afternoon, Prince of the City, The Verdict, and Q&A.  But The Offence in particular is a Lumet film that has made a big impact on Nolan, and in the interplay between Ian Bannen's mocking child molester suspect and Sean Connery's cop, a man ridden with guilt for the things he has seen and done, or not done, over his twenty years on the police force, a man whose head flashes often with gruesome images from crime scenes he has worked, there is much that Nolan would draw upon in The Dark Knight. 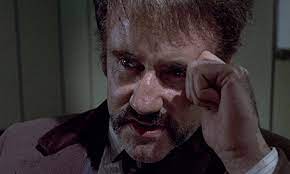 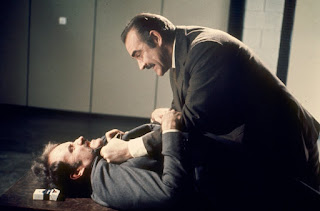 Without giving too much away, let's just say that in The Offence, the interrogation between Connery and Bannen, which is shown more than once as the film makes clear what precisely happened while they spoke, comes to a climax when Bannen's character, despite the blows he has taken from Connery, laughs at Connery in the most unnerving fashion.  Face covered with blood, knowing he will be hit some more, he laughs and laughs.  It doesn't matter that Connery is the cop and has the supposed power in the scene or that Bannen's character is accused of atrocious crimes (child rapes). Nothing Connery says or does stops the suspect from laughing.  Connery wants to know why the suspect is laughing, and unable to get at the root of it no matter what he asks or demands, no matter how hard he hits the guy, the mockery makes him only angrier and angrier. If any of this brings to mind the interrogation scene between Batman and Heath Ledger's Joker in The Dark Knight, when Batman winds up beating the Joker viciously even while the Joker laughs and giggles at him maniacally, his laughter only making Batman feel more and more impotent, the Joker saying "You have nothing," even as he gets walloped and spits out a tooth, well, it should. Nolan using Lumet as an inspiration for his film is something that makes a lot of sense and not one that comes as a surprise exactly, but it's not one I made before. 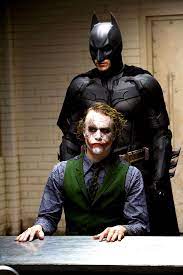 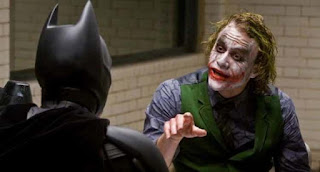 The criminal may be in custody, the enforcer of law, or at least of order, may have a physical advantage over you, but chaos and provocation get the last -- and it's a chilling one -- laugh.

Posted by scott adlerberg at 7:25 AM