I was recently talking with someone about the Strugatsky Brothers and the books of theirs I most like.  We were chatting about the science fiction novels, which I've written about elsewhere, and I mentioned that, in fact, my favorite Strugatsky Brothers novel is their take on the mystery novel, The Dead Mountaineer's Inn. I wrote about this book also several years ago, but I figured what the hell, there'd be no harm in putting the piece up again, since it's a book always worth promoting.

In any event, here it is: 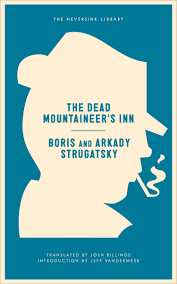 In the late 1960s, Boris and Arkady Strugatsky, the most popular science fiction writers in Russia, decided to write a mystery novel. The Dead Mountaineer's Inn was published in 1970, and its creation may have been motivated in part by the weariness they felt struggling with the Soviet authorities. Once writers of optimistic science fiction that the authorities backed, they had changed with time, and so had their relation to the authorities.

Their work over the years turned more dystopian and satiric, obliquely critical of a system that, in the wake of the post-Stalin era thaw, had not delivered on its promises. The brothers liked the mystery genre, and Arkady in particular, who spoke English well, had read such writers as Rex Stout, Erle Stanley Gardner, John LeCarre, and Dashiell Hammett. None of these writers were well-known to the Russian public at the time; since the 1930s, the government had all but banished detective fiction. As Boris wrote in his 1999 memoir, Comments on the Way Left Behind, they meant to write a lighthearted, commercial novel that would be fun to write and raise no alarm bells with the censors.

What they actually concocted was a mystery with a classical set-up. There’s a bizarre murder that takes place at an isolated inn, a detective on vacation, and a cast of oddball suspects. The idea seemed straightforward enough, but of course, being who they were—masters of the weird and the speculative—their novel came out as a genre-masher, something decidedly non-formulaic.

As the novel starts, police inspector Peter Glebsky has left his job and the city behind. He’s also left his wife and kid at home to spend two weeks by himself at a ski chalet called The Dead Mountaineer’s Inn. The inn sits in a remote valley near a place called Bottleneck Pass, and Glebsky intends to enjoy the isolation. He just wants to lounge around, sip port, and ski. He’s a pretty good skier, and the first time he hits the slopes, he feels exhilarated:

With every breath I left myself further behind…left the tightly wound moralist who followed every law to the last letter, the man whose shirt buttons shone, the attentive husband and exemplary father, hospitable to his friends and friendly with his relatives…I was overjoyed to feel all this leaving me, I hoped that it would never return, that from this point forward everything would be light, elastic, crystal-clear, that it would proceed at this same furious, happy, youthful pace, and how good that I’d come here…

The inn has some odd things about it. To begin with, its name—derived from a mountaineer who died nearby when he fell from a cliff and set off an avalanche. The inn’s owner, Alex Snevar, is an eccentric designer of wind turbines he builds himself, and his dog, a Saint Bernard named Lel, seems to have preternatural intelligence. Indeed, Snevar describes his pet as “Sapient,” saying that he “Understands three European languages.” Though the mountaineer died six years ago, Snevar talks about him often, and the place seems imbued with the dead mountaineer’s presence, which Snevar points out to him.

“Yes!” the owner cried. “There’s HIS pipe. That’s HIS jacket. And that over there is HIS alpenstock. ‘Don’t forget your alpenstock,’ I said to him that very morning. He just smiled and shook his head. ‘You don’t want to be stuck up there forever!’ I shouted, a cold premonition passing over me…”

…I muttered something about a lack of respect for the dead.

Glebsky doesn’t want riddles and complications on his vacation, but the unanswered questions are just beginning. And then, there are Glebsky’s fellow guests, who he views as irritants.

There’s a traveling salesman named Albert Moses and his gorgeous wife. Mr. Moses is never without a mug in his hand, and though he drinks from it constantly, it always looks full. There’s the famous hypnotist and magician, Du Barnstoker, staying with his adolescent relative Brun—because Glebsky can’t tell the young person’s gender, he refers to the youth as “it”—and there’s Simone, a scientist recovering from a nervous breakdown. Soon, during a snowstorm one night, two new men arrive; one is Hinkus, an enigmatic youth counselor on sick leave, and the other is Olaf Andvarafors, a guy so big and powerful looking, Glebsky calls him a Viking.

With all the major players in place, more oddness ensues—slapstick even; a person or force is apparently moving hotel objects around and making guests’ personal items disappear. It becomes clear, this is the last place Glebsky should have come to find peace and relaxation. The pacing and overall strangeness of everything keeps the reader both intrigued and laughing. As Ursula Le Guin said of the Strugatsky brothers, “One is descended from Gogol and the other from Chekov, but nobody is sure which is which.” 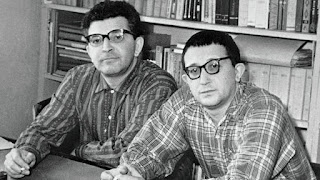 The storytelling in The Dead Mountaineer’s Inn is fast-paced, hilarious, and filled with character detail, and the build-up to the inevitable murder is as entertaining as the investigation afterwards. Of all the puzzling happenings, Glebsky thinks, “Damn, I can’t figure it out…Not enough experience. I’m not Hercule Poirot…”

Maybe not, but for a police inspector who describes himself more than once as a mere bureaucrat, he does like to engage in what his by the book superiors back in the city would have to consider unusual speculations. While drinking port, he and Snevar discuss a number of questions that vary in the broadness of their scope:

Is mankind doomed to extinction (Yes, doomed, but we won’t be around when it happens). Is there a force in nature that the human mind cannot fathom (Yes, there is, but we’ll never know anything about it); Is Lel the St. Bernard capable of sentient thought (Yes, he is, though convincing scientific dolts of this is impossible); Is the universe in danger of succumbing to so-called “heat death” (No, it is not in danger, due to the existence of perpetual motion machines of both the first and second type in the owner’s barn); Was Brun a boy or a girl (Here I was unable to come to any conclusion, but the owner put forward the odd idea that Brun was a zombie, that is, a sexless creature animated by magic)…

Besides showing us that Glebsky isn’t as mundane in his thinking as he might have us believe, this passage balances tones in a way the Strugatsky brothers excel at. The Dead Mountaineer's Inn continually alternates in presenting what you might call metaphysical questions with absurdly inane ones.

A funny scene in which Glebsky is waiting in line with the other guests to take a shower captures this. The guests bicker, argue, and question each other, all the while trying to figure out who is in the common shower singing and mumbling. If everyone thought to be in the hotel is in view, who could be behind the closed door, washing himself? Is it the ghost of the dead mountaineer? Meanwhile, as they wait in line to use the shower, Du Barnstoker entertains them “with the multiplication and division of multidigit numbers.”

The mysteries inside the inn multiply until the worst happens. Olaf Andvarafors is found murdered in his room. The Viking’s door is locked from the inside, and though the window is open, no footprints are found on the sill or in the snow anywhere near it. The huge guy is lying on the floor face down, but his head is “turned one hundred eighty degrees in a brutal and unnatural fashion,” so that his face is turned toward the ceiling.

A locked room, an impossible crime, intimations of something at work beyond the natural—the Strugatskys give us a scenario that mysteries have mined since their beginning. Poe used it in “The Murders in the Rue Morgue,” Conan Doyle in “The Adventure of the Speckled Band.” Countless others have used it since.

Mystery readers derive pleasure wondering how the writer will explain the inexplicable away, knowing that following the genre’s traditions, “All supernatural or preternatural agencies are ruled out as a matter of course,” as priest and detective story writer Ronald Knox famously wrote in his “10 Commandments of Detective Fiction.” The thing is, with The Dead Mountaineer's Inn—considering the science fiction background of its creators, that the novel up to the murder has been so irreverent, and that the book is subtitled One More Last Rite for the Detective Genre—the reader does wonder whether the Strugatskys will stick to the conventional rules.

His vacation ruined, Glebsky decides to investigate. No help will be coming from outside for a while because an avalanche in Bottleneck Pass has sealed the inn off. As others tell Glebsky that the victim, as well as some of the guests, may not even be human, he feels that he is getting out of his depth. He does have a philosophical streak, but the case is extending beyond his mental scope. Snevar knows this and tells him he has to expand his way of thinking:

…the only thing I feel, Peter, is that you’re going about this all wrong. You’re following the most natural roads, and for that reason you’ve ended up in particularly unnatural places. You’re exploring alibis, gathering clues, looking for motives. But it seems to me that, in this particular case the usual terms of your art have lost their meaning…

But what is a twenty-year veteran of the bureaucratic machinery to do? As he says, “I’m just a police officer. I don’t have the clearance to carry on conversations with ghouls and aliens.” That is, if the solution to the mystery lies in the realm of ghouls and aliens?

A great thing about this novel is that it starts weird and develops into something even weirder after the murder—and yet ambiguity remains. At the conclusion, Glebsky himself cannot be sure what happened, cannot settle on a definitive interpretation of the events he lived through.

After the avalanche snow is cleared, the police he called arrive and comb over everything at the inn. There are reports and commissions; whatever may have happened, however odd and potentially dramatic for the human race, the bureaucracy rolls on.

Still, Glebsky is not that much of a functionary. In the case’s aftermath, he never is able to come to terms with how Simone, the scientist, came to regard him with contempt. Simone is convinced that Glebsky misread everything, with tragic consequences, and a part of Glebsky can’t shake the thought that maybe, just maybe, the scientist is right.

Was he, police inspector Glebsky, too small-minded to see the big picture? Should he at least have tried a different approach when examining the unfamiliar phenomena facing him? It’s possible he was, and remains, too narrow in his thinking, and in the end, after all the high jinks and laughs they give the reader, the Strugatsky Brothers leave us with a sense of Glebsky’s frustration.

A last rite for the detective genre? Sort of. There’s no affirmation of the powers of ratiocination here. The only thing to triumph is the idea of indeterminacy.

Posted by scott adlerberg at 9:05 AM