By Jerry Bloomfield
Hello, everybody. And thanks to Steve Weddle for giving me a chance to do this. Some of you may know or maybe seen my name. I’m Jerry Bloomfield, originally from Kentucky now living on the east coast of Canada. I come from one land of storytellers and now live in a different one and it’s something I have been doing myself for about as long as I can remember.

And having those stories published for ten years now. Which is amazing to me. Growing up scribbling in notebooks then filling floppy disks, somehow, I never quite thought other people would read my stuff or even want to. I knew what an author was, of course, saw the names on the books, the little bio in the back, but that I could do that, be that? It just never quite occurred to me. And now here we are, ten years since I was first published, since someone other than me read something I wrote and thought other people would want to as well. Ten years of improvement, each story better than the last, each one letting me stretch and learn.

Home Is… and Other Stories is a collection of those years, that early stuff put out just as it was originally published, an author’s career up to the present day. Stories that come from a lifetime of hearing and reading stories from every type, and, when it comes to fishing, even creative nonfiction. These are stories that range from a weird Wild West to intergalactic bounty hunters and people on earth just doing the best they can. Stories that will make you cry, make you think, and maybe change your view of the world. From a man who lost everything, including his compassion, to a young man who discovered that sometimes the friends that really have your back are the ones you least expect. That charming boat captain who will drop you without a thought if the price is right.

"Home Is…," the title story of the collection, is a story I’m really proud of, for a number of reasons. We all know the hate that LGBTQ+ people around the world are subjected to, and its also something that I’m particularly sensitive to as a queer man from Kentucky. And the way it can hits when its your own family, can be a particular kind of hell. This story is one response to that. The whole thing started with the idea ‘they say you can’t go home again. But sometimes you have to.’ And so I had to find out why. Protecting people, reaching out to help, those are pretty damn good reasons. What happens when people can’t be who they are? Who have to hide parts of themselves from even family? And what happens when they see that pattern starting all over again? It can get better, but we have to make it happen.

The good ol' crime stuff is here too. "Rum Runners" is a gangster/bootlegger story, drawn partly from the Maritime region of Canada I now live in and a long time love for mobster stories. "Stray Bullet" asks what happens when you take everything away from a man and nobody cares? Are you one of the browncoats still mad that Firefly was cancelled? Take a look at "Bounty."

You can find it on the kindle machines here and if you prefer, you can get the PDF over at Ko-fi to read on your favourite device. All my thanks to those who have already bought it and to those who may, and I hope everyone enjoyed the trip as much as I did. 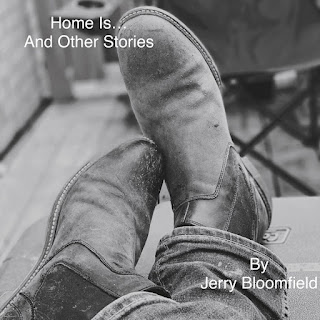 Get yours
Posted by Steve Weddle at 6:16 AM