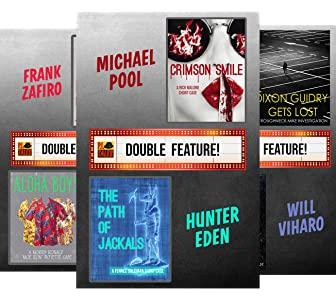 Each Double Feature release contains two classic but quick detective mystery novellas. These volumes can be read in one sitting and there is no skimping on thrill or detail. With three titles to choose from the series has a little something for everyone.

In Michael Pool's Crimson Smile, private investigator Rick Malone has seen his share of marriages gone bad. When a wealthy Denver socialite stands accused of murdering her husband, Rick is called in to run an investigation into her claims of self-defense. But his client's needs soon diverge from the facts, and those facts have the power to end more than just Malone's career, they could also end his life.

In Hunter Eden's The Path of Jackals, former war correspondent Fennec Suleiman lives and works as a private detective in Egypt. When a fame-obsessed American teenager goes missing in Cairo, Fennec is called in by the girl's superficial parents to find her. The investigation soon takes him to Cairo's darkest corners, though none darker than his internal struggle to balance reality against the visions of Anubis that constantly plague him. Can Fennec find the girl before she discovers the true price of fame?

In Frank Zafiro's Hallmarks of the Job, Meticulous private investigator Stanley Melvin likes to keep his work grounded in reality, not at all like the classic detective novels he has read incessantly since childhood. But his best friend and annoying neighbor Rudy quickly points out that his routine "cheater" case is rapidly taking on all of the features that Stanley steadfastly insists are mere fictional tropes of the genre.

In Michael Bracken's Aloha Boys, Private investigator Morris Ronald “Moe Ron” Boyette is still adjusting to his new digs above Millie’s Tattoos and Piercings when a homeless woman hires him to find her missing half-brother. Searching for the young man sends Boyette through the depraved underbelly of the local university, reunites him with a mob boss best left in his past, and leads him to question everything he thought he knew about families.

Dixon Guidry Gets Lost / All Souls Are Final: A P.I. Tales Double Feature

In William Dylan Powell's Dixon Guidry Gets Lost, Dixon Guidry trudged to a Deer Park refinery with his beat-up lunchbox every day for twenty years. Every day but his last day on the job, that is. With few friends, no family, and no clue as to why he disappeared, Guidry seems to have gone up in smoke. And as his Happy Retirement sheet cake sits uneaten in the office refrigerator, his former employer is desperate to uncover Guidry’s whereabouts. That’s where oilfield-worker-turned-private investigator Roughneck Mike comes in.

In Will Viharo's All Souls Are Final, a long-buried memory resurfaces in retired private eye Vic Valentine’s tormented psyche, forcing him to reckon with a pivotal event in his past while recovering from a psychotic break in his present. Most of the action revolves around his erotic, erratic experiences with a secret satanic pornography cult in turn-of-the- twentieth-century Los Angeles, as he is seduced into a decadent den of delirious danger by a sexy client whose mysterious boyfriend Vic accidentally killed. Or did he? Discover the shocking truth in a sordid series of twists and turns down this rocky road to raunchy ruin.