Daring to Dream with Marc Bernardin 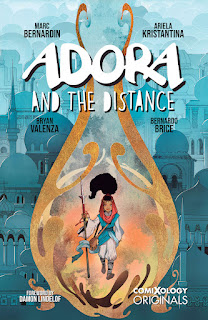 A cool thing happened this week: a writer lived out a dream.

Marc Bernardin—writer, TV producer, journalist, co-host of the Fatman Beyond podcast with Kevin Smith—was a guest on the Late Night with Seth Meyers. Marc was there to talk about and promote his graphic novel, Adora and the Distance. As the father of an autistic daughter, he was encouraged to write about his experiences of raising an autistic child but, as Marc says in the interview, he was the least interesting person in the story.

So he created a version of a story in which there was a young woman of color who was on a quest and what she discovered about the world and herself at the end of the quest. Naturally, he edged toward the comic book format and bided his time. Finally, last year, the graphic novel was published on Comixology featuring the whimsical illustrations of Ariela Kristantina. Now, the book is in hard copy to buy at your local comic book store.

I’ve listened to Marc talk about this story for a long time so I was simply happy for him to get the book out into the world. But then he started to dream. What would it be like to go on a late night talk show and and talk about the book. Seth Meyers is a comic book fan so Marc set his sights on landing a spot on Seth’s show.

To make the dream possible, he encouraged a social media campaign, and, lo and behold, it worked. Marc was on the 19 April 2022 episode of Late Night. Here’s the link of the full interview.

An avid communicator through Twitter, Marc thanked his fans in a very Marc way. 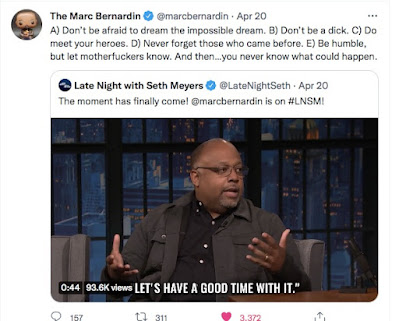 In his deep dives into story and story structure on his podcast, I am often pausing long enough to transcribe things he said into my very own “Marc on Writing” file. Well, here’s another one to add to the list.

Five seemingly simple phrases that can take you far in life. But looks at the first: Don’t be afraid to dream the impossible dream. If you have a dream, go for it.

This brings me back to a quote of Goethe’s as cited in Steven Pressfield’s The War of Art which I reviewed last week: “I [Steven] have learned a deep respect for one of Goethe’s couplets: “Whatever you can do, or dream you can, begin it. Boldness has genius, magic, and power in it. Begin it now.”

Dreams come true. We witnessed one this week, and it was exhilarating. I grinned from ear to ear watching Marc on Seth’s show. I enjoyed seeing him live his dream.

And I also turned my attention to my own. I’m dreaming my dreams and I’ve already begun to put them on the map of my life. Why is that important? Well, let’s let Marc Bernardin have the last word today.