Everything good has to come to an end, and so it is with Gomorrah, which I wrapped up watching a few days ago. Earlier this year, I'd left off at the end of season four, and with the fifth and final season having recently come on HBO Max, I finally watched The Immortal, the film that acts as both prequel and sequel to season four, and the concluding ten episodes. 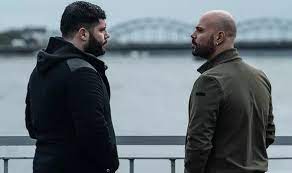 The final showdown between Ciro di Marzio and Gennaro Savastano is what season five essentially is, and it unfolds with the same impeccable pacing, tension, and clarity as the previous seasons. As early as season one, it became clear that the show has as a subtext the friction between workers and management, with Ciro being a leader on the worker side and the Savastano family being management. Season five goes all in on this, with Ciro, within the world he inhabits, being a man of the people, and Genny, despite his insecurities, the feared boss. Genny rules his group in a heavy-handed way from the top down, his own lieutenants talking dismissively about him behind his back, eager to take him down if they get the opportunity; Ciro's group has a vibe of fraternity and comradery. Genny often wears dressy jackets; Ciro nearly always has on his everyman's hoodie and sweatshirts. Despite taking up residence in the huge housing project that is at the show's center, Genny lives surrounded by plushness and expensive items; Ciro owns nothing but what he carries in a single duffel bag. Ciro actually says at one point that he is the same as he ever was, and this is true; he's a character who remains interesting even though he doesn't change in any substantive way from the first episode of the first season to the last episode of the last season. And that this conflict between Genny and Ciro has a class dimension: Ciro states that his aim is not only to avenge himself on Genny by killing him, but to get Genny to kneel in humiliation before everyone Ciro's leading and admit that he, Genny, and his family, the Savastanos, are finished. How this plays out, granting that everyone we're discussing is a drug dealer/murderer, is very satisfying.


One last thing. Like most gangster dramas, this show is one that has way more male characters than female characters. Most of the interplay in the series is among men. But in a way that's been organic, not forced or artificial, it has made its female characters both integral to the goings-on and extremely memorable. Not to mention as ruthless and cunning and iron-willed as the men portrayed. A quick list: Immacolata Savastano, Genny's mother; Annalisa, local drug dealer who figures prominently in seasons two and three; Azzura, Genny's wife; and of course, Patrizia, who starts low and rises quite high and who I found to be one of the most compelling characters in the whole series. In season five, two new women characters appear, and they command attention as well: Nunzia, the ice-cold, black-clad widow who forms an alliance with Ciro against Genny, and the Lady Macbeth-like Donna Luciana, ferociously intent on climbing the ladder of power. As much care went into the creation of these characters as into the male characters, that's obvious, and the results show. 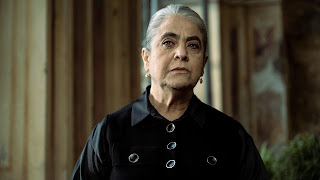 Five seasons of the best kind of viewing pleasure -- that's what Gomorrah brought me at least. The intensely focused storytelling, the music, the visual beauty, all those somehow mesmerizing shots of cars and motos on the move, the way the episodes wrap up not so much with a cliffhanger as with a striking resolution to a chapter (and we hear that familiar musical cue telling us the episode is about to end), and through it all, not a single whiff, not one, of sentimentality.


I'll be hard-pressed to find another crime show that hits my viewing sweet spot as precisely as this one did, but I'll try.
Posted by scott adlerberg at 8:37 AM

What I enjoyed (in a way, I don't know if the word "enjoyed" is the right word to use) about Gomorrah was how the creators were fearless in what they depicted. They were not afraid to go anywhere in their storytelling.

I'm not saying I relish graphic depictions, but the refreshing thing about this show was when watching it the viewer really was unable to predict what was going to happen, which is too often found in conventional storytelling.