Based on my previous week of film and limited series viewing, I suppose you could call Hitchcock's Vertigo and his Rear Window as influential as any movies ever made.  Which, as any film person knows, is hardly news to anyone.  Last week over several evenings, after work and while having dinner, I watched the eight-episode The Woman in the House Across the Street from the Girl in the Window, and over the weekend, I watched the new Steven Soderbergh film, Kimi.  These are two entirely different type works, one an extended deadpan parody, the other an 89-minute thriller of sorts, but in each, crippling neuroses, acute phobias, are the order of the day, as Kristen Bell and Zoe Kravitz have to negotiate the dangers and deceptions they push themselves into once they leave the safety of their well-appointed living spaces. 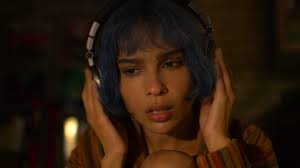 With The Woman in the House I didn't have high hopes and wasn't even planning to watch it, since I figured it would be an over-the-top, exaggerated send-up of domestic thrillers and psychological mysteries, and that style of parody has been done to death over the years.  But no, as I read from a review or two, the series charts a very deadpan tone.  And I suppose it's this tone, which sometimes does veer into utter absurdity while the series still works in its way as an actual mystery/domestic thriller. that has led to the mixed reactions.  The standard central character for these type of similiarly-named thrillers is put through a ridiculous wringer, though without eye-rolling or winks at the viewer.  Ludacris would describe both the way the main character, Anna, lost her child and Anna's relationship, as it's ultimately revealed, with her husband.  The condition she suffers from, ombrophobia, fear of the rain, is, yes, somewhat played for laughs.  That a person with a serious drinking problem who does no exercise is in impeccable physical shape, that, of course, she lives in an immaculate and lovely house though we never see her or anyone else doing much work to maintain it, that she can't trust her own perceptions and nobody else does either -- all this is par for the course...and fun is had with all of it.  And why shouldn't it be?  Any time a form within a certain genre becomes ultra-popular, not to mention quite mannered in its execution, it is prime fodder for parody.  I remember laughing at Neil Simon's Murder by Death just as I did at Carl Reiner and Steve Martin's Dead Men Don't Wear Plaid, where Agatha Christie and hardboiled PI stories were put through the grinder.  One could make a long list of films and shows that have taken an irreverent attitude towards both classic whodunnits and noir.  Now it's the domestic thriller's turn.  The Woman in the House Across the Street from the Girl in the Window delivers its satire with a straight face (and it has a great climactic scene, a bit startling and very funny), with Kristen Bell and the rest of the cast carrying the tone off perfectly. I enjoyed the series and how they did it. 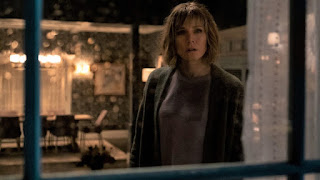 Kimi's a more serious thriller (as in not a parody of one), but it maintains a lightness of tone throughout its running time as well.  It's Soderbergh working with his usual stylishness and energy and looseness.  And the script, it should be said, is yet another sharp and nifty one from David Koepp.  Here the main character, Angela, has a dread of leaving her apartment at all, and there is much staring through the windows at that forbidding place called the outside world.  Besides the Hitchcockian qualities, it taps into the paranoia vibe of The Conversation and Blow Out and films of that ilk.  It touches on Soderbergh's abiding preoccupation with the corrupting force of money and has a quick but pointed demonstration scene that can't help but make you think, "Yes, people power!"

But what I loved also is how it's set in the here and now, with an actual acknowledgment of Covid and masks.  It's all recent, I know, the pandemic behaviors and adaptations, but to see so many shows and movies that are supposed to be contemporary just ignore the pandemic has gotten on my nerves a bit. How can you ignore two years and counting of a period that has affected nearly everyone's life?  Anyway, I assume that at some point, films and TV will get around to grappling with this period.  So far though, other than Bosch, which ends just as Covid is starting, and The Morning Show of all things, which in season two features the pandemic as a main part of its plot, I've seen virtually nothing fictional that touches on the last couple of years.  But Kimi does, in the natural course of its story, and makes the isolated life Angela leads due to her condition a life that is only slightly more sequestered than the life so many of us led during the height of the pandemic.

Technology for company? Check.  Exercise at home on a machine? Check.  Countless virtual interactions and not much physical contact with people? Check. That, at least until she's compelled to leave the house, is Angela's life. Seems recognizable to me.

Posted by scott adlerberg at 8:27 AM

I read about Kimi a bit and already planned to catch, but hadn't heard at all (completely out of the loop?) about The Woman in the House, etc. Thanks for the thoughtful reviews and recommendations here!