I was poking through my bookshelves the other day looking for a particular novel, when I came across a book I haven't thought about for a long time but which I remember enjoying.  It's the Mexican novel The Dead Girls (Las Muertas), by Jorge Ibarguengoitia.  I read it years ago, when it came out in the US as part of that great Avon Bard line of Latin American fiction that you could find on bookstore shelves here in the 1970s and 80s. 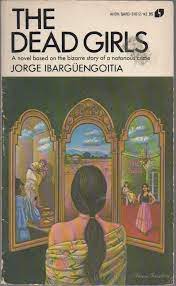 First published in Mexico in 1977, the novel is loosely based on a real Mexican murder case.  Two sisters named Delfina and Maria de Jesus Gonzalez, who had run a brothel, were arrested and put on trial in 1964 after the bodies of eighty women, eleven men, and a number of foetuses were found buried on their property.  At their trial, it came out that young women lured to work at the sisters' brothel by ads for housemaids had been killed if they became sick or their looks faded.  Male clients who had lots of money on them were murdered.  One doesn't have to use much imagination to figure out where the foetuses figured in.  The sisters were found guilty and sentenced to forty years each in prison.

Sounds grim, but the novel itself, believe it or not, is a comic one. Blackly comic, but comic nonetheless.  It reduces the number of victims to six, all women, though six is plenty, and it achieves a distance from the horror of the actual events by presenting its narration through police interviews and reports.  The telling is dry and deadpan in a way that becomes a parody of crime reporting, a use of language at once revealing but also inadequate for what is being described.  It's that official, investigative language we've all become so accustomed to hearing, and  Ibarguengoitia uses it to wonderfully disorienting and ambiguous effect.

I won't say much more other than that the individual crimes open up to a society populated by not just murderous madams and their victims, but also by corrupt soldiers and corrupt politicians and reporters of dubious moral fiber, a world rife with rot.  Sound relevant and topical?  Always.

The old Avon Bard line of Latin American fiction ended years ago, so after I put my old copy of The Dead Girls back on my bookshelf, I wondered whether it is still in print in English.  I found out it is -- nice to see -- from Picador Classic, with an introduction by Colm Toibin no less, and it's also available as an e-book.  With true crime a rage like it's never been, this novel based on a true crime, told in a language that in part mocks true crime tale telling, is a worthy read.

Posted by scott adlerberg at 8:13 AM