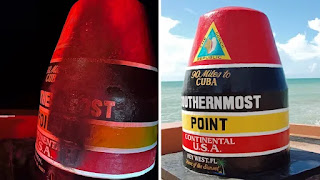 I came upon a great news item this week that was the perfect example of several things.

A fantastic story, complete with villains and heroes.

Two Key West tourists in their early twenties rang in the New Year by setting fire to a buoy in the early hours of Jan. 1. It wasn’t just any buoy—it was the Southernmost Point Buoy and it marks the southernmost point in the continental United States.

So the residents of Key West were understandably pissed off about it. Security camera footage of the two vandals in the act circulated throughout the small community of people who live in Key West, many of whom hustle at multiple jobs just to make ends meet on the expensive island. One of those was a bartender named Cameron Briody. He recognized the two men; he’d served them on New Year’s Eve. But he must have served throngs of people that night, right? So, out of dozens and dozens of inebriated patrons, why did he remember them specifically?

They didn’t leave a tip.

Nobody else, that’s who. Those two were the only people that night who didn’t, Briody told police, according to the New York Times.

Once he recognized the men in the buoy video, Briody and his boss at the bar Irish Kevin’s went to their own security camera footage. They spotted the two moving around the bar and matched the times they bought drinks with the times recorded on that night’s receipts. And lo and behold, the two had paid with credit cards. Irish Kevin’s turned the names over to authorities.

According to police reports, the two confessed. Whether they end up serving jail time will be up to local prosecutors.

Like many others, I assume, I read this story with delight. The buoy wasn’t permanently damaged, the vandals will face consequences, and a stiffed bartender won a victory for food service workers everywhere.

As with all good stories, this one has a moral. Actually, for our purposes here at Do Some Damage, it has two:

1. Sometimes the best stories are true.