It's a rare kind of mystery story, whether a novel or a short tale, that is a blood-soaked puzzle, with a good deal of death involved, and with a tragic ending, that is essentially crimeless.  By crimeless, I mean that no human being does purposeful harm to another human being in any way, shape, or form.  Harm does come to animals in this story, and it's a harm that is effected on the creatures in a way that is in no way pretty, yet the motivation behind the hurt inflicted on them springs, believe it or not, from a poignant and loving place in a particular human being.

I'm talking about a short story I recently read called "The Mourning Locomotive". It's from a collection of mystery stories called The Ginza Ghost by Japanese writer Keikichi Osaka, an author who wrote fair play impossible crime stories in the 1930s and 40s.  He was held in high esteem by his fellow mystery writers in Japan when he was alive (he died young, aged 33, in 1945, under the harsh conditions in Japan as the war came to a close), fell into near oblivion for decades, and then was rediscovered in the 70s and 80s by a new generation of Japanese mystery readers and writers. 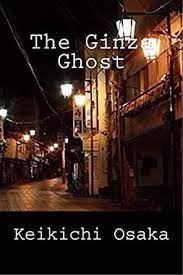 Here's a summary of the story from the collection's introduction:

In "The Mourning Locomotive" (1934), we are introduced to the workers in a railway locomotive depot.  Cleaning away the remains after a deadly accident is just part of the daily routine for these people but even they are surprised when one pig after another gets run over.  And it's always the same locomotive and the same operators which are involved.  Meanwhile, we are introduced to a mysterious girl in a shop in a nearby town who is always looking outside through one of the windows...The ending of the story is truly tragic and explains how this harrowing and puzzling case is due to the indescribable feelings of human beings."

This entire collection, consisting of the author's best tales apparently, is a very good one, but "The Mourning Locomotive" stands out.  It is gory, gruesome, and baffling, and in the end, quite moving.  It also is one of those stories that gives you an idea of what can be done with a mystery in innovative hands, and I love that kind of reading experience.  It's enjoyable for its own sake and gives you ideas for what perhaps you might be able to pull off in your own writing.

Posted by scott adlerberg at 7:48 AM