This year, I hit a new threshold: I got to 70,063 words in the thirty days of November. That came out to 40.2 hours. Irritatingly, those 70,000 words are not the end of the story, so I kept going. But I allowed myself a new daily goal for December: 1,000 words per day. It’s not quite the benchmark of 1,667 but it’s manageable. It’s helpful, too. I ran into a story wall on Thursday and I needed to brainstorm. It ate up the new words, but I cleared the pathway for the rest of the book (and might’ve even discovered a penultimate scene).

Like I said last week, whatever you did, please celebrate your accomplishment. I know that the physical part of writing is literally sitting in a chair and moving your fingers over the keyboard, but it can take a lot out of you. So no matter if you got to 50K or didn’t, celebrate.

Well, as I wrote last week, if you want to be a writer, you have to keep writing. Find a new monthly challenge and get a story written. Write a short story per month in 2022. Just keep writing.

But what if you want to publish this NaNoWriMo 2021 book? Author J. Todd Scott on Twitter mentioned this week that his first book was written as part of NaNoWriMo.

What about the book you just completed? Well, do you want to publish it? If so, you can do what I did and publish it an an indie author. Yes, it means you do everything, but you also control everything. You rise or fall based on what you do. It can be daunting, but also rewarding.

First thing, get it edited. Ideally, you’d hire a professional editor, preferably one that doesn’t know you for a completely unbiased review of your book. When you get those changes back, make the changes. You don’t have to make them all. I mean if the editor is telling you the sub-plot needs a complete overhaul, consider why the editor said that, and then make your informed decision. There’s a reason the editor made the comment, but it doesn’t mean the editor is 100% correct. When you’ve made those change, re-read your book and then spot the things you missed.

Get a cover. Unless you know graphic design, hire someone. I used 99Designs to get some of my covers created.

Write a book description. Create your metadata. Determine the price point. Determine your marketing strategy. Format your file. (For this, the company Draft2Digital is recommended because they’ll basically do all the formatting you need for any of the digital marketplaces.) Upload the file to the world.

Then celebrate your accomplishment by throwing yourself a party.

And then? Well, do it all again.

In 2017, Nick Kolakowski began his Love and Bullets trilogy with the novella called A Brutal Bunch of Heartbroken Saps.  Shotgun Honey put it out.  The book did pretty well for Nick, and that encouraging development helped lead him to write the follow-ups, Slaughterhouse Blues (2018) and Main Bad Guy (2019).  In this spot, I reviewed Heartbroken Saps when it came out and later Slaughterhouse Blues. I didn't review but thoroughly enjoyed Main Bad Guy when that appeared, Nick wrapping up the saga with more imaginative mayhem and continuing to use the novellas not only as vehicles for pulpy crime fiction but also to score satirical points about any number of things.  Slaughterhouse Blues, to cite one example, has a great extended gag about electric vehicles, and in Main Bad Guy gentrification in the New York City borough of Queens is the target for some not so gentle gibes.  Nick ends Main Bad Guy in a satisfying way, and yet here we are in 2021 with another Love and Bullets book, which is in fact the three novellas back to back mixed in with new material.  How did this come about? 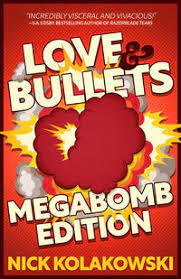 In his introduction to the expanded volume, Nick explains:

"By that point [the writing of Main Bad Guy], the trilogy had sold in Europe, so I had to stitch the three novellas together into a single work, titled -- you guessed it -- Love and Bullets.  Then Shotgun Honey wanted to release a single volume in the U.S., and here we are."

Here indeed.  Nick had the rare opportunity to go back and tinker with something previously published, and he took that opportunity to resurrect a character who, to all evidence, died in the first book.  He doesn't resort to gimmicks, I must say, or to some ridiculous (it was only a dream) re-plotting, but actually exploits an opening from Heartbroken Saps to change a character's fate.  We never actually were told outright that the character in question perished.

So an intriguing character gets unexpected page time in the Megabomb edition, his own adventures folded into what is taking place in the hectic lives of Bill and Fiona.  There's no question that Nick likes this character (why else would he have brought him back?), and he gets the chance to give this person what you might call a second chance, or a shot at something akin to, if not exactly, redemption.

Is the new material essential?  I wouldn't say that.  And anyhow, that would imply that the original trilogy was lacking something needed for a sense of completion.  The trio of novellas do not need that.  They are quite complete as is, thank you.  But the bloody adventures for the person back from near-death are entertaining in and of themselves and do give an extra resonance to things.  These additions are not without risk either.  The shakiest aspect of A Brutal Bunch of Heartbroken Saps is how it switches, without a feeling of necessity, between its third-person narration for the Bill and Fiona parts and its first-person narration for other parts.  Slaughterhouse Blues and Main Bad Guy, without the first-person narrator character in them, jettison these point of view changes, making the books more cohesive than their predecessor.  With the Megabomb edition, Nick extends the first-person segments beyond the first novella, and here he does take the risk of splintering his narrative and slowing down the story's momentum.  When everything was so tightly put together before, won't the insertions throw the previous structures out of whack?

The answer, in brief, is a little bit, but the tone of the added sections is so of a piece with the original material (despite the point of view switches) that nothing comes across as extraneous.  With the rapid pacing and the chapter cliffhangers, you speed through the chapters old and new alike. Nick's wit and sarcasm and biting commentary remain strong, and his inventiveness with action, with violence, with scenes blending humor and human exsanguination, never flags.  In total, including the trilogy, I've read six of Nick's books now, and I can only marvel at how he keeps coming up with entertaining ways to depict human beings in absurd and absurdly violent situations.  When it comes to carnage, he has a fecund imagination, but as I've said about him before, he doesn't forget that emotion is key no matter how much craziness goes on and that if you don't care about somebody in a story, all the action in the world won't save it.  The Love and Bullets trilogy was highly enjoyable as three separate novellas and it's lost none of its zest as a single, thicker edition.

Get the expanded edition if you haven't read the books already. Get it if you read the novellas before and want to zip through them again while following some smile-inducing, bonus shenanigans.  Not everyone can mix love and bullets on the page effectively, but Nick Kolakowski is a writer who does.

You can get Love and Bullets: The Megabomb Edition here.

Hugh Lessig has been a part of RVA City Writers for several years and he came to us with a lot of experience. He spent more than 30 years as a newspaper reporter, primarily covering politics and the military. He’s spent time with doctors in Ecuador, earthquake victims in Haiti and fellow journalists in Ukraine, but his best memories are the quirky and sometimes questionable characters he’s met closer to home.

Now, Lessig has turned his way with words toward the field of fiction. His short stories have appeared in Thuglit, Shotgun Honey, Needle: A Magazine of Noir and Crime Factory.

More recently, his story “Last Exit Before Toll” was included in Mickey Finn Noir, Volume 1, released last year from Down & Out Books.

This year, he was part of the Guns + Tacos series of stories, also from Down & Out, and next month, Mickey Finn Volume II will be released and include his story “Confessions on a Train from Kyiv.”

He’s currently working on a novel about an aging thug battling Alzheimer’s and the crime boss who abandoned him.
We are pleased to welcome Hugh to the Flash Challenge. What is the challenge? Write a fifty-word flash. That’s it. However, the story must incorporate three randomly selected words and revolve around a single, overall theme. The words have been drawn and shared; letter, afford, and yard. The theme is despair.

Bad dog
By Hugh Lessig
Digging in the yard, Butterbean tears off Joe’s finger and parades up the street, wagging his tail.

After Joe’s drunken rant, everyone cried over my broken arm. I couldn’t afford a hit man or dig a decent grave, but my neighbors won’t care about the letter of the law.

Posted by Marietta Miles at 7:24 AM No comments: