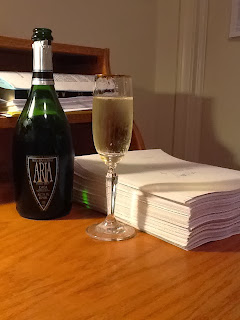 Well, I did it again.

Now, for someone like me--who wants to write books for sale--to celebrate the ending of another book may seem odd. Well, it might be at this stage in my career, but you have to know where I've been to appreciate where I am now. You see, it took me 2,556 days (from 1 June 2006 to 31 July 2013) to write "The End" on my first and second novels. Between novels two and three, it only took me 72 days. Actually, there was a 73rd day in there, but it was a day in which I didn't write on the novel but finished a short story for publication. Just 72 day and I have another book under my belt. Seriously. Somebody pinch me.

This third book is a pseudo sequel to my second. Book 2 features a PI character and what happens to her as she works her first solo case. She works for  a PI firm and her boss is a co-star in Book 2. Book 3, on the other hand, features her boss and the things he has to go through. My lead from Book 2 shows up as do some of the other co-stars from Book 2. I have this idea of writing a series of novels in which different characters take turns leading a mystery story. We'll see how it goes.

Why This One Is Special


This third book of my career is a special, but frustrating accomplishment. It was frustrating because of my lesson learned (see below). Book 3 was special for a few reasons. One, I started it the day after I finished Book 2. I figured the secret of success is constantly working so I didn't want to take a day off. So, I didn't. Two, this book was almost literally written from scratch. With Book 2, I had about 13,000 written from last year. I just added 93,000 more this summer. With Book 3, I had a chapter I removed from Book 2 as a starting point and that was it. I wrote 115,000 new words on a project that I had barely conceived of in January and took out of my second book as a needless subplot.

Believe me, I know how this sounds. "Hey, world, I wrote a book using my imagination from beginning to end." Yes, that's what we're supposed to do. But I had only done it twice before, with years in between. One of the main reasons I jumped into Book 3 with no break is that I wanted to make sure the lovely experience with the second book wasn't a fluke. Apparently, it isn't.


In short, know your ending. I'm not necessarily saying know your ending before you start. Sometimes you won't. But somewhere along the way--halfway, three quarters, three fifths, whatever--it would be a good idea to know where and how your book is to end. I thought I knew because it was the event I had foreseen. In reality, my ending was really an epilogue. I needed the ending of the story and I had the devil of a time finding it. In fact, I wanted to be done by 1 October, but I had to find my ending. It took me twelve extra days. That bummed me out a little, but I rolled with it and found my ending.

So, next time I write a book, I will at least be in the ballpark with a possible ending. It will make the writing so much easier.


As most of y'all know, I started writing everyday since Memorial Day. When I finished Book 3, it was Day 138. The big question was do I intentionally stop the streak just because or maintain it. I am a monogamous writer. I write and think about only one story at a time (but that's changing, as evidenced by this past week; stay tuned for more on this). When I completed my novel last Saturday morning, I was in a quandary: what to write next? I wanted to return to another PI character, this one set in World War II, but I had no story. I gave myself the rest of Saturday off and I started conceiving the plot of the next story on Sunday. It took me all day to work through the ideas, but I did manage to write the first scene.

Streak intact. And it has been all week long. The one streak I did break was my 1,000 words/day streak that I had maintained since July 4. But, for me, the writing streak is more important. This new story is a tad on the slow side--I've only written 4,000 words in a week--but progress is being made. Sometimes the sophomore effort can be the most difficult.


So, there you have it. Another novel completed, another "THE END" typed. The beauty of this type of business is that I'm already looking forward to doing it again.
Posted by Scott D. Parker at 1:00 AM