Ignore the Scoreboard: A Writing Process

The NFL season kicked off on Thursday of this week, but I was already prepared because of Peter King.

For many years now, a NFL weekend is not complete until I read King’s Monday column. And they are long. Wonderfully so. He covers the weekend’s action, what he’s reading, what beer he likes, tales from the road, and other non-sports pieces as well in a segment he dubs “10 Things I Think I Think.”

On Monday, King commented on a recent article with Nick Saban, the head football coach at Alabama.

“I think I learned something about Nick Saban in his enlightening interview with Alan Blinder of the New York Times. Saban’s a lot more malleable as a coach than I thought. Listen to him about how his approach to coaching has changed:

“The biggest thing that has changed for me — and you might be shocked when I say this — is that I’ve actually become, through the years and through the experiences, a lot less outcome-oriented and a lot more process-oriented. I think that approach carries over to the players because then they become less outcome-oriented, and they’re more focused on process, they’re more focused on one play at a time, exactly what do I have to do and how do I have to do it, what’s going to help me be successful here, and they’re not looking at the scoreboard like we’ve got to win the game. They’re focusing on one play at a time.”

“I think that reminds me so much of what Drew Brees told me a couple of years ago, when I asked him what advice he’d have for your quarterbacks. In effect, Brees said, Ignore the scoreboard. Think about making every play the best it can be. Worrying about the scoreboard distracts from the only thing you can control—the next play. Great advice for football, and for life.”

And great advice for us writers.

The scoreboard for us is when the book is published and some of us might obsess about Amazon reviews or how our book is doing with readers. All things we cannot control and over which we have zero power.

To keep the football analogy going, the next play for us writers could be something as small as the next chapter or as large as the next book. Keep your focus localized to your own work and let the scoreboard take care of itself.

Because every now and then, you’ll fumble the ball and produce a book folk won’t enjoy even if you loved it and poured your heart into it. But at the same time, there will be those days when you publish a story everyone loves and the confetti will cascade down from the rafters.

Be mindful of both moments.
Posted by Scott D. Parker at 1:00 AM No comments:

Beau and the Newspaper Man

This week, Beau takes a look at Burying the Newspaper Man by Curtis Ippolito.

Marcus Kemp is a regular beat cop living a normal life in San Diego, California. Until the day he makes a shocking discovery: a dead body in the trunk of a stolen car. Worse, the victim turns out to be the man who abused him as a child.

Marcus instinctively wants to help the killer get away with murder and, disregarding his police oath, will stop at nothing to make it happen. With both his job and freedom in jeopardy, his investigation leads him to an unexpected killer, and Marcus is soon faced with an impossible decision.

Can he finally bury the past before it drags him under? 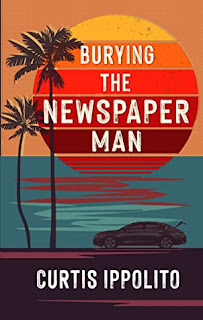 Get some
Posted by Steve Weddle at 6:55 AM No comments:

The Scar and the Nose

Two of the greats departed yesterday, one old, one prematurely. When I heard in the morning that Jean-Paul Belmondo had died, I stopped for a moment to reflect on all the movies he did and the pleasure I've received watching them. Eighty-eight years old, a full life. Of course, I felt differently when I read Michael K. Williams had been found dead, at age 54, in his Brooklyn apartment. In reaction to that news, I just felt, like many, very sad.

One thing I did think of later in the day, though -- how these two had two of the greatest faces you'll ever see in films, crime films or any other type. You've got Belmondo with that famous prominent broken nose and Williams with that big scar down the middle of his forehead. In both cases, the "imperfections" only served to add character to their appearances, a sense of these people being absolutely real.

About Williams as Omar on The Wire. I remember watching the very last episode of the last season, and you just sort of knew that after all his escapes and near-death experiences, Omar was not going to make it through that last show. I was sitting there watching with my wife and both of us were saying, "Wire writers, just spare Omar. Whoever else dies, dies. But just leave us Omar at the end even if it's a little unrealistic and you're doing it just to please the audience." They took the narrative route with Omar that made the most sense dramatically and that almost had to happen to him after all those seasons, but damn, when you like a character so much that you want the writers themselves, in a show like The Wire, to just grant you a wish to please you, you know that actor made that character one you care about so so much. Michael K. Williams, I can only wonder what great roles were ahead you would have played, but what's there for us to watch, Omar and Chalky Wright and Leonard in Hap and Leonard and the Rikers Island inmate in The Night Of and the others, I will continue to watch and love.
Posted by scott adlerberg at 10:26 AM No comments: