It's the Kitten's Fault in Furbidden Fatality by Deborah Blake 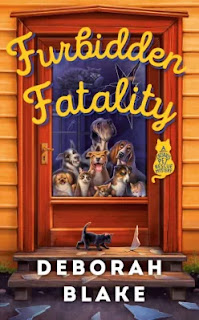 You would think winning the lottery would solve all your problems, but if you've heard real-life stories of lottery winners ruining their lives, then you know money doesn't solve everything. Unless, that is, you have a purpose. Or a mystery to solve.

Kari Stuart, twenty-nine years old, is the lottery winner in question in Furbidden Fatality, the first in a new series by Deborah Blake, and it is the March 2021 selection in Murder by the Book's cozy mystery subscription service. What you don't see on page one is Kari extravagantly spending her money or doing the other things folks flush with new  cash do. Instead, she is driving a small black kitten she found to the local animal shelter. What she finds, however, is a run-down facility with no more room to take in the cute kitten. Turned away and wondering what to do with the cat, Kari impusively buys the shelter, giving her aimless life new focus.

As stories of this type do, we now get to meet all the supporting cast of Lakeview, the town in which she grew up. Suz, her best friend, who often serves as the Greek chorus, throwing reality at Kari at various times in the book, especially at the beginning when she first learns of Kari's purchase of Serenity Sanctuary. Sara Hanover, volunteer at the shelter, is a former English teacher who still knows everyone in town which comes in handy as the book goes on. You’ve got Bryn, a somewhat sulky twentysomething and Daisy, the older former owner.

Into this mix comes Bill Myers, the local dog warden, and the bane of the shelter’s existence. The latest Myers accusation is against a pit bull, Buster, who is accused of biting someone else. Myers is chomping at the bit to confiscate Buster and put him down. Well, good news: he doesn’t do that, mainly because he’s murdered. On the grounds of Serenity Sanctuary.

Guess who’s the number one suspect? You’re right. Kari, who has moved in and took up residence on the property. All the clues point to her. She had the motive (save Buster), the opportunity (her land), and the weapon (Myers was choked with a snare pole). The cops barely look elsewhere, despite additional clues and information along the way, so it’s up to Kari to clear her name (and those of her friends who get pulled into the investigation) while uncovering the real killer.

Blake moves the story along pretty quickly, adding in new wrinkles to the mystery and throwing a false leads along the way. Kari and her friends have a lot of pluck as they basically become detectives despite them not knowing how to really do it. There are a couple of jokes from the police about the reality of detective work versus what is seen on TV. All in all, I didn’t figure out the killer until the end, always the mark of a good book.

I’m early in my enrollment in what I call Cozy College, where I read cozy mysteries, a genre all but brand-new to me. Of the half dozen I’ve read this year (Bait and Witch, Murder at the Beacon Bakeshop, and four Andy Carpenter novels by David Rosenfelt), Forbidden Fatality is the first one written in third person. It doesn’t diminish the book at all, but I kind of have gotten used to a lead character in a cozy being the narrator. Maybe that isn’t the norm, but it was one of the stereotypical things I thought cozies were like—and those earlier books confirmed.

Interestingly, another trope I associate with cozies that involve pets is that the pets themselves help solve the crimes. The Andy Carpenter series has pets (and, ironically, a dog shelter) but they don’t help out. In this novel, Queenie (the black kitten that started the whole thing) actually does. Makes for quite a charming little addition to a fun book. 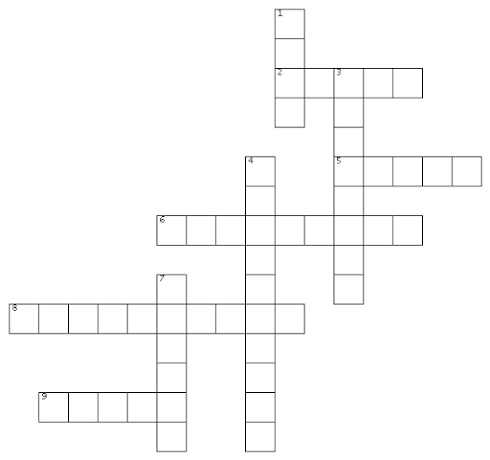 Posted by Steve Weddle at 2:00 AM No comments:

This week, Beau takes a look at the first in a horror novella trilogy -- JUNIPER from Ross Jeffery

Juniper is the first book in Ross Jeffery’s novella trilogy: a post-apocalyptic horror about an insane American town seemingly at the edge of reality. As Juniper suffers from scorching drought and medieval famine, the townsfolk are forced to rely on the ‘new cattle’ for food: monstrous interbred cats kept by the oppressed Janet Lehey.But there’s a problem: Janet’s prized ginger tom, Bucky, has gone missing, flown the coop. As Janet and her deranged ex-con husband Klein intensify their search for the hulking mongrel, Betty Davis, an old woman clinging to survival on the outskirts of Juniper, discovers something large and ginger and lying half-dead by the side of the road.She decides to take it home…Juniper is surreal, dark, funny, and at times: excruciatingly grotesque. Buckle up for a wild ride through the dust-ridden roads of a tiny, half-forgotten American town. 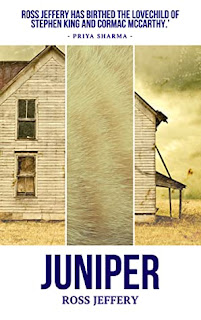 Get yours
Posted by Steve Weddle at 6:56 AM No comments:

Anthony nominations are out 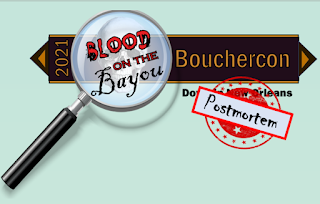 Posted by Steve Weddle at 6:49 AM No comments:

P for Pathology, P for People

Last week on HBO Max, I watched the first two parts of The Mare of Easttown with Kate Winslet.  It's good so far, and when it ended, having to wait a few days till the next episode but still in the mood for a mystery series of some type, I decided to finally watch The Undoing, which premiered last October, also on HBO Max.  The contrast between the working-class, small-town Pennsylvania setting of The Mare of Easttown with the affluent Manhattan milieu of The Undoing was a big one and something of a reminder of why crime stories are so great a lens through which to observe human behavior.  I would hardly call The Undoing a deep dive into human nature, but it does serve as an enjoyable reminder of why crime fiction, so often approached as a form of social fiction, exploring people living in constrained conditions, under economic duress, is equally good at exploring the trials and tribulations of people who don't have to worry about money. 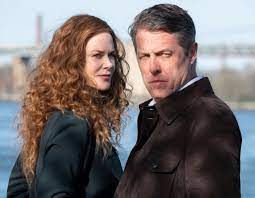 Nicole Kidman, husband Hugh Grant, and their son all live resplendently on Manhattan's East Side, near Central Park, and their son goes to a $50,000 a year private school. All seems right with their lives (too right, perhaps) till a woman of lesser means they know, an Elena Alvez, who lives in East Harlem and whose son goes to that same private school on a scholarship, gets brutally murdered.  The series essentially becomes a "did the husband do it or did he not do it" story.

In Golden Age type crime fiction typically set among the upper class, the crime story is a puzzle and you don't really care about who lives or who dies as you do with characters of great depth.  The Undoing is not that kind of story, and it has a dark shimmery feel with layerings of psychology, but it is a story, I found, that I could watch caring about the characters enough while still enjoying how much their own flaws and secrets lead to the unraveling of their oh so perfect lives.  Who doesn't like to see rich people made to endure hellholes like Riker's Island? Who doesn't crack a smile seeing these people made to take perp walks of humiliation?  You get to vicariously enjoy their wonderful digs but also to see them suffer in those grand surroundings. It's plush and it's satisfying.

Still, there is a bit more. Written by David E. Kelly, The Undoing has enough darkness to make its point that pathology in action is no joke, and the economic circumstances of the people caught up in a person's sickness are no protection.  Kelly presented this even better in Big Little Lies, where real damage and pain rear up in a community you can only call privileged, but it's a good point to make and repetition in a writer is hardly a sin.

How to approach writing about a class of people who don't have genuine material concerns, the worries that nearly everyone else in life faces on a daily basis?  One way is through a crime story, albeit one deeper than The Undoing if you want to make a strong impact.  Pathology is human and happens everywhere, up and down the economic ladder.  Yes, the family with means or the person with wealth can afford the lawyer that the defendant compelled to get a public defender cannot.  The wealthy always have their advantages. But within the group the crime was committed in, those comfortable people, the damage wrought was real and lasting and never to be undone.  The trauma, if that's part of it, will affect a life or lives forever, and the person reading or watching the tale of the rich people truly suffering should be able to relate to those people as they would relate to anyone else on any economic or social level.  Crime is the great leveler but also, in one sense, the great connector.