In this spot back in March, Rock and a Hard Place Magazine co-editor Roger Nokes guest blogged with his piece explaining why the magazine (co-editor Jay Butkowski) was putting out a call for a special themed anthology called Under the Thumb: Stories of Police Oppression.

“I think the main objective of this anthology is to demystify the cop story in crime fiction. We are trying to invert the usual perspective when it comes to a crime story. A deconstruction of the police procedural that examines the world through the eyes of characters who are usually voiceless. We’ve all read a police procedural that uses the suspects as simply props for the story of an officer who 'bends the rules' to get things done. Too often we don’t consider the cost of this kind of indoctrination. Stories are our myths and our myths become our reality. But it's a reality shaped by a worldview that disavows the truth of people from marginalized communities and underrepresented cultures. I like to say writers are liars who seek the truth. That’s what we are doing with this anthology. Seeking the truth. No matter how much it hurts.” 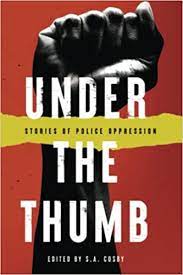 Crime fiction, as ever, is a great vehicle to explore the power disparities of the world and the flaws and problems inherent in the systems of human justice, and I'm eager myself to see how these different writers approach all this.  There should be a lot to dive into.

Proceeds from sales, by the way, go to The New Jersey chapter of Black Lives Matter.

You can get Under the Thumb: Stories of Police Oppression right here.

Posted by scott adlerberg at 7:34 AM