The Insult by Rupert Thomson

Late this summer, a friend of mine and I got together to hang out for a night, and he brought along a book that he said I had to read.  He handed it to me -- The Insult, by Rupert Thomson.  I took the book and did the usual. I looked at the front cover and read the back cover copy, and I read the blurbs on the front and back. 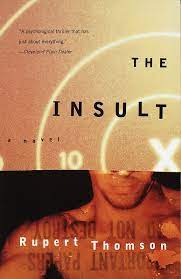 I'd never heard of either the book or the author, but I was intrigued. The book had been published in 1996 and this particular edition was a Vintage Crime/Black Lizard edition. The blurb on the back from Time Out said, "Reads like an unholy collaboration between Oliver Sacks and Edgar Allan Poe".  And the description was interesting: "With this eerie, provocative and original novel, Rupert Thomson takes the psychological thriller into unexplored territory.  Martin Blom is walking toward his car in a supermarket parking lot when a single random bullet pierces his brain.  From that moment he is blind -- his doctor says permanently.  But then one evening Martin discovers what is either a genuine miracle or a delusion suffered occasionally by the newly blind: in the dark, he can see."

My friend, who is very well-read and who happens also to have read my books, described this book as one I "had to read".  He said that when I did, it's the kind of book that might make me jealous.  "It's something you would write," he said.  "I'm telling you. You're going to read this and think it's something, if I came up with a premise like that, I could write."  He added that I should not read up on the book before starting it because the less I knew about the story going in to reading it, the better.

You get book recommendations from friends all the time, and like with movies or music, you judge that recommendation in large part on who is making it.  I had the usual to be read pile of books at my house, and I added The Insult to it, thinking I would get to it eventually.

It took about two a half months for me to get to it.  In the meantime, I read up a little bit about the book. Not enough to learn any plot points, but enough to find out that David Bowie, of all people, in 2018, had listed it as one of his top 100 novels."  Now I don't know much about Bowie's reading taste other than that he read a lot and liked William S. Burroughs, but praise from him certainly didn't diminish the book in my eyes.

So, having now read it, my reactions:

First of all, I don't think I've ever picked up a book where the cover descriptions and even the blurbs are so misleading.  The book's central conceit does revolve around blindness, and the Oliver Sachs comparison isn't entirely off because the novel's main character does suffer a traumatic brain injury that affects his perception.  He may have what is an actual condition called Anton's Syndrome (a blind person adamantly insisting that they can see).  But beyond that, there is nothing from the cover that you could glean that would give you the slightest clue as to the direction this book takes. And that includes the title, which derives from a rare use of the word "insult".  Even the novel being published by Vintage/Black Lizard threw me off because the novel is not a crime novel in any conventional sense.  This is not a Vintage/Black Lizard in the tradition of Jim Thompson or David Goodis or any of the noir writers like that.

So what precisely is The Insult?  It's a novel, I have to say, not quite like any I have ever read. Rupert Thomson writes easy-to-read sentences using plain language, but he has a great gift for description and unusual but incredibly apt metaphors.  He also never, through 406 pages, lets his story flag. The narrative moves forward briskly at all times, told by a first-person narrator, Blom, the man made blind by a random bullet.  I don't want to describe his bizarre adventures and give things away and I absolutely don't want to reveal much about the book's structure, which I loved.  I'm not sure everyone will love it, but I did. Let's just say that about 260 pages in, when you're wondering where the hell the story is going, caught up in it as you are but completely baffled as to where everything is leading, the plot takes a turn that nobody, and I mean nobody, could predict.  It's more than a mere plot twist also; it's a complete turning of the story, you could say, though at the same time it's a logical progression of everything that has gone before. You read through to the end, riveted by a tale that only gets odder and odder, and at the conclusion, there is a satisfying payoff, or at least I thought so. Some reviews of the book I've read since finishing the novel disliked the ending and indeed the entire direction the book takes from page 260.  I can understand the chagrin of those who didn't like where the book went, but if you like something adventurous, beautifully written, and just downright strange on almost every level, The Insult is a book you may enjoy.

And about my friend.  I've yet to discuss the book with him, but I'm eager to do so.  I'm wondering why he was so convinced I'd like it.  He was right about that, but it's not exactly because, as he seemed to be suggesting, The Insult takes a fascinating premise and develops it brilliantly.  I doubt he saw it as a crime novel I'd go for, because, as I mentioned, it's not a crime novel in a standard sense.  I'm not even sure, in all honesty, what the book is aiming at. It's the kind of story that is written with clarity and that provides a wonderful sensory experience but whose overall meaning is somewhat enigmatic. I do think that perhaps Rupert Thomson has subtly played with detective story forms in the book.  Both the first and second parts have to do with crimes, but the first part, shall we say, has a lot of ambiguity and an open-endedness, leaving lots of questions unanswered, while its second part also has to do with crime but answers everything clearly.  Is the author sort of presenting, in one book, both an anti-detective tale and a more traditional mystery?  Theme built around structure, if you will.  It's nothing more than a theory I have, and I'd love to talk to Rupert Thomson about it if I could.  That probably won't ever happen, but I'm looking forward to talking to my friend about The Insult when we next get together.  And I'll thank him, of course, for the recommendation.

Posted by scott adlerberg at 8:40 AM