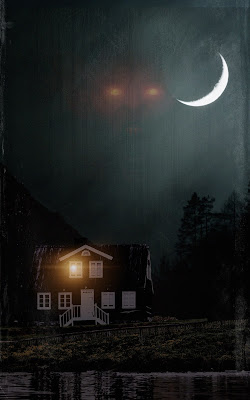 I've watched Midnight Mass twice. Once in one long marathon when it came out, and then again spaced out over a few days after I found I wasn't quite done thinking about it. I don't know that I can gather my thoughts together into a coherent essay, so let's call call this a random list.

There are certain things the show makes obvious. And I appreciated that. Marketing departments might find it helpful to withhold the V word, and to bury the 'reveal' until after the opening weekend, but the show doesn't really care how quickly you figure out the broad strokes. It seemed clear to me as soon as we got to the island that we were playing around a little with Salem's Lot. Giving us the best adaptation of the classic vampire novel while never being an adaptation. Sure, throwing in a few Needful Things, and some common touchstones of the genre, but I felt the Lot from the start.

Part of this is no doubt because Mike Flanagan is so effective at capturing the feel of early Stephen King. There's just something in the air, in the soil, in the shadows, of Flanagan's work that evokes the smaller moments of King's work. At this point it's not fair to keep reviewing him only in those terms. Flanagan, as with any of us, has his influences, but he's incorporated them into his own style.

I don't always engage with his work. I like Hush quite a lot, loved Hill House, but never really connected with Bly Manor and have yet to see Doctor Sleep. However, I always find things to like in the tone and the feel of his work. He creates lived-in spaces, and gives room for the actors to do the same. It's in their eyes, faces, and silences. The years bear down on them. The performances are stellar across the board, but I want to draw a special mention for Rahul Kohli for his use of silence and his instincts to trust his presence. Quiet acting is the most important ingredient in any ensemble piece, providing the glue that holds everything together.

As I said before, the show doesn't try too hard to hide things that don't need to be hidden. The more familiar you are with genre -and the sooner you know which specific horror genre the show is dealing in- you can see familiar beats, a story following the rules. But the real trick of genre is that, if you trust the viewer or reader to pick up on these things and don't try to hide them, you have license to treat these elements as your right hand, waving at the viewer, keeping their attention from all the things you're holding in your left. Midnight Mass does this perfectly. Some reveals are obvious, if you want to see them, but they only work to sneak other surprises in past you.

Addiction as shorthand for...

Something that often annoys me in crime and horror fiction is the use of addiction as shorthand for corruption or failure. All too often we see Checkov's monkey on a character's back, and start the clock ticking for the moment they fall, fail, compromise, or give in. In Midnight Mass we are presented with two alcoholics (well, I would say three, but that's a conversation for another time) in the show. And they both die. I guess there's room there for people to be angry that neither of them are allowed to make it out alive, but for me, on a deep level, I appreciated that they both died sober. None of us get out of life alive, but if we win our daily battles we can face death sober. Flanagan has been quite open about his own journey to sobriety, and I'm sure this part of there story was a conscious choice.

With a show that deals so much in religious themes, there will be plenty of better writers than me discussing them. For me, I revelled in the human questions at play. Whether there is a god or isn't is above my pay grade. And everyone's relationship to god is a personal matter. But down here on the ground we have questions to face over our relationships with each other. What god can forgive is out of our control, but what we can forgive is key to our quality of life and mental health. You come out of the show wanting to forgive most of the people for most things, and probably convinced that at least one person deserves to burn a lot longer than they do. There are many small beautiful moments of forgiveness that come once the horrors have been done. This is another level on which I'm sure Flanagan is discussing addiction and recovery. We shouldn't confuse redemption with forgiveness. That can get overlooked sometimes in the social media dissections of films and tv, about which characters do or don't get 'redeemed.' Forgiveness is a whole other deal. Nobody can -or should- ever force you to give it, but if you can, it's a kindness to both parties. And sometimes you also just need to forgive yourself, to be kind to yourself. Because kindness is so much of what it takes to make it through this whole 'life' thing.

Something that has always annoyed me about the film Signs is the moment M. Night Shyamalan stops trusting the audience. Throughout the movie we have been left to put the pieces -the signs- together. But during the final confrontation between the family and one lone, trapped, alien, we are given flashbacks to all of the pieces along the way. Pieces we had already put together ourselves. And, with that, we are also forced into seeing a clear position taken by the film - there is very much a god in the story machine.

Flanagan holds off from making this mistake. The conclusion is left to the viewer. If you look for a god in your material, then there are plenty of signs. We could see the way fate has moved all the pieces into place, from a car accident, an unexpected pregnancy, an oil spill, a stray bullet, cancer, and a child's conversation with her mother about clipping wings. We could see all of those moving parts lining up together and conclude that god made it happen. Or we can watch it without looking for the divine, and simply enjoy the drama. The conclusions are ours to draw.

One of the few criticisms I've seen online is that Pruitt's 'turn' back comes too quickly. One minute he's shouting from the pulpit about joining god's army, the next he's recognising the wolves in the darkness. But for me -and purely for me- this misses the point of the sermons. Each one is a conversation Pruitt is having with himself. The gods army sermon is an argument he's having with himself. One of the deep truths about addiction is self-deception. And on many levels, it's a deception the addict is always conscious of. They know they are lying too themself, at the same time as they are telling themself they believe the lies. All that happens here is that Pruitt reaches his moment of clarity, when he can no longer lie to himself.