I wrote a bit here a couple of years ago about the show Goliath, having then just seen its third season.  I recently finished watching its fourth and what is announced as its final season, and once again, I enjoyed it for its distinctive qualities, the very qualities that probably will always make it a hit or miss show for people.  This year, after seasons spent in Los Angeles and the California Central Valley, the scene switches to San Francisco and the goliath that lawyer Billy McBride takes on is Big Pharma.

As with each season, besides regulars Billy Bob Thornton, Tania Raymonde, and Nina Arianda, the cast is excellent.  Bruce Dern has a major part  (When is it not great to see Bruce Dern?), as does Jena Malone, and this was the first time in a while I've seen Eias Koteas in anything. J.K. Simmons is the main villain, and having him in that part means that the enemy will be absolutely and suitably formidable.  Simmons is never not good, over the years playing funny characters and kind characters and all sorts of different types of people, but he can't be beat as a nasty person.  And every time I see him as a nasty person, it brings me back to the first time I ever saw him, as Neo-Nazi Vernon Schillinger in Oz, a role in which he was so convincing it took me awhile after that to get used to seeing him playing non-malevolent people.  He's a greedy son-of-a-bitch in Goliath and yet believable, not quite over the top.  And make no mistake; he's got that great physical presence.  He's seven years older than I am, and I'd like to know what his workout regimen is, though I'm sure I can't match it. 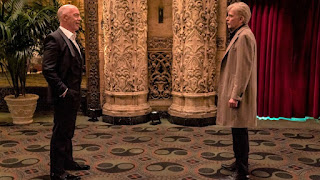 The thing about this show, something in particular I like about it, is how it has kept leaning into its low key yet unapologetic oddness.  This is especially true after season one.  The new season, though less trippy than season three, continues to push this vibe, with a number of sequences that straddle a borderline between "is what I'm seeing happening or is it remembered by someone or is it imagined inside Billy McBride's head". The legal twists and turns in the plot stretch plausibility, but this is part and parcel for the show, and in fairness, utter believablity in legal dramas, whether in film or on TV, is rare.  The show is not called Goliath for nothing, so that Billy and friends are going to win against the odds is a given; it's  merely a question of how, when everything seems to be going wrong, their victory will come to pass.  It's a tip off that the show's writers are self-aware and even playful when, in the current season, the climactic courtroom scenes blanch the screen of color and unfold almost in black and white.  What are we watching, Perry Mason?  No, but Goliath seems to be tapping into that kind of fun with the attorney machinations that transpire.  A conspiracy is unveiled and the evil of Big Pharma and how Big Pharma has pushed addictive opiods on the public is denounced in something close to melodramatic tones.  And yet it's not entirely straight-faced because, well, the last time you see J.K. Simmons, there's a screwball absurdity to what's going on.

The season also taps into a film noir mood more than the previous seasons (though, again, Goliath has gotten more and more noir in ambiance with each successive season), and it uses San Francisco's Chinatown with its back alleys and colorful lighting to atmospheric effect. 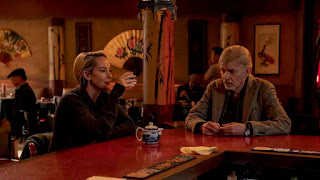 There's lot of rain, a retro jazzy quality to the soundtrack, and  a bar I would love to have as my local spot to chill in.  If season three tapped into David Lynch and Chinatown, the new one taps into Hitchcock a little, and oddly enough, mainly because of the color and lighting in the Chinatown scenes, there were parts that reminded me of Wim Wenders' Hammett (another work that's a full hit or miss for people).  All told, it's another go with the flow ride I was glad to take, and it had a conclusion, extended and dreamlike, that struck just the right liminal chord. Nice to see the series wrap up well.
Posted by scott adlerberg at 2:00 AM