Last week I found myself seized with the desire to return to the pleasure of honkaku mystery fiction, the Japanese fair play-mysteries I've come to enjoy so much.  After browsing online, I chose The Red Locked Room, a collection of the best stories of Tetsuya Ayukawa, considered one of the masters of this particular form.  All the stories -- there are seven -- date from the 1950s or early 1960s, and each involves either a locked room puzzle of some sort or a mystery that hinges on a suspect's apparently perfect alibi.  Amateur detective Ryuzo Hoshikage solves the impossible crimes and a professional, Chief Inspector Onitsura, is the one who breaks down the alibis. I've read five of the stories so far, and each one has been excellent. Ayukawa is both a master of illusion and an author who plays fair with readers, and the logic in his stories, as is so important in these type of stories, is impeccable.  The collection has an introduction about his career and the totality of his work, and it has a description of these type of mysteries I never before encountered but find illuminating.  The writer of the intro says that "In the eyes of Tetsuya Ayukawa, an alibi is basically a 'locked room in time.' A locked room on the other hand is 'an alibi in space'."  Well-put, and as the introduction says, "it is therefore only natural he [Ayukawa] was such a master of both the alibi trick and the locked room mystery." Motive features in these mystery stories but it is not the primary component. The key point is for the detective to figure out how something was done, and if that can be determined, the killer will be caught. The prose (in translation, needless to say) is clear, succinct, and easy to digest.

As I was making my way through these stories, I saw that Mike Flanagan's new series, Midnight Mass, had come to Netflix.  This reminded me that, having loved his adapation of The Haunting of Hill House, I've yet to watch the follow-up to that, The Haunting of Bly Manor, adapted from Henry James' The Turn of the Screw. The reason I'd put off watching Bly Manor was because I'd read that Flanagan had incorporated not only the James'  ne plus ultra of ghost stories in the series but a few of James' spectral tales I'd never read. I decided that I'd read "Owen Wingrave", "The Romance of Certain Old Clothes", and "The Jolly Corner" before watching the show and I'd re-read "Sir Edmund Orme".  Was it necessary to read all these before watching the series? I'm sure not, but I figured it would only enhance my engagement with Bly Manor.

Now a word about Henry James. He's an author who it does take effort to read.  No doubt about that.  That's true nowadays, and in all likelihood was true even when he was writing. I've still never read any of his novels (despite the many film adapations of his novels I've liked), but I count several of his short stories and novellas among my favories ever in those forms.  I'm talking in particular about "The Beast in the Jungle", which touches on lonliness and the sadness of an individual ordinary life with great power, and the creepy but moving "The Altar of the Dead", and his suspenseful story about a prying biographer trying to connive his way into getting important documents about his subject, "The Aspern Papers". In short doses, that James style, so dense, with such an emphasis on character developement and psychology, with all its analyses of motives and the shifting moods of the characters, I not only can tolerate but revel in.  And underneath all the decorousness of the lives of the people James talks about, there is often so much unalloyed darkness. This man knew lonliness, that's for sure, and understood disappointment and how rarely life lives up to one's highest expectations.  Combine that darkness with his complicated mind and prose and you get the recipe for great ghost stories, of which, in the classically suggestive vein, he is among the best. 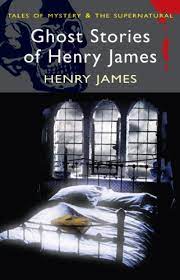 Since taking a break from the honkaku stories, I've read "Owen Wingrave" and "The Romance of Certain Old Clothes", and it's been a pleasure to go from one mode of storytelling to another.  The mysteries end with bracing solutions (wrongdoers caught, order in the world temporarily restored); the James' ghost stories end on stark and abrupt notes of terror and death.  Nothing is purged in these tales and the past, if anything, has only served to exert a malign influence on the present.

As I write this early in the morning, about to take the subway to work, I'm thinking I'll read on my commute the sixth of the mysteries in The Red Locked Room, before, tonight, or more likely tomorrow, going back to James. It's not only the swtiching between the mysteries and the ghost stories that's fun, but also going back and forth between the Jamesian prose and the uncluttered language of the Japanese stories.  Call it a daily literary speedball.

Posted by scott adlerberg at 7:35 AM