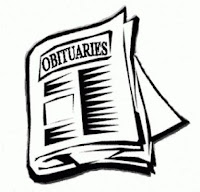 Today we have another installment in my occasional series, People I Wish I’d Known. I read the newspaper obituaries regularly,* and every once in a while, a person leaps out at me. This edition is especially good, because I’ve got several fascinating lives to share with you.

My attention was first caught by Elmer “Curly” Bunfill. How could it not have been, with a wondrous name like that? Mr. Bunfill passed away earlier this month at the age of 108. (That is not a typo.) His family points out that he was a survivor of two pandemics, the current one and the 1918 Spanish Flu. Can you imagine? He supported, including 10 siblings, during the Great Depression and then served in Pacific Theater in World War II, surviving nine major battles, which his family proudly details. Read the full obituary here.

The next entry takes us to another aspect of World War II, one that I see too horribly often in obituaries of people in this age range of Japanese descent. Ralph Hiroshi Nishimi passed away just short of his 92nd birthday. Eighty years before, at age 12, he was interned by the U.S. government at Tule Lake in Northern California during World War II. Once he was released, he finished high school and then graduated from U.C. Berkeley with a business degree. After that, he served in the Army. Again, this is where someone’s life details make me stop and think. What did Mr. Nishimi think about serving the same government that imprisoned him without cause for many of his teenage years? I would love to know.

He had a lifelong love of baseball, playing in the Army and coaching Little League later on, and golf, which he particularly enjoyed playing with his sons. He spent almost six decades in the financial services industry and was married to Ruby Mizuno Nishimi for 65 years. That’s quiet a life. Read the full obituary here.

Our final person today is Delores Johnson, who was born in Mobile, Alabama in 1953, and moved to Sacramento, California, in 1965. She spent most of her career in education, working as secretary in elementary schools and then as administrative secretary and other administrative positions at the school district level. She caught my eye because I’ve spent some time in school offices, and let me tell you: there is no crazier place. Upset parents, sick kids, misbehaving students, lost lunches, stressed-out teachers. I’ll bet she saw it all, and I wish I’d known her to hear her stories. She is survived by a son and daughter, seven grandchildren, and eight siblings. Read the full obituary here.

* I’ll talk in another post about how useful obits are for a writer's creativity and characterization. For now, I'll just leave it at this--they're a wonderful celebration of the specialness inherent in every life.