A book I am happy to have contributed an article to, called Dangerous Visions and New Worlds: Radical Science Fiction 1950-1985, is due out in October. The title sums up what the book will be about, and my contribution is an extended piece on the great Soviet-era, Russian science fiction writers, the Brothers Strugatsky. For the next month or so, the publisher PM Press is running a pre-sale campaign via Kickstarter, and I just wanted to mention something about the whole enterprise here. 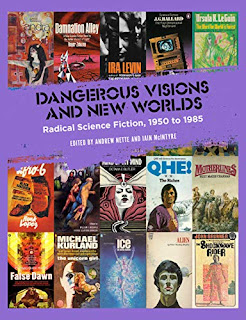 Dangerous Visions and New Worlds celebrates and evaluates how science fiction novels and authors depicted, interacted with, and were inspired by cultural and political movements in America and Great Britain. Edited by Andrew Nette and Iain McIntyre, this is the third book in their series which includes Girl Gangs, Biker Boys, and Real Cool Cats: Pulp Fiction and Youth Culture, 1950 to 1980 and Sticking It to the Man: Revolution and Counterculture in Pulp and Popular Fiction, 1950 to 1980.

Much has been written about the “long Sixties,” the era of the late 1950s through the early 1970s. It was a period of major social change, most graphically illustrated by the emergence of liberatory and resistance movements focused on inequalities of class, race, gender, sexuality, and beyond, whose challenge represented a major shock to the political and social status quo. With its focus on speculation, alternate worlds, and the future, science fiction became an ideal vessel for this upsurge of radical protest.

Dangerous Visions and New Worlds starts with progressive authors who rose to prominence in the conservative 1950s, challenging the so-called Golden Age of science fiction and its linear narratives of technological breakthroughs and space-conquering male heroes. The book then moves through the 1960s, when writers, including those in what has been termed the New Wave, shattered existing writing conventions and incorporated contemporary themes such as modern mass media culture, corporate control, growing state surveillance, the Vietnam War, and rising currents of counterculture, ecological awareness, feminism, sexual liberation, and Black Power. The 1970s, when the genre reflected the end of various dreams of the long Sixties and the faltering of the postwar boom, is also explored along with the first half of the 1980s, which gave rise to new subgenres, such as cyberpunk.

The book contains over twenty chapters written by contemporary authors and critics, and hundreds of full-color cover images, including thirteen thematically organized cover selections. Besides the Brothers Strugatsky chapter, there are new perspectives on novels and authors such as Octavia Butler, Ursula K. Le Guin, Philip K. Dick, Harlan Ellison, John Wyndham, Samuel Delany, J.G. Ballard, John Brunner, Judith Merril, Barry Malzberg, and Joanna Russ. There are excavations of topics, works, and writers who have been largely forgotten or undeservedly ignored. If the first two books in this series are any indication, this new one should be fascinating, as well as beautifully put together, and any pre-orders will be much appreciated.

This will be a 224-page, full-color, large-format book, and the PM Press Kickstarter to encourage pre-orders will include all sorts of rewards, including other books by the coeditors, related titles and combo packs, and the chance to "upgrade" to a hardcover at any level and add-on the limited throw pillow and handmade high-waisted underpants (yes, undies!) featuring Retro SciFi Pulp Book Cover fabric.

To learn more about the Kickstarter, you can click here: https://www.kickstarter.com/projects/ww3/dangerous-visions-and-new-worlds.

Posted by scott adlerberg at 8:35 AM