An Interview With Heather Levy

A little more about Heather: 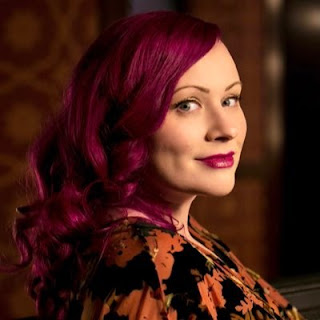 Big thanks to Heather for letting me throw a few questions her way.

AC: Now that we're a few days past the big day (WALKING THROUGH NEEDLES released on 6/29, but you all knew that already, right?), how are you feeling?

HL: I'm still feeling pretty overwhelmed, mostly in all the good ways because of the kind, supportive messages I've received from friends, family, and readers. I know I may come across as an extrovert on social media, but I'm far from it. I actually have pretty bad social anxiety, so I've had to mentally prepare myself before every book-related event, even the virtual ones (thank the gods for edibles!). Otherwise, I'd come across as a complete nervous mess. Shit--I probably still do! More than anything, though, I feel relieved that I accomplished this thing I've wanted for so long. Everything else is gravy.

AC: I'd like to dive a little into your path to publication. When did WALKING THROUGH NEEDLES come to you? Did it take a while to solidify?

HL: I first started writing WALKING THROUGH NEEDLES during my time at Oklahoma City University's Red Earth MFA program. The idea came to me after I had written a non-fiction series on human sexuality for Literati Press, one dealing with BDSM. I've been open about my masochism, and I wanted to show this strong female character whose masochistic sexuality was already formed at a young age before an abuser enters the picture to manipulate it. And there are so many misconceptions about the lifestyle, so I knew I wanted to address some of those issues in the novel as well. Once I had Sam's voice in my head, the rest poured out.

I had no idea I was writing in the mystery/thriller genre, not until my mentor, author Lou Berney, said it was feeling solidly noir. I had read plenty of mysteries and thrillers, but I never set out to write in any particular genre; I only wanted to write the best damn story I could.

AC: One aspect of the book I really enjoyed was your use of chronology. Was it a challenge to write two distinct timelines in the story?

HL: This might sound nuts, but it wasn't a challenge at all. It felt completely natural to me. I'm a pantser all the way, something I've been trying to move away from, but I'm probably kidding myself. I so want to be the writer who has everything mapped out ahead of time, but it's not me. I know the major plot points going into a project, but I like scenes to flow organically as much as possible getting to those points.

AC: WALKING THROUGH NEEDLES is also pretty unflinching at certain points, even triggering. There's been a lot of talk around content warnings on social media, especially among writers. Is this something you considered when putting this story together?

HL: Personally, I think it's the job of the writer and publisher to make sure a book's description is as clear as possible about possible triggering content. That doesn't necessarily mean placing trigger warnings on books, which I think is overkill if a book's jacket tells you what you're getting into. WALKING THROUGH NEEDLES is a dark book dealing with some heavy topics, including sexual abuse, and I believe the jacket description clearly indicates this. That said, it's impossible to satisfy every reader on this issue. Some people want content warnings on books similar to those placed on music albums, but I feel books, like music, should push boundaries and openly discuss those difficult topics. I think there's a happy medium without placing so many restrictions on creativity.

AC: On to the evergreens! What are you reading now? What writers are out there that need to be on everyone's shelf?

HL: There's so much! Of course, I've touted P.J. Vernon's twisty, batshit crazy gay thriller BATH HAUS and S.A. Cosby's brutal yet sensitive RAZORBLADE TEARS, and they are both some of the nicest people around. I also recently read Laura McHugh's WHAT'S DONE IN DARKNESS, which made my gothic noir-loving heart sing (she's always so good), and Zakiya Dalila Harris's fantastic, ominous debut THE OTHER BLACK GIRL, which I would be shocked if it's not on the screen by next year. And Cynthia Pelayo's CHILDREN OF CHICAGO is a book I still think about. I've never read anything like it, that combination of horror, police procedural, and dark fairy tales into this ball of intensity.

AC: Do you listen to music while you write? Anything in particular? If not, do you have any rituals you just NEED to have going on before your fingers start typing?

HL: I listen to music while I'm getting ideas down and during some drafting, but I get way into music to the point where it's a distraction when I'm deep into the process. I'm always listening to music I love, but I try to think of what my character's would listen to rather than my own preferences. For instance, in WALKING THROUGH NEEDLES, I listened to a lot of music from my teen years since I grew up around the time of my two protagonists, Sam and Eric. So, I was digging into music like Cocteau Twins, NIN, Tool, and Siouxsie and the Banshees. Right now for my current WIP, I'm listening to a lot of Animal Collective, The Dodos, St. Vincent, and Fever Ray as well as some pop music like Dua Lipa--lots of danceable music with an electronic edge--for one of my characters and a lot of singer-songwriters like Joni Mitchell and Daniel Rossen for another character. I don't really have set rituals because my writing time is dictated by my kids and full-time day job. I may have fifteen minutes to write one day and hours the next, but it's never set.

Posted by Angel Luis Colon at 2:00 AM