Beau is on the hunt

“A bounty hunter, his underworld criminal sister, and a dead body stuffed in a gun safe. What could possibly go wrong? In Boise Longpig Hunting Club, Nick Kolakowski unleashes a sordid and delightfully twisted tale of double crosses, revenge, and good ol’ redneck justice. Like the bastard child of Joe Lansdale and James Lee Burke, this one is well worth the sleepless night you’ll spend captivated.” —Joe Clifford, author of the Jay Porter thriller series and The One That Got Away 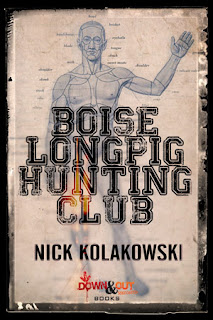 Get yours
Posted by Steve Weddle at 8:01 AM